After the explosive “90 Day Fiance: Happily Ever After?” tell-all reunion special that aired on August 15, some viewers may have had enough of Angela Deem’s antics. Angela and her husband Michael Ilesanmi already have a somewhat tumultuous relationship, making them great fodder for the TLC reality show that feeds on iffy couplings.

First, there’s the 22-year gap in their ages, with the American-born divorcée Angela being 52 years old when she and Nigerian-born Michael, who was then 30, first appeared on Season 2 of the show (per Screen Rant). She also apparently thought he was a scammer (too many emails from “Nigerian princes”?) who was only interested in her for her money and/or a visa — and yet she got hitched to him anyway, convincing him to leave his country and move to the U.S. Michael was also unsupportive of Angela’s decision to get multiple weight-loss surgeries, perhaps because “they don’t have surgeries over there,” as she told Us Weekly. Add to all that the difficulties inherent in long-distance relationships, as Michael is still in Nigeria and hasn’t yet received approval to come to the states.

The reunion special revealed even more stress added to the couple’s problems, much of it brought up by Angela herself. With some shocking revelations (because, of course) and bad behavior on her part, fans of the show are now sounding like they’re done. Keep reading to find out what Angela did.

Is Angela cheating on Michael, or just jockeying for screen time? 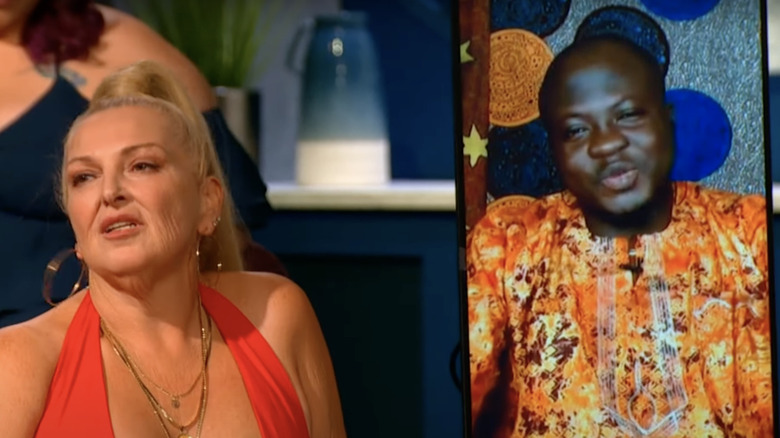 As Angela Deem showed off her new body on the reunion special”90 Day Fiance: Happily Ever After?”, her husband Michael Ilesanmi complimented her and said he wanted her to be healthy. She responded by complaining about how unsupportive Michael was about her surgeries, and how he made fun of her breast reduction by saying they were now too small. She apparently took that criticism to heart — or at least to her chest — because she got implants to bring her bosom closer to its original size, a procedure Michael apparently supported.

Sparks really flew when Angela revealed, per Us Weekly, that she had spent some time alone with plastic surgeon Dr. Michael Obeng. It seemed shady when the doctor left his own birthday party early to give Angela a ride home — leaving her daughter Skyla behind — and Michael got angry, telling Angela she should marry the doctor instead. When Michael’s Aunt Lydia got involved, Angela blew up, threatening to “get with Dr. Obeng” and flashing her new knockers at the camera while telling Michael that he’ll never see them again.

Commenters on Reddit pointed out Angela’s abusive, manipulative behavior, thinking they’re probably playing the system to extend their time on air. “Dr. Obeng is probably about to get his own show,” one response said. Another said, “All fabricated to try and stretch her 15 minutes of fame into something else.” Though viewers are potentially fed up with Angela’s behavior, the real question remains: Will they continue watching it?