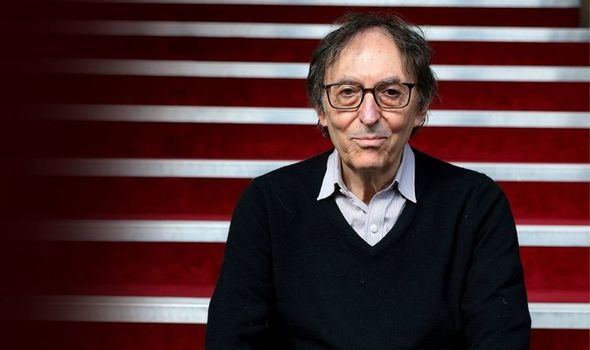 Don had been feeling under the weather when Clive visited him at home in west London. “He said I didn’t look too bright,” the 83-yearold recalls. “So I went to have a hot shower and, when I came out, I was still shivering. Clive insisted I get into his car – this was late at night – and he drove me straight to the Chelsea and Westminster Hospital.”

Tests revealed Don had contracted Covid. “They admitted me straight away, gave me a room on my own, and then pumped me with a whole range of antibiotics as well as giving me oxygen through a nasal tube.”

But despite the medical intervention, his condition deteriorated sharply. Although Don didn’t register quite how ill he was, he admits: “I now know that Clive and his brother, Grant, thought they might lose me during one 24-hour period.”

However, he was in good hands. “What amazed me was the compassion of the NHS staff,” he says. “Everyone was so kind. A lovely nurse stroked my head and said, ‘Now, you sleep well and don’t worry about anything’.”

Thankfully, after nine days in hospital, the man who wrote three James Bond theme tunes, including Diamonds Are Forever and The Man With The Golden Gun, as well as the Oscar-winning song for Born Free, was on the mend.

Don, whose real surname is Blackstone, continues: “One day, the head nurse said to me, ‘You’ve got very soft hands, Mr Blackstone.What did you do for a living?’

“So I told her I was a songwriter and, when she wanted to know what I’d written, I told her to Google me.”

When he was discharged, staff put Don in a wheelchair. “The doors opened and, like you see a million times on TV, the corridor was lined with a dozen or more people clapping. And then – one of the most emotional moments of my life – they sang Born Free. It had obviously been rehearsed. It brought a tear to my eye then and it does now.”

About six months later, Don had an X-ray on his lungs and got the all-clear.

“But then they asked if I’d like to see the state of my lungs when I’d been admitted to hospital. I couldn’t believe it,” he says today. “They looked like a scene out of Syria.The consultant said I was the luckiest man alive.

“All of this made me appreciate even more what the NHS had done for me, never mind the after-care. Then Clive said to me one day that he wanted to do something in support of the hospice movement and hat upand their wonderful work. And that’s when I asked if there was anything I could do. ‘Yes,’ he said, ‘you could write a song and the proceeds from the sales could be donated to charity’. So I sat down and wrote the lyrics for You Are Loved.”

Don contacted his friend, Debbie Wiseman, award-winning composer of a string of TV scores – everything from Wolf Hall and Inspector Lynley to Judge John Deed. “She quickly came up with this very touching tune.”

It’s as poignant as it is simple. And that’s no mean feat, he says. “Irving Berlin used to say: the hardest thing is to write something simple.”

So who best to record the song?

Last year, comedian, singer and TV presenter Jason Manford presented Don with an Olivier Lifetime Achievement Award. “We got on well. He doesn’t sing much but he’s got a hell of a voice,” recalls the songwriter.

Re-enter Clive Black, who explains: “I knew Jason was a fan of Dad’s so, to hook him, I sent him an email headed: ‘I’ve got a new Don Black standard for you!’

“He said yes immediately and, even with his busy schedule, he managed to clear time to record his vocals in a studio near his home in Manchester.”

Jason needs little prompting as to why he was so keen to record the song. “I just love Don Black,” he says. “He’s such a genius so for him to ask was a huge privilege. The song is beautiful and for it to be raising money for a group of people who work so incredibly hard – not just during the pandemic, but always – was a huge honour.”

Gloria Onitiri, currently singing up a storm as the Godmother in Andrew Lloyd Webber and Emerald Fennell’s reworking of Cinderella in London’s West End, also came on board to record the song. “I recorded the track on my own at home,” says Gloria.

“But then it was decided it would work better as a duet which is how I I came to sing it with Jason. Not that we were ever in a studio at the same time. In fact, we’ve never met! Clever music producers put our vocals together.”

Says Jason: “I’m very proud of the end result. Gloria sounds gorgeous and Debbie has done an amazing job with the music. I think it’s both poignant and catchy.”

Gloria is also keen on its simplicity: “Its message is universal and timeless. And I think the sentiment ‘You Are Loved’ – particularly given what’s happened to the world in the last 18 months – is really important.

“I also very much support the decision of the royalties going to Hospice Aid. I often think that hospices don’t quite get the recognition they deserve and yet what they do is so important. It would take a special person to work there.”

What is happening where you live? Find out by adding your postcode or visit InYourArea

Jason agrees. “My dad was a carer for many years when I was a kid and I could see the stress he was under most days. I hope this song helps highlight an often forgotten yet hugely important part of our society.”

A spokesman for Hospice Aid was full of praise for the initiative.

“What Don Black, Debbie Wiseman, Jason Manford and Gloria Onitiri, along with so many others, have done for Hospice Aid UK is truly amazing. We work tirelessly on behalf of all UK hospices that need our financial support to care for loved ones in their final days. Hospices took a financial battering during the pandemic and some are still on the very edge.

“You Are Loved has been written especially for us and all sales proceeds to the charity will help make a real difference to the future stability of the movement.”

The whole experience has been an inspiration to Jason. “After the year we’ve all had,” he says, “I’ve decided to do three Christmas concerts this December in London, Salford and Nottingham with Joe Stilgoe’s Band to get people in the festive mood. I’m really looking forward to performing an evening of songs.”

Last word to Don Black: “I’m thrilled with the way You Are Loved has turned out,” he says. “My own story could have ended very differently. So, it’s nice to think that out of something bad has come something good.”