Few couples in Hollywood can match the level of Blake Lively and Ryan Reynolds’s Instagram banter. The couple, who will welcome their fourth child in 2023, are happy to do some social media flirting — and let their combined 82 million Instagram followers read along.

On Wednesday, Ryan posted a video to Instagram of himself learning a dance routine as part of his preparation for a role in Spirited, his new Christmas film with Will Ferrell, which hit theaters earlier this month.

Captioning the clip, Ryan wrote, “You’ve got to be willing to be bad at something if you want to be… slightly less bad at it? Here’s Will and I proving that point! We’re so humbled by all the love for #Spirited on @appletvplus.”

Ryan seemed to be taking the dance very seriously — and doing a pretty good job! — while Will brought levity to the proceedings by wearing a “Stay Classy” tee shirt that referenced another of his iconic comedies, 2004’s Anchorman.

Blake was quick to appear in Ryan’s comments, asking the tongue–in-cheek question, “Can you get pregnant while pregnant??” Clearly that comment hit a receptive audience, as tens of thousands of fans liked her comment within hours!

And Blake wasn’t the only one giving Ryan immediate, positive feedback. Director Ava Duvernay wrote, “Why’d I smile through that whole clip?” Katie Couric, meanwhile, lent her support to Will. “Will’s got moves,” she wrote. Kerry Washington, meanwhile, wanted the extended cut. “I would watch an entire film of just the dance rehearsals,” she quipped. 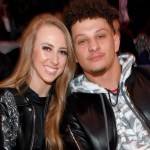 Blake and Ryan aren’t strangers to a good back-and-forth on social media. They once had a lengthy exchange about Ryan’s extremely chiseled trainer, in which Blake joked about “swiping right” on the fitness expert. Then there was their all-in-good-fun “feud” of 2017.

But, more often than not, the couple are straight-up adorable on social media. And the best example of that may have been from earlier this year, when Ryan celebrated Blake’s 35th birthday by posting nine photos of their sometimes glamorous and sometimes low-key life together.

The gallery was a range of pictures, from the red carpet of the Met Gala to the couch at home, where Blake lounged with random pieces of a leafy green on her face. To accompany that post, Ryan sweetly wrote, “Happy Birthday, @blakelively. You’re spectacular. I’m not sure if you were born or invented. Also, thank you for urging me to leave the house every now and again.”

These celebrity fathers are all proud to be “girl dads.”