The magpie that saved a miscreant: Abandoned as a baby by his bohemian father, Charlie Gilmour struggled with depression, drugs and a prison sentence for violent disorder until a tiny bird helped him fly free of his demons

BOOK OF THE WEEK

Featherhood, it would be tempting to say, is where Helen Macdonald’s H Is For Hawk meets Gerald Durrell’s My Family And Other Animals.

But Charlie Gilmour’s memoir is so original and ingeniously wrought, it stands on its own as a book to which others will surely be compared.

His creation of Benzene — a baby magpie so named because of the Bermondsey scrapyard where she was found ‘with its puddles of petrochemicals’ — is as vivid and endearing as anything in the classics of animal literature. 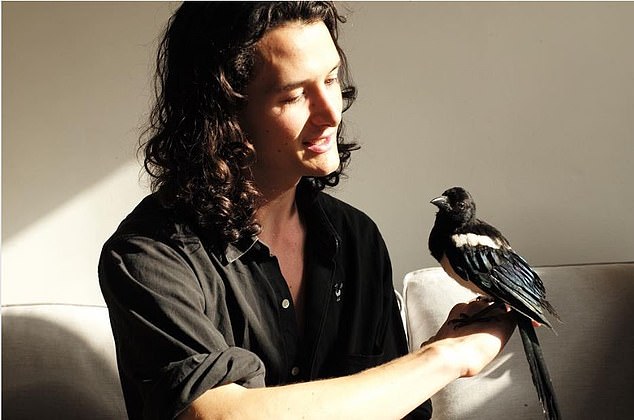 It’s not surprising, particularly if you believe in nature as well as nurture, that Gilmour has a facility for graceful expression.

Featherhood is about Gilmour’s bids to track down the father who abandoned him at six months after a nervous breakdown: ‘Heathcote cut me and my mum out of his life like a tumour. He didn’t visit, didn’t write, never sent a birthday card.’

But it is also as much about raising Benzene until she is ready to be released and flies away.

The memoir is cleverly divided into headings relating to Benzene’s growth — Pin Feathers to Flight Feathers to Blood Feathers, then Nest And Egg — parallelling Gilmour’s own.

The two years when Gilmour and girlfriend, Yana (now his wife and mother of their baby), bring up Benzene (bringing her back to life, being dependable,) and the writer’s thoughts on his own life mirror his questions about nature versus nurture: who is his birth father and why did he ignore his only son? 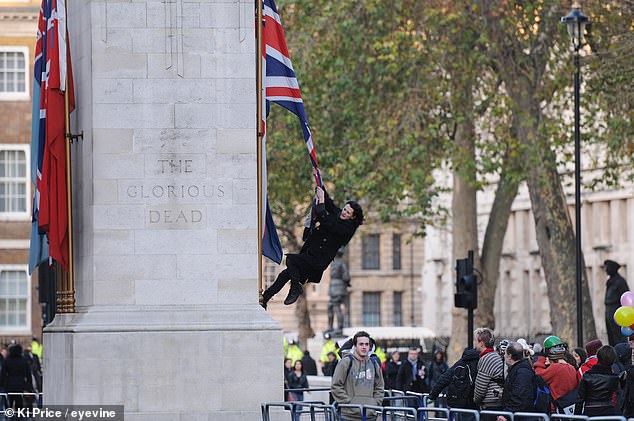 Gilmour’s crash came at the student tuition fees protest demonstration in 2010, where he was filmed swinging on the flag at the Cenotaph 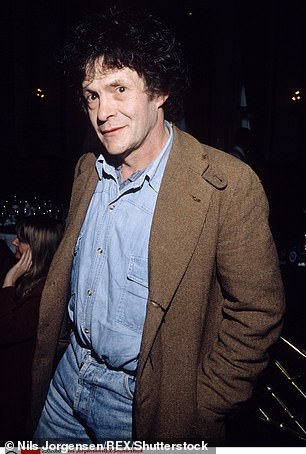 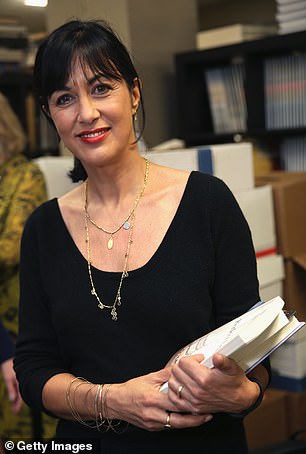 Two gifted writers, the late Heathcote Williams and novelist Polly Samson, are his parents. Heathcote abandoned him at six months after nervous breakdown

Heathcote emerges as a figure who is as repellent as he is compelling.

His first book The Speakers — published when he was barely out of his teens — was praised by literary behemoths Anthony Burgess, William Burroughs and Harold Pinter.

This early promise was followed by another literary surge, around the time of Gilmour’s birth, with the bestselling Whale Nation (the book Samson was involved in as a publicist, where she met and fell in love with its author), Falling For A Dolphin and Sacred Elephant.

There was a time when the poet was enough of a catch to hook model Jean Shrimpton, the great beauty of her day.

An enduring part of the Heathcote legend is that, after The Shrimp left him for another swain, he set light to himself on her doorstep. 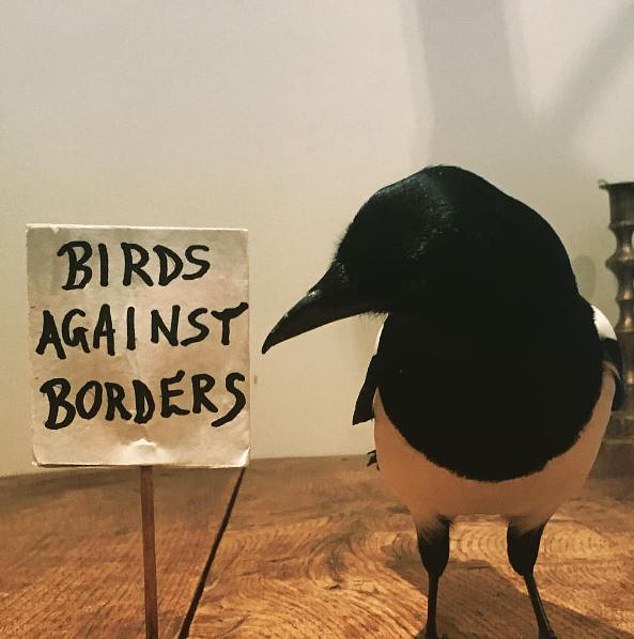 The sad truth that emerges in his son’s book is that, behind the colourful stories and melodrama, the anarchist poet had serious mental problems, starting when he was 23 and a patient at a therapy centre in France, ostensibly for alcoholism, and progressing to suicide attempts, another spell in his 30s in Springfield Hospital for the mentally ill, and the breakdown after Charlie’s birth.

Gilmour shows skilfully how rejection can become a form of addiction for the wounded child constantly returning for more: ‘It was a complicated longing.

A feeling of guilt and shame. A bird beating its head against a windowpane.’

Heathcote would agree to meet his son, then disappear, blanking his child for years at a time.

Gilmour’s first encounter with his birth father was at age 12, followed by another at 17 and the pivotal one, when he was a 20-year-old student.

After this visit he was left feeling empty and at fault, as Heathcote told him there was no parental obligation or explanation due on his part because ‘well, you were an accident’ — and all the time, ‘his eyes were begging me to leave’.

Each disappearance was more upsetting than the last, Gilmour writes, and only at the end of Heathcote’s life was there a glimmer of reconciliation, when the old man, with his filthy fingernails and gnarled knuckles, grasped his son’s hand as he lay dying in hospital. 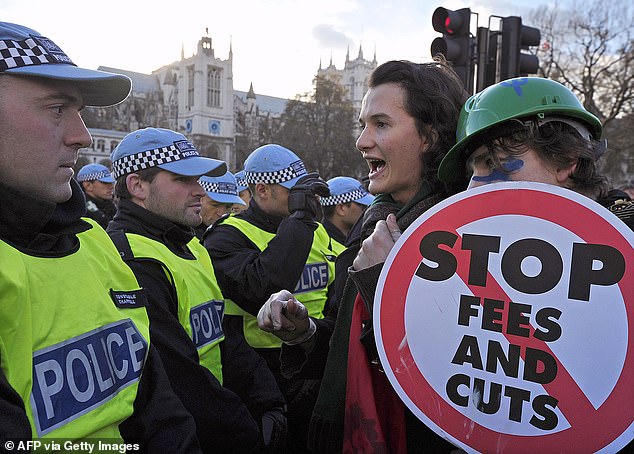 Gilmour’s first encounter with his birth father was at age 12, followed by another at 17 and the pivotal one, when he was a 20-year-old student. Pictured: Gilmour at a student protest against tuition fees in 2010 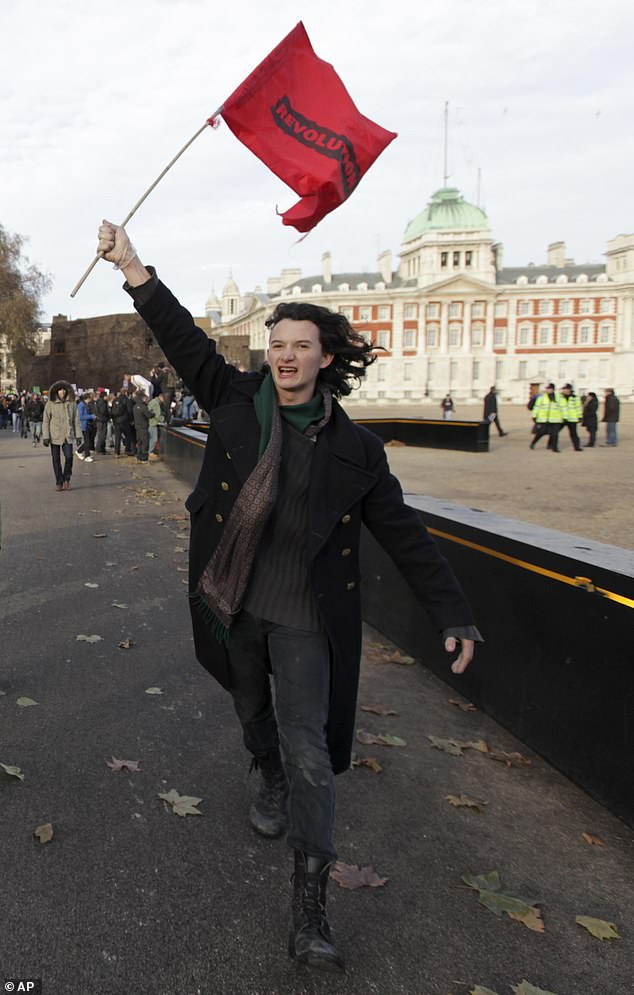 During the 2010 protests, Gilmour was pictured carrying a flag which read ‘Revolution’

Gilmour’s crash came at the student tuition fees protest demonstration in 2010, where he was filmed swinging on the flag at the Cenotaph and which led to him, aged 21, being given a 16-month prison sentence for drugs-related violent disorder (he was released after four months).

Gilmour reveals the circumstances leading to his behaviour — after that painful meeting with his father, he suffered his own breakdown and was in a full manic drugs psychosis.

As he points out, it might have been more appropriate for him to have been sent to a mental hospital, like Heathcote, instead of prison.

What is so clever about the balance of the book is that just as your heart feels like it is being crushed by the sadness of the boy’s attempts to be accepted by his father, the narrative returns to Benzene.

And she is such a cheeky, curious character. She even seems to have a sense of humour — and she can talk!

When Charlie’s maternal grandmother, a former major in Chairman Mao’s army, tries to teach the magpie to say ‘F*** Trump’, Benzene couples ‘Come on’ with the President’s name, squawking ‘Come on, Trump!’, thereby suggesting — embarrassingly, for Charlie and his family — that the family are Number One fans when he is their least favourite President.

Gilmour’s language is as precise as his gaze is forensic. He is something of a magician himself, conjuring whole vivid personalities with a few deft strokes of his pen.

He can slay you with his succinct summoning of a small boy’s struggles, such as when, as a child, he met people who told him they knew his father: ‘Oh really,’ I’d reply brightly. ‘What’s he like?’ 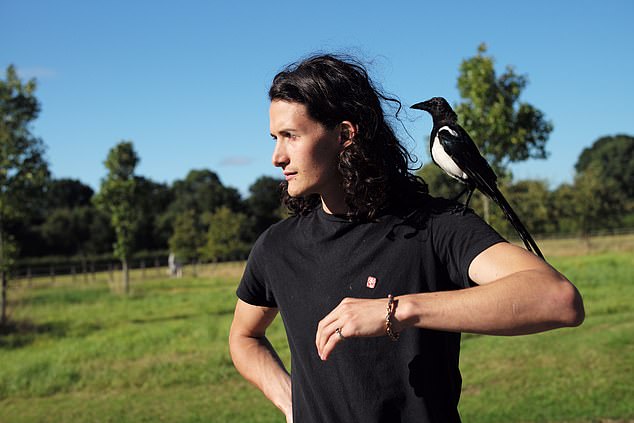 Gimour can dazzle you with the gem-like images of nature he creates which, like all writers who draw you into their orbit, thrum with life

And he can dazzle you with the gem-like images of nature he creates which, like all writers who draw you into their orbit, thrum with life.

Benzene’s new ‘purple-shining feathers emerge like amethyst from a cave wall’. She sits at the highest point of an oak ‘dripping gold in the sun.

The oak’s . . . leaves seem almost liquid in this light; fresh and wet as an emergent luna moth’s wings.’ 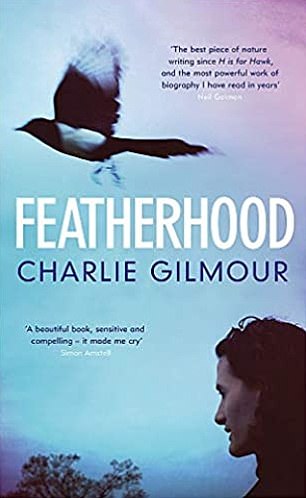 Every line shows considered thought but never reveals the hard chiselling behind it.

When Heathcote left his son and partner with no warning after a happy day in the bluebell woods, it was spring: ‘The year’s new leaves unfurled and his mind unravelled.’

Throughout, in the background, is the steady, unmercurial figure of his adoptive father, David Gilmour, who married Samson when Charlie was an infant.

As a rock star best known for Pink Floyd, he nevertheless lacked the tainted glamour of Williams — precisely because he was always there for his son.

This memoir is remarkable in many ways, one of which is that the reader understands how much it takes to achieve the maturity to realise what being a father means: the recognition — which finally frees Charlie — that ‘who your father is, isn’t who you have to be. Nurture trumps nature. It has to.’

By the end, you may find yourself looking at that magpie in your garden in a whole new way, too.