Lawyers for policemen accused of bashing a Melbourne pensioner have failed in their last-minute bid for a magistrate to recuse herself before she delivers her ruling in the case.

Senior constables Brad McLeod, 33, and Florian Hilgart, 41, and Constable John Edney, 28, are all facing unlawful assault charges and a decision about their case was expected to be handed down on Tuesday.

The trio allegedly pepper-sprayed, punched and hosed down pensioner John in his Preston front yard on September 19, 2017. Victoria's Independent Broad-based Anti-corruption Commission investigated the matter after The Age published CCTV footage of the incident. 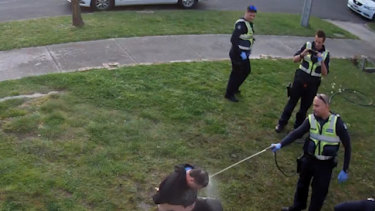 Ms Lamble said she intended to find senior constables Hilgart and McLeod guilty, but did not say on which charges.

She did not tell the court whether she also intended to find Constable Edney guilty. Her ruling has been adjourned until Friday.

Ms Lamble indicated she would amend her ruling, but the error did not "cause me to change my mind".

The magistrate said she was "not prepared to entertain" the submission for her to recuse herself, as it was not in the interests of justice. She said her ruling was not a draft for the defence lawyers to comment on, but was sent as a "courtesy" so they could prepare for pre-sentencing submissions.

"To open the door to this argument undermines the effectiveness of the court system," Ms Lamble said.

"The interests of justice will be seriously undermined."