Mette Harrison, a novelist who also works in the financial industry, was blindsided in 2020 when her husband of 30 years asked for a divorce. A mother of six, she estimated that she also lost half of her friends between those who ghosted her and others who expressed judgment about the break-up.

According to a 2013 longitudinal study headed by Brown University scholar Rose McDermott, if people in your close social network divorce, the risk of your marriage ending greatly increases. This may partially explain why those in marriage meltdowns find themselves abandoned by their nearest and dearest. But loved ones disappearing may also be because they just don’t know how to help. 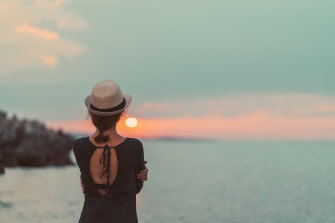 On top of the loss of her marriage, losing friends was nearly too much, said Harrison, now 51. But when those who stuck by her offered help, she was also flummoxed. “I didn’t know what I needed even when people asked,” she said.

One friend offered a bed until Harrison could find an apartment; another walked her gently through a frank assessment of her financial situation. A third texted every day for a year — a simple back and forth that Harrison said she depended on to calm her panic in the early months. Her older brother, Mark Ivie, set up a recurring monthly payment for rent and food, in addition to an Amazon wish list, which he shared with other family members.

“I absolutely would not have been able to make it without his help,” Harrison said.

From grand gestures to small acts of kindness, experts say that there are many ways to help those slammed by the shame, shock and economic panic of a separation or divorce.

Listen … again and then again

Although it is often assumed that those in an initial separation need space, Ashley Mead, a psychotherapist based in New York who specialises in divorce, recommends connection. But the right kind of listening takes finesse.

“Divorcees are losing the person they have been most connected to in their whole life,” Mead said in an email. “They are often desperate and feel incredible shame.”

“Show up,” added Mead, who recommends refraining from offering advice, suggestions or any hint of, “I told you so.” If you don’t know what to say, try this: “I know I can’t fix it but I am here for you,” she advised. “We have a tendency to want to fix bad things for our friends, but trying to cheer someone up is often about calming our own discomfort and doesn’t help those trying to relieve hard emotions.”

Erika Anne Englund, a divorce mediator based in California said to “be the type of listener that helps people reach their own conclusions: Ensure your friend has a place to vent, cry, laugh and think out loud.”

“Don’t stop inviting divorced friends to parties just because they are single, and call them on holidays even years after the divorce is over,” Englund said.

When Amy Armstrong, a family therapist in Ohio, US, went through her own divorce, finding friends able to listen without turning her story into drama — or gossip — was a lifeline. “A supportive person helps you see yourself in a bright next chapter, not someone who urges you to complain or stay in victim mode,” she said.

Stéphane Jutras, who lives in Canada and hosts the podcast “Divorced Dad Diaries,” divorced in 2018. When he talked about it with friends, he noticed they became more intimate and opened up about relationship issues that they had previously kept guarded. “As I shared, they felt safe to talk about their marital problems,” Jutras said.

In sourcing a team of supporters, Susan Pease Gadoua, a therapist in California who also runs ongoing divorce support groups, recommends turning to people unafraid of strong feelings or the time it may take to process them. “People have a two to four-month bandwidth for dealing with others’ pain, but recovering from divorce in less than six months is fast,” she said.

For those who question their conversational skills, good listening does not necessitate nonstop chatter. Watching a movie together can be greatly comforting, as can talking while hiking. “Don’t trash talk, cheerlead or problem solve,” said Abby Medcalf, a psychologist in Berkeley, California, and founder of the podcast “Relationships Made Easy.”

“Connect with the feeling, not the situation,” Medcalf said. “Ask, what’s making you the saddest, the angriest, the most fearful?”

“Then, listen hard, with full attention,” she said.

Offer a hand, or just validation

Divorce often means that driving a car pool, paying bills and many other requirements of daily life now land on one set of shoulders, not two.

“Divorce is a huge life transformation. Helping in small ways can have a lasting impact,” said Mandy Walker, a divorce coach and mediator in Colorado.

Looking for creative ways to offer support? Consider what soft skills you might have. Can you babysit one night a week? Can you edit a résumé? Know something about car repair? Are you handy? If you can’t offer your own skills, putting together a list of vetted fix-it folks can be helpful.

Feelings of grief and loss after a separation or divorce are a normal part of the healing process. There is a timeline to divorce recovery, Medcalf said, and keeping track of incremental shifts in feeling can be helpful if a divorced friend or family member is too distraught to see improvement. “The most generous thing you can do is put your own fear of strong feelings aside and nudge people from despair,” she said.

The economic impact of almost every divorce hits hard; studies show that income may drop, especially for women. Details around spousal and child support take months and sometimes years to get ironed out. And even if granted, there is no guarantee of those payments. According to a 2018 US census report, fewer than half of custodial parents who are owed child support receive what they are awarded, and there is little recourse for most in these situations.

Sydney Petite left her marriage in July 2018 with three children, including 3-month-old twins. Now the sole custodial parent, she was awarded support from her ex-husband but didn’t receive any payments for nearly three years.

“I learned — awkwardly and quickly — how to ask for help,” said Petite, 30, who heads a public relations company in Alabama. A friend lent her money to get a lawyer, a private school offered her oldest son free tuition and a nanny hired to help with the children deferred payment until Petite gained economic traction. Since divorcing, the former stay-at-home mother has paid back all her loans. “I am where I am today because of unexpected support,” she said.

This article originally appeared in The New York Times.

Most Viewed in Lifestyle