HENRY DEEDES: Old pals? Alex Salmond said Nicola Sturgeon did him up like an Arbroath kipper

As acts of revenge go, it was sleep with the fishes, severed horse head in the bed stuff.

A Sicilian double-tap to the temple. Godfather author Mario Puzo would have struggled to concoct anything quite so vicious.

Alex Salmond’s long-awaited appearance in front of the Scottish parliament’s harassment committee was savage, with no holds barred. In other words, everything we had hoped for and more. Pure popcorn. 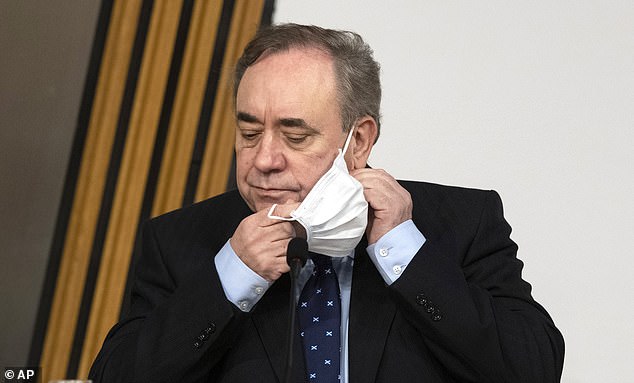 Mr Salmond might have looked a relic of his old self but his opening statement was a zinger. Cabers tossed everywhere. Och, he was cross

Over the course of a marathon six-hour session, Scotland’s ex-first minister tore great juicy chunks off his successor, Nicola Sturgeon, effectively saying she wasn’t fit to lead the country in her stroppy stomp towards independence.

By the time we were done, one of British politics’ formerly most formidable double acts was left looking like a pair of warring crime family capos, hell-bent on destroying one another. And all played out on national TV to boot.

Our location for the day was Holyrood’s Robert Burns room, which – like the rest of the building – was a drab, sterile-looking place.

First impression of the one-time don of Scottish politics as he raised a chubby paw and began reciting the witness oath? Broken.

Chief among his accusations was that during the Scottish government’s unlawful 2018 investigation into sexual harassment claims made against him, he was the victim of a conspiracy orchestrated by Miss Sturgeon, his one-time protegee

Gone was that chucklesome, mischievous character of old, features flushed with boisterous bonhomie, who loved to tweak Westminster’s tail. The face was now grey and jowly, the hair wispy and unkempt, those once-twinkly eyes hardened and strangely lifeless.

Mr Salmond might have looked a relic of his old self but his opening statement was a zinger. Cabers tossed everywhere. Och, he was cross.

Chief among his accusations was that during the Scottish government’s unlawful 2018 investigation into sexual harassment claims made against him, he was the victim of a conspiracy orchestrated by Miss Sturgeon, his one-time protegee.

She’d done him up like an Arbroath kipper. Shades of Frankenstein’s monster turning against the creator.

Mr Salmond told the committee the Scottish government had acted illegally during the investigation into complaints made against him ‘yet somehow no one’s to blame’.

‘Scotland hasn’t failed – its leadership has failed,’ he said. Oh, to have been a bluebottle on the wall over Bute House, official residence of the First Minister. Bet Miss Sturgeon’s poor put-upon looking hubby, Peter Murrell, was getting a right lughole bashing. He’s the chap who’s also chief executive of the SNP. Yes, it’s a right wee world north o’ the border.

Mr Salmond spoke slowly and patiently. Occasionally there would a pause for a slurp of water. He’d been waiting for this moment a long time.

He reminded the committee that he had been offered stacks of interview opportunities over the past couple of years, all of which he had declined.

‘Which the committee will know has not hitherto been my policy,’ he said. Too right. Time was when Mr Salmond would crawl through an open sewer for a slice of air time.

Eventually the committee was allowed to begin its grilling. Cripes, it was slow cricket to start with. We heard gloopy queries from an SNP frump called Maureen Watt, who peered over her specs at Mr Salmond as though she were contemplating an iffy oyster. Clearly a Sturgeon goon.

Mr Cole-Hamilton was clearly a man with a keen eye on the next day’s headlines, asking Mr Salmond if he wished to say sorry about his past behaviour.

Repeatedly, the committee’s matronly convener Linda Fabiani (SNP) had to interrupt to remind him that Mr Salmond wasn’t on trial. He’d done all that and been acquitted.

Mr Salmond’s frustration at this flagrant showboater was palpable. ‘Is it possible to get down the key details?’ he asked at one point, clearly irked.

This first session went on for more than two hours. It was long old slog. Eventually Miss Fabiani called for a break so that the room could be doused with disinfectant.

In the second half, things picked up quickly. 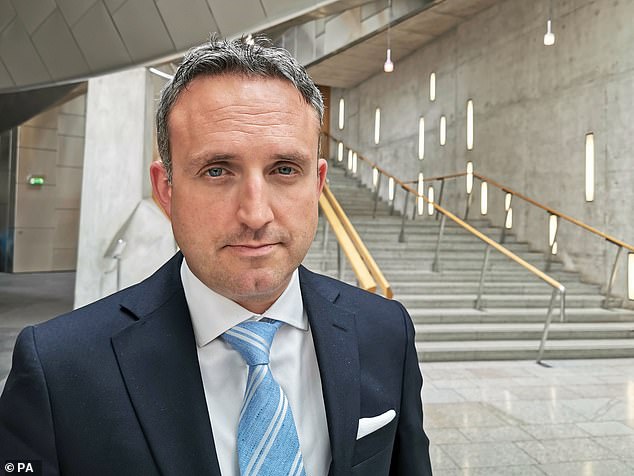 A flashy Lib Dem called Alex Cole-Hamilton was up next. Slick beggar. Pristine suit, perfect hair. Wore a pocket square. Tsk, tsk. A sure sign of frivolity. Mr Cole-Hamilton was clearly a man with a keen eye on the next day’s headlines, asking Mr Salmond if he wished to say sorry about his past behaviour

Mr Salmond informed the committee that during the investigation into complaints against him there had been a ‘deliberate suppression of information inconvenient’ to the Scottish government.

There were claims about the police and witnesses in his case being put under pressure. Explosive stuff. Stuff, if true, that would shame tinpot dictatorships.

Not once throughout the course of the afternoon did Mr Salmond seem to wane. This was a performance fuelled by years of pent-up aggression. Whatever you say about him, his mastery of detail was impressive. The only time he sagged came at tea time when he had to take a bathroom break to clear his troublesome chest.

On and on the committee pressed. Jackie Baillie (Lab) asked Mr Salmond whether he had forgiven Miss Sturgeon for her handling of the investigation into him. ‘No,’ he replied succinctly.

Originally, we were supposed to be done by 4.30pm. It was 6.30pm when Miss Fabiani eventually wrapped things up. Mr Salmond looked like he could have gone on all weekend spitting strychnine about his former colleagues.

Miss Sturgeon is due to return fire next Wednesday.

Fasten your seatbelts. This could get a little bumpy.