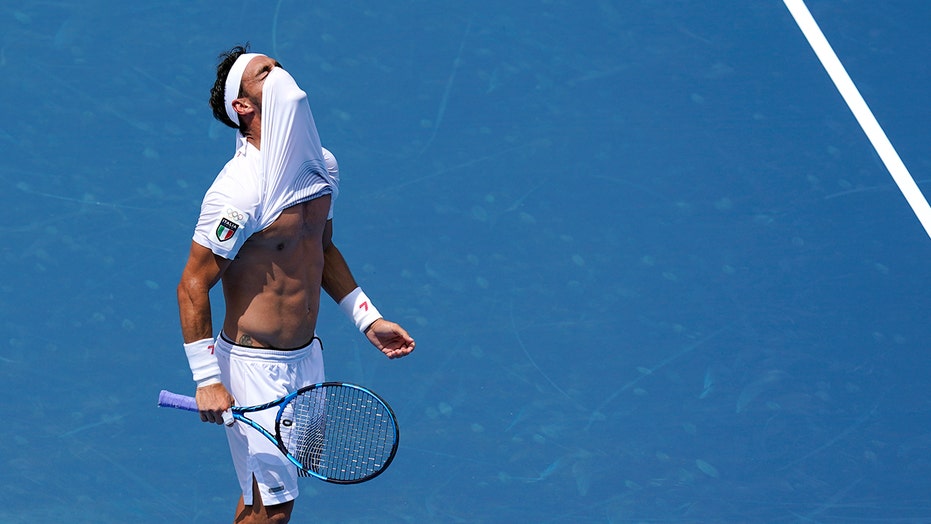 Fognini used the Italian slur repeatedly in a three-set loss to Medvedev. He repeatedly slammed his racket in frustration and later put it into a trash can.

On Thursday, Fognini apologized in an Instagram Stories post saying the heat was affecting him and he “used a really stupid expression toward myself.” He made the post on a rainbow background.

“Obviously I didn’t want to offend anyone’s feelings,” Fognini said. “I love the LGBT community and I apologize for the nonsense that I let out.”

Medvedev was also affected by the heat. At one point during the match, the chair umpire asked if Medvedev would be able to continue.

“I can finish the match but I can die,” Medvedev replied. “If I die, are you going to be responsible?”

After two medical timeouts and one visit from a trainer, Medvedev closed out the match with a 6-2, 3-6, 6-2 win over Fognini.

In response to the growing criticism and concern for player health, the International Tennis Federation announced Wednesday that matches going forward will be played later in the day to avoid the heat.

“In the interest of player health and welfare and following extensive consultation, the ITF has announced a change of schedule due to the increasing heat and humidity being experienced in Tokyo, Japan,” the statement read.

Japan is known for experiencing some of its most extreme heat in the months of July and August. Daytime highs regularly hit 95 degrees but have exceeded 104 degrees in some places in recent years.

Fox News’ Paulina Dedaj and the Associated Press contributed to this report.