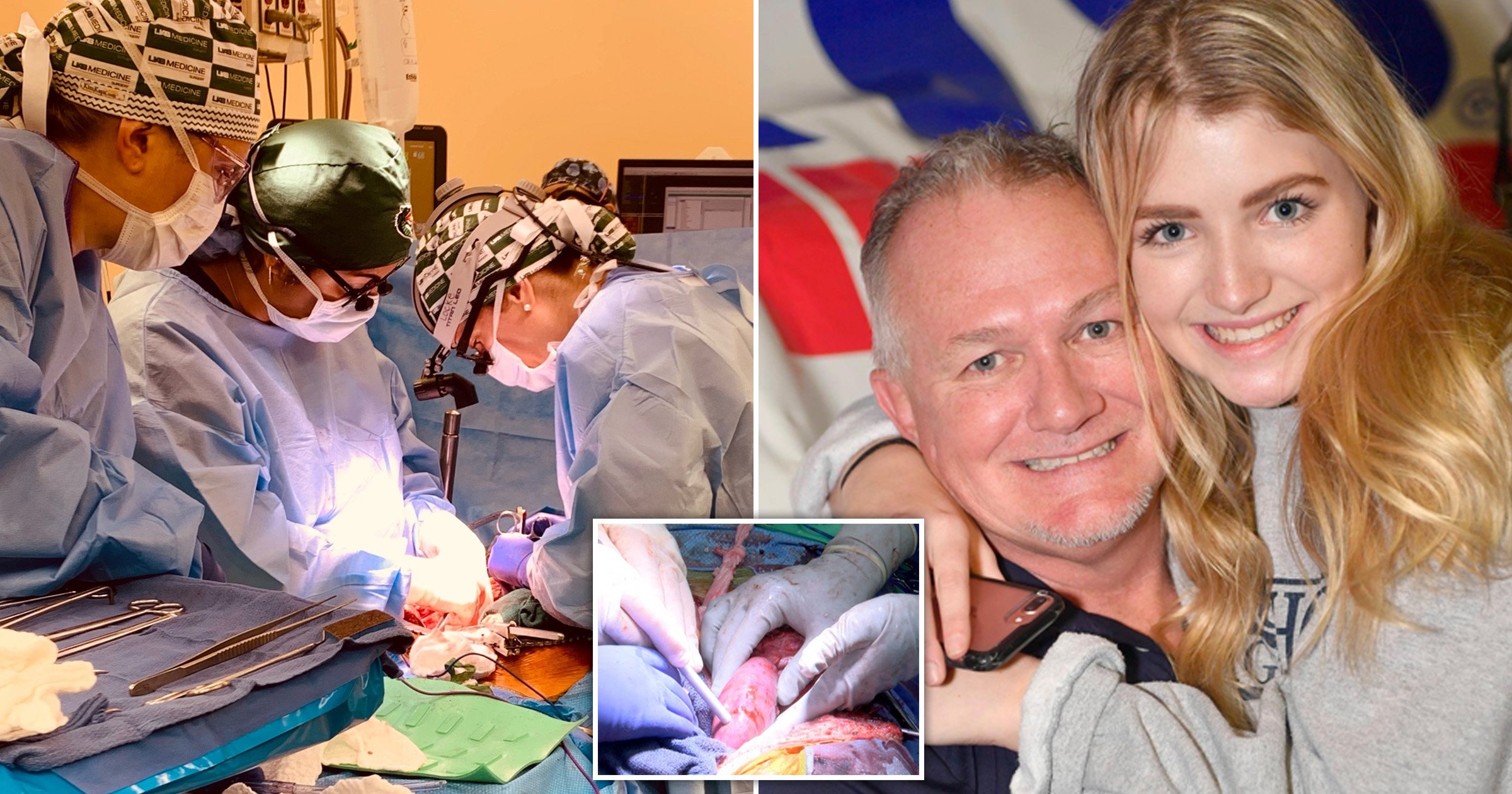 Surgeons have transplanted two kidneys from a genetically modified pig into a human in a world first.

The organs worked for more than three days during an experiment on a brain dead patient.

Jim Parsons, 57, was already on artificial life support – with acute kidney injury and no prospect of recovery.

The breakthrough could solve the organ shortage crisis as people on the waiting list are dying every day.

Senior author Dr Jayme Locke, of the University of Alabama at Birmingham (UAB), said: ‘This game-changing moment in the history of medicine represents a paradigm shift and a major milestone in the field of xenotransplantation, which is arguably the best solution.

‘We have bridged critical knowledge gaps and obtained the safety and feasibility data necessary to begin a clinical trial in living humans with end-stage kidney failure disease.’

Scientists have dreamed of xenotransplantation, in which organs from animals are put into humans, for decades.

Pig heart valves are already widely used in humans. The natural lifespan of a pig is 30 years, they are easily bred and have organs of similar size.

Earlier this month a US man became the first person in the world to get a a pig heart. David Bennett, 57, is said to be doing well.

Genetically-modified pig kidneys have been extensively tested in non-human primates.

Dr Locke said: ‘This human preclinical model is a way to evaluate the safety and feasibility of the pig-to-non-human primate model, without risk to a living human.

‘Our study demonstrates major barriers to human xenotransplantation have been surmounted, identifies where new knowledge is needed to optimise xenotransplantation outcomes in humans, and lays the foundation for the establishment of a novel preclinical human model for further study.’

Ten key genes that would have led to the kidneys being rejected were knocked out in the donor animal.

Mr Parsons’ family gave permission for the four hour procedure to go ahead at the university’s Legacy of Hope Donor Recovery Centre.

The kidneys filtered blood, produced urine and, importantly, were not immediately rejected.

They remained viable until the study was ended, 77 hours after transplant.

Mr Parsons was a registered organ donor. He had longed to have his organs help others upon his death – but they were not suitable.

So he was maintained on a ventilator to keep his body functioning. His native kidneys were removed, and replaced with the pig’s.

Dr Locke said: ‘Mr Parsons and his family allowed us to replicate precisely how we would perform this transplant in a living human.

‘Their powerful contribution will save thousands of lives, and that could begin in the very near future.

‘Mr Parsons’ gift honours his legacy and firmly establishes the viability, safety and feasibility of this preclinical model. Because of his gift, we have proposed this to be known as ‘The Parsons Model.”

Mr Parsons’ ex-wife Julie O’Hara, and their children, Ally, David and Cole, made the decision, along with his sisters and mother.

Ms O’Hara said: ‘Jim was a never-met-a-stranger kind of guy who would talk to anyone and had no enemies – none.

‘Jim would have wanted to save as many people as he could with his death, and if he knew he could potentially save thousands and thousands of people by doing this, he would have had no hesitation.

‘Our dream is that no other person dies waiting for a kidney, and we know that Jim is very proud that his death could potentially bring so much hope to others.’

Dr Locke said: ‘A radical solution is needed for the organ supply crisis. The domestic pig is a promising organ source.’

There were no changes in Mr Parsons’ DNA – or transmission of porcine retroviruses.

Importantly, the organs produced urine – liquid waste created by metabolism during the cleaning of blood.

The recipient’s abnormal creatinine levels – a metabolic indicator of kidney function – returned to normal after the transplant.

Vascular health was also maintained at normal blood pressure – which is significantly less in a pig than a human.

They pave the way for a Phase 1 clinical trial at Alabama for patients with end-stage kidney failure.

Nearly 107,000 people in the US are waiting for organ transplants – most needing a kidney. Wait times average three-to-five years.

In the UK, about 7,000 people are on the list – over half of whom want a kidney. Last year, more than 470 people died while waiting for an organ.

Ethical concerns over merging man with other animals have been debated for over a century.

In The Island of Doctor Moreau, an 1896 sci-fi novel by H.G. Wells, a mad scientists turns experimental animals into strange-looking humans.

In October a single pig’s kidney was given to a brain dead woman during a two-hour operation in New York. The results are expected to be published in a medical journal once they have been peer-reviewed.

The Food and Drug Administration in the US has approved the use of GM pigs for this type of research.

Their hearts, lungs and livers could be commonly given to patients needing transplants within the next ten years.

Professor Selwyn Vickers, dean of the UAB Heersink School of Medicine, said: ‘Along with our partners, we have made significant investments in xenotransplantation for almost a decade hoping for the kinds of results published today.

‘Today’s results are a remarkable achievement for humanity and advance xenotransplant into the clinical realm.

‘With this study, our research teams have also demonstrated the decedent model has significant potential to propel xenotransplantation forward.’

A spokesperson said: ‘There is still some way to go before transplants of this kind become an everyday reality.

‘While researchers and clinicians continue to do our best to improve the chances for transplant patients, we still need everyone to make their organ donation decision and let their family know what they want to happen if organ donation becomes a possibility.’