The nation’s taxpayers are shouldering the burden of paying for the federal government’s budget plans, accounting for the highest share of tax revenue this century as company tax receipts collapse in the wake of the coronavirus pandemic.

In a development that puts pressure on the government and the opposition to deal with the tax burden being carried by ordinary workers, personal income tax will account for 52¢ of every dollar of tax in 2022-23 and 2023-24. 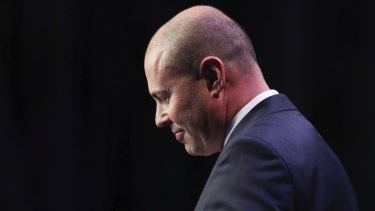 It is a record level for the Coalition since it came to office in 2013 and well north of the 46¢ in the dollar that Labor dealt with in the immediate wake of the global financial crisis in 2009.

Much of the burden will weigh on middle and high-income earners, who already account for the lion’s share of personal income tax. But even the government’s 2024-25 tax cuts, which will deliver the most benefit to higher-income earners, will still leave PAYG earners responsible for 50¢ of every dollar of federal tax raised.

Including this year, taxpayers will pay the government a record $1.2 trillion in personal income tax over the forward estimates.

The government has argued since its election that it has set a limit to its total tax take, saying this will help protect individuals and companies from high tax levels.

The government expects to collect $228 billion in personal income tax this financial year before the figure falls to $219.4 billion in 2021-22. By the following year the government is forecasting the amount to reach a record $236.6 billion.

At that point, personal tax will account for 52 per cent of all government tax collections.

Other taxes that fall largely on workers are also expected to climb over coming years. By 2022-23, GST collections are tipped to reach an all-time high of $75.2 billion while tobacco excise – the government’s fourth-largest individual tax – is predicted to reap $14.6 billion.

That will take the tax impost on workers and consumers to 71.7 per cent, the highest level this century.

It’s a different story for company tax collections, which over the same period are expected to fall from $93.3 billion this financial year to $70.4 billion in 2022-23. Between that year and 2024-25, the government is forecasting company tax to jump to $100.5 billion as the economy recovers and stimulus measures come to an end.

Even at that point, personal tax collections will account for half of the government’s tax take while company tax will amount to 19¢ of every dollar of tax.

Treasurer Josh Frydenberg, pressed on whether the offset would be continued until its 2024-25 tax cuts begin, said the government could only make decisions based on the facts immediately at hand.

The extension of the low and middle-income tax offset was a form of stimulus, the Treasurer said.

“It’s not a permanent feature of the tax system.”

Shadow treasurer Jim Chalmers said the extension of the offset gave tax relief to millions of workers only until just beyond the next election.

“[It’s] another illustration this budget is about getting through an election rather than helping people with the cost of living,” he said.