Where was Abstract Mindstate all these years? That’s a question that Chicago has had as long as “What if Bartman never tried to catch the ball from Alou?” — and to find the answer, you’ll have to take it back to the early 2000s.

Abstract Mindstate was a key part of the buzzing Chicago rap scene back then, the best-kept secret in a city that was starting to get more national attention. As a rare male-female duo, Olskool Ice-Gre and E.P. da Hellcat combined inspirational, soulful rap with the urgent pacing of a Run the Jewels song. They were poised for mainstream success, but their short and influential career was over by 2005.

Now, they’re back, working together with a certain mega-famous producer who grew up listening to their music. Dreams Still Inspire, the first Abstract Mindstate album in more than a decade, will arrive August 6th on YZY SND, the new label run by Kanye West, who also produced the full LP. It’s been a long time coming, and Abstract Mindstate is poised to pick up where they left off.

“It was all Ye,” Ice-Gre says. “I tried to inspire him by sending him some raps and instead, it made him think that the world needed Abstract Mindstate again.”

When Abstract Mindstate had their first moment, Chicago was finally being recognized as a major rap region, no longer a place known mostly for how brick the winter was. Common had been dismissed by the West Coast just a few years earlier after wondering where hip-hop had gone; now Twista was on his way to becoming bigger by wearing Coogi sweaters and talking to the ladies quickly. A producer-turned-rapper named Kanye Omari West was rapping through the wire. Chicago had broken out, and its artists were using  that “nobody loves us” mentality to their advantage. Abstract Mindstate was going to be next.

Gre and E.P. had met in college at Jackson State in Mississippi; their debut record, We Paid Let Us In!, was funded by contest winnings that the duo had accumulated from rap battles. “This black man done felt it all/from the shackles, to the nightstick to the cracks on them cold cell walls,” Ice-Gre rapped on “Pain.” Abstract Mindstate was talking to black people in the way that Public Enemy would, in the way that Common would, and with a humanity fit for a Spike Lee film in miniature.

After Gre took some time to work with Kanye on the “Through the Wire” video, Abstract Mindstate’s second album, Still Paying, came out in 2005. They recall being told that it would receive the best marketing possible. But they say they never saw any of the money, as is sadly typical for the industry. “I had spent hundreds and thousands of dollars on my art, and none of it on myself,” Gre says. “It fell apart. I didn’t have anything to show for it. I had to move back in with my mom.”

Gre got a job as the first A&R executive at Kanye’s G.O.O.D. Music, while E.P. worked toward a masters degree at the University of Cincinnati, eventually becoming a behavioral analyst. After a few more mixtapes, Abstract Mindstate was no longer. 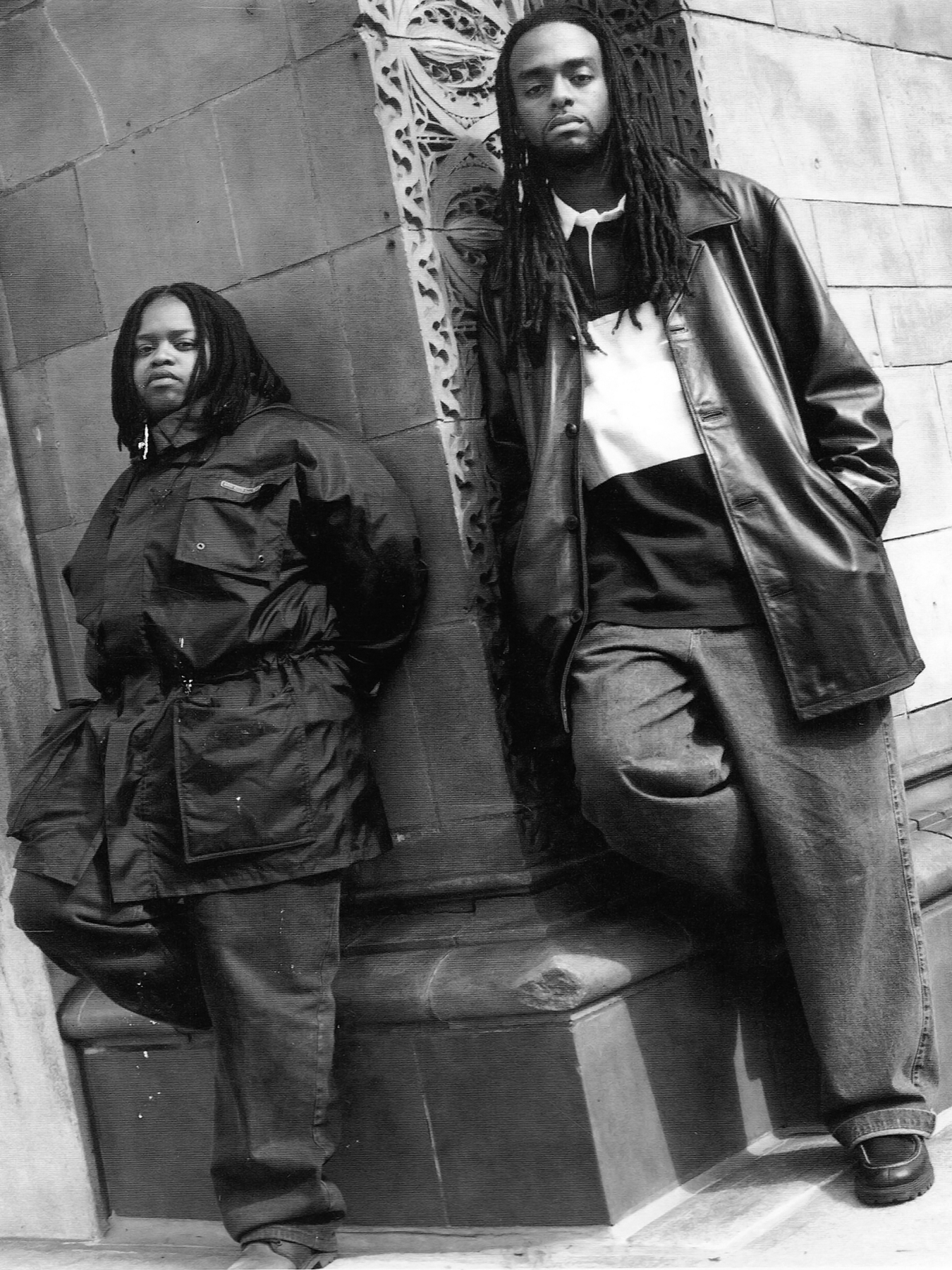 Both Gre and E.P. have a sense of clarity in life, the way it takes us wherever and you roll with the punches. As recently as last year, they weren’t thinking about making music again.

Then, in Wyoming, Mr. West had an idea. He called Gre and said he wanted to make some beats for Abstract Mindstate. Gre thought his old friend was joking. “To be honest, it wasn’t our decision,” Gre says. “Ye curated the whole situation. He said, ‘The world needs Abstract Mindstate. Y’all going to save minds and heal hearts. The time is right now.’”

E.P. feels the same way. “It wasn’t our idea,” she says. “Where we were, energy-wise, it was something divine. We weren’t thinking about Abstract Mindstate. We were still talking to each other as friends, but Abstract Mindstate wasn’t in our minds at all. Timing is so divine.”

She adds: “There is only one person who could have gotten me to do this, and it was Kanye. I wouldn’t have done it for anyone else. But it has been therapeutic. I didn’t realize back then how much I didn’t value the creative part of my life, and how much I needed it to vent. So I needed it for me.”

Kanye made about 300 beats, and gave Gre and E.P. 100 to work with. Legendary producer DJ Clark Kent, whose resume includes Jay-Z’s Reasonable Doubt and more, joined in on the fun, too.

When Gre called E.P. to tell her that Kanye wanted to fly them out to Los Angeles and make a record, it took some convincing. For her, Kanye was once the little homie with dope production who was trying to rap. All these years later, he is a controversial superstar with a musical legacy as rich as David Bowie’s. In the same way that Gre thought Kanye was joking at first, E.P. thought Gre was joking. “I didn’t have any expectations,” she says. “This is Kanye now. Not the same person we recorded with before.”

E.P. ‘s life had continued since Abstract Mindstate disbanded. “Music was my love, but then I had family things,” she says. “I had lost my baby brother. I had to be an auntie and a sister, and a cousin. That was all bigger than just music.” Even when she got on board to record the new album, she had to fit in time to take an exam for her career in behavior analysis. “I had to study like crazy to pass the board-certified test,” she says. “We had already started recording the album. My room was half exam notes and half rhymes. I was trying to remember rhymes and study notes. I didn’t have a life besides those two entities. The completion of the project was so rewarding.”

She also found that songwriting was harder than it was when Abstract Mindstate first came out. Their music had always been personal and reflective; it had a hinge of pain to it, like they felt the suffering in the weight of their cold city. “Back then, we were just writing about our lives, our pain,” E.P. says. “Greg never stopped writing. It was like pulling teeth for me. Some days I was in tears — [thinking about] all these dope rhymes I used to write, and now I can’t write a verse. What is crazy is my father was dying during this. When he passed, the rhymes started flowing in.”

Gre, meanwhile, felt that he had already sacrificed everything for music. The industry had chewed him up, and it had taken years to feel like he was back on his feet. “I got my life back, and man, I was like, do I wanna fuck with this rap shit again?” he says. Kanye had always asked him about coming back to music, and ultimately he felt that anything that gave him so much pain and pleasure at once was worth it. Once he came back, it was water turning into wine again.

The new album combines the sped-up soul samples that Abstract Mindstate and Kanye perfected in the mid-2000s with the wider world of sounds that Kanye started evolving toward with 808s & Heartbreak and into in the 2010s. It also has a twinge of the holy spirit music that Kanye has started to produce in more recent years. “The Brenda Song” features the best E.P. verse on the record: “I know what the streets know/Who you think I speak for?” “Elevation” sounds like something you might have heard in an Anthony Bourdain No Reservation episode. E.P. talks about changing your toolbox if you can’t build. Gre is mysterious here — “We speaking on that mentally, spiritually, gotta be, more than what the eye can see” — while dismantling social media, capitalism, and haters.

They still inspire as well as anyone can. Abstract Mindstate coming back together is a celebration. The pain is gone, the love is back. They love Kanye, because he was the homie that looked up to them and now wants to bring them back to the forefront. They love music, because it is the bond that brought them together. They love God, because that is the divine spirit that brings the rhymes together. They love one another, because they are a family that have been through a lifetime of ups and downs together. Listening to Gre and E.P together again, you get the feeling that Mr. West was right about saving minds and healing hearts.