Middle-aged people can reduce their risk of premature death by more than two-thirds by walking just 7,000 steps on a daily basis, a study has concluded.

Experts from the University of Massachusetts Amherst had 2,100 adults aged between 38–50 wear an accelerometer from 2005 to 2006.

The team then monitored the patients’ health outcomes for an average of 11 years.

Those who walked 7,000 steps daily had a lower risk of early mortality than their sedentary peers  — 70 and 63 per cent, respectively, for black and white adults.

A gender difference in the effects was also observed, with the risk of early death falling more in women (at 72 per cent) than in men (at 58 per cent).

However, the researchers noted, there was no similar associations between step intensity and a reduced risk of premature death.

The findings add to the evidence that the 10,000 steps goal — popularised by a marketing campaign for a Japanese pedometer back in 1965 — is a bit of an overkill.

Getting regular physical activity comes with significant health benefits for many conditions — including cardiovascular disease, diabetes and various cancers.

The World Health Organisation recommends that adults get at least 150 minutes of moderate-intensity physical activity weekly, or 75 minutes of vigorous activity. 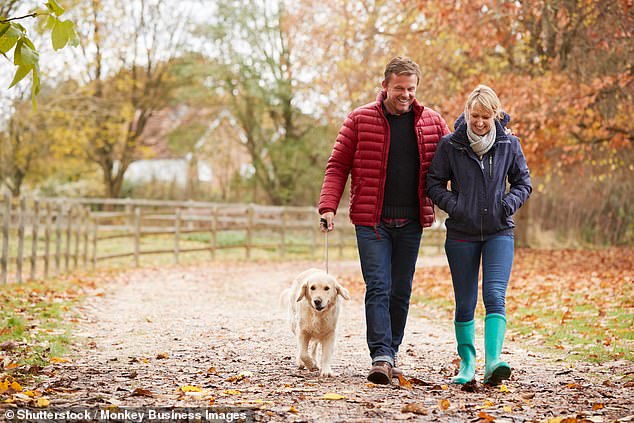 Middle-aged people can reduce their risk of premature death by more than two-thirds by walking just 7,000 steps on a daily basis, a study has concluded (stock image)

‘Easy ways to move more daily include walking to work if possible, or taking part of an online exercise programme if you’re working from home,’ exercise and health physiology expert Lindsay Bottoms recommended.

‘Meeting with friends for a walk — rather than in a café or pub — can also be useful,’ she added.

‘Even small amounts of physical activity positively impact your health.’

Given this, she continued, ‘taking regular breaks to move around if you’re working at a desk all day will help to easily get more physical activity.’

‘Participants taking at least 7,000 steps a day, compared with those taking fewer, had a 50 to 70 percent lower risk of mortality.’

‘Taking more than 10,000 steps a day was not associated with further reduction in mortality risk,’ she added.

This conclusion mirrors the findings of several previous studies that have suggested that lower goals may be just as effective for maintaining one’s health.

A review published earlier this year into the benefits of various levels of physical activity by an expert from the University of Hertfordshire found that walking just 4,400 steps a day may be enough to protect against serious illnesses.

Meanwhile, two recent studies from the US found that walking just 4,000 steps a day could reduce your risk of mortality by around 30 per cent.

‘Steps estimated from these devices could be a simple metric to track and promote physical activity.

‘Encouraging walking to achieve step goals is a well-tolerated form of activity for most people.

‘Guidelines for physical activity do not include step counts as a public health target, owing to the limited number of studies demonstrating the prospective associations of step volume and intensity with clinical outcomes, including mortality.

‘Most prospective studies on steps and health include samples of older adults, whereas few studies include adults earlier in their life course or racially diverse populations.’

‘The popularity of consumer wearables has increased over the past decade,’ Dr Paluch continued.

‘For example, users of wearable Fitbit activity trackers have increased from approximately a half million people in 2012 to 29.5 million in 2019.

‘It is important to provide evidence-based recommendations for the number and intensity of steps associated with mortality and other health benefits.

‘Improving physical activity levels in the least active segment of the population by encouraging increasing daily steps may be associated with lower mortality risk.’

The full findings of the study were published in the journal JAMA Network Open.

HOW MUCH EXERCISE YOU NEED

To stay healthy, adults aged 19 to 64 should try to be active daily and should do:

A good rule is that 1 minute of vigorous activity provides the same health benefits as 2 minutes of moderate activity.

One way to do your recommended 150 minutes of weekly physical activity is to do 30 minutes on 5 days every week.

All adults should also break up long periods of sitting with light activity.