RUNNING on to the pitch, this football team looks like any other as the players take their places for kick-off.

Yet there is a heartbreaking bond that unites them — they are all dads who have lost children. 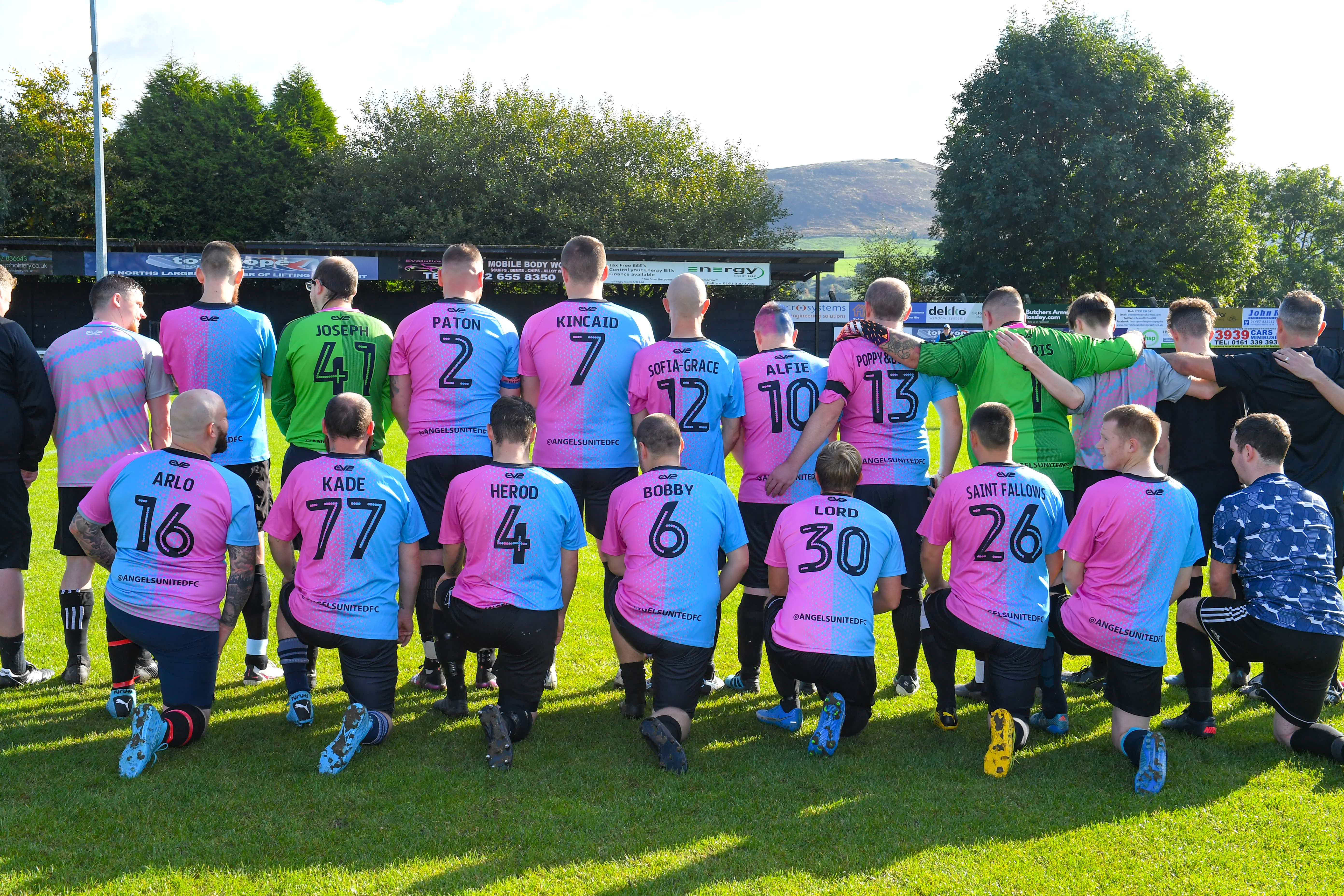 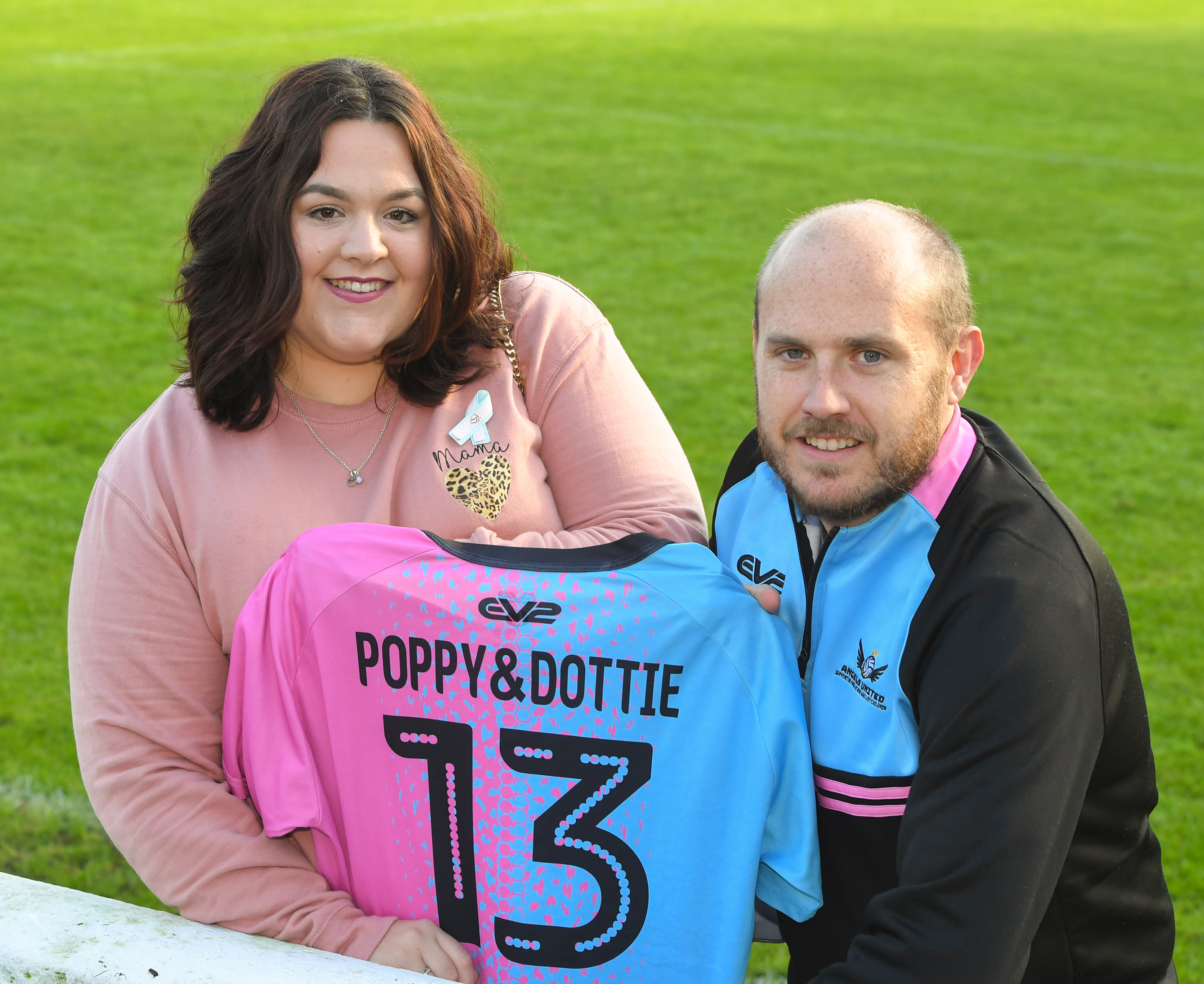 This week marks a year since the club, Angels United FC, was set up by 14 fathers who met through a bereavement group.

The squad support each other, both on and off the pitch, through a shared love of the game and the desire to remember their kids.

Each player also proudly wears the name of his “lost angel” across the back of the team’s eye-catching pink and blue strip.

It was seeing the names emblazoned on the kit that first brought Jake Pugh to a training session this summer.

He and his partner Beth lost their three-year-old daughter Lily-Mai to a rare form of lung cancer in July 2020.

Jake, 30, from Preston, says Lily was “fun, bubbly and lively” and enjoyed singing along to the Disney film Frozen.

He adds: “She was perfect. She was my everything.” After her death he didn’t leave the house for a year, and says: “I hadn’t slept for 12 months.

“I was living with depression and a bit of PTSD because of the distressing time with Lily at the hospital during Covid.

“I used to be a very stone-faced man, never upset by anything, never cried. I’m over that now.

“It was coming up to the anniversary of Lily’s passing and I was thinking, ‘Right, I need to do something because I’m in a rut’. I needed something to ignite that spark and get me out of the house.

“Football has always been a massive part of my life and once I saw the team wore their children’s names, I thought, ‘That’s it, I don’t need to look any further. I want Lily-Mai on my back’.”

For Jake, a data analyst at aerospace firm BAE Systems, the shared empathy and experience of child loss is well worth the weekly hour-plus drive to training with the team, based in Mossley, Greater Manchester.

He says: “You can see that pain and the struggle on someone’s face, even when we’re laughing and joking. The word grief isn’t strong enough for what we’ve been through.

"Everyone’s experienced grief, but this is not the same. I needed a group of people who get it.”

Club co-founder Olly Monk realised what a uniting force football could be after he lost daughters Dottie and Poppy. His partner Katie, 29, had miscarried in 2018, then got pregnant with the twins the following year.

Tragically they were affected by the rare pregnancy condition twin-to-twin transfusion syndrome (TTTS) and were stillborn in 2019.

'YOU CAN SEE THAT PAIN'

“The day after, I ran away to watch my team, Gillingham. They won one-nil, and it was the first time in two weeks I’d managed to crack a smile.”

Olly tweeted about it and the following morning he was inundated with messages.

He adds: “I had random professional footballers from around the country messaging me to see if I was all right.

“It really showed me how you can use something as silly as football as a big tool to help people.”

Olly is a passionate advocate for using the sport to break down boundaries. The team plays a game each month, but as Olly says: “The football is secondary. Everyone’s there half an hour before, to have a chat.

“People find it strange that blokes are talking about this because historically men don’t talk, but that’s what we’re trying to do — trying to break the stigma. A big thing in the baby and childless community is about saying names and breaking the silence.

“I’m more comfortable speaking to a random stranger than I am speaking to my wife about things.”

But being open has not always come naturally to Olly. He adds: “When Katie had the miscarriage in 2018 I didn’t do anything to deal with my grief. I bottled it up, went back to work, buried my head in the sand and broke myself mentally.

“Eventually I found myself crying. So after the girls were born I knew I needed to do something.”

Angels United follows in the footsteps of the charity Sands, the Stillbirth And Neonatal Death Society, which has soccer teams around the country.
Its Stockport squad were Angels United’s opponents in a match for their first birthday last Sunday, marking the occasion with a minute’s silence and by letting off pink and blue flares.

Angels differs from Sands by welcoming parents of children who were lost at any stage of life.

Olly says: “Sands does amazing work but we have people that don’t fit the neonatal bracket, like our manager, Wayne.

“His son Alex caught meningitis and passed away when he was in his late teens. There’s no set of circumstances that we don’t look at.”

Over the past year the team has grown to about 30 players, and has a Facebook bereavement support page.

Yesterday marked two years since Poppy and Dottie’s birth — and the prospect of an anniversary can be very tough. But Olly says the supportive network that has emerged through the team is a great comfort.

He adds: “We have a WhatsApp group that’s always got people talking in it. It’s nice to know that I’ve got 29 numbers on my phone if I am struggling. I can just drop someone a text or have a proper chat or go for a walk.”

For Jimmy Riley, his team-mates are more like family. The 41-year-old defender plays in memory of Alfie, his son with his 40-year-old partner Lisa. Alfie died after he was born at just 28 weeks in January 2017.

Jimmy says: “As soon as you’re in, you’ve got this new family. I live in Oldham but I grew up on Anglesey, so I’m 100 miles away from anyone.

“It means so much to have these guys locally. I can go to football training and if I’m not in the mood to play, I can sit on the sideline and somebody will come over, give me that hug and say, ‘Come on, let’s just go for a walk’, or whatever I need at the time.

“And it creates a legacy for our angels. Ninety minutes on the field is my time with my little boy Alfie, so I do it to represent him.”

Jimmy recalls spending time with Alfie in a “cold cot” at the hospital, “talking about who he might have grown into” before holding a funeral.

He adds: “He got a little blue coffin but on the day, what they don’t prepare you for, is carrying it all the way. It was handed to me and I had to sit in the car, driving for miles. It was hard.”

He adds: “My body started to shut down. Half my body went numb and on the left side of my face, my left arm, I was getting electric shocks.

“I ended up with carpal tunnel syndrome because all my muscles were in spasm. I needed injections to release the muscles and medication for two years.”

Jimmy, who works for the Ministry of Defence, says he is now happy to “break down” in front of people, rather than keep things bottled up.

He adds: “I’m quite an emotional person so every time I talk about Alfie, I end up crying. I’m not afraid to let it out.”

Jimmy and Lisa — who also have daughter Alex, 15 — went on to have Charlotte, three, and Harrison, 20 months.

Talking about their lost children and keeping their memories alive is very important to the team.

Jimmy says: “I don’t care whether we win ten-nil or lose ten-nil, I’ll still walk off smiling because I like that time to represent my boy.

“I spend my journey to the game just remembering Alfie and talking to him. It’s nice to know that his name won’t be forgotten.”

Olly adds: “Our children will never get to play football, so when we play, we play for them.”

The team has achieved so much in its first year and now they plan to start coffee mornings for partners and families and fund a counsellor for the players.

The tragic reason for the team’s existence means the players call it “the club no one wants to be a part of”. But further down the line they want to expand Angels United with more sports teams — not just football — around the country.

Jake says: “Unfortunately, the family is going to keep growing. I hate that it does, I hate that more people are having to reach out.

“But I’m so proud of every single one of us because it is so hard to ask for help. I know that it’s so easy just to lock yourself away, and every one of those lads understands that. I love them like my own brothers.

“It’s trying to put a positive light on a dark time — and I want to be there for every new person who joins us.” 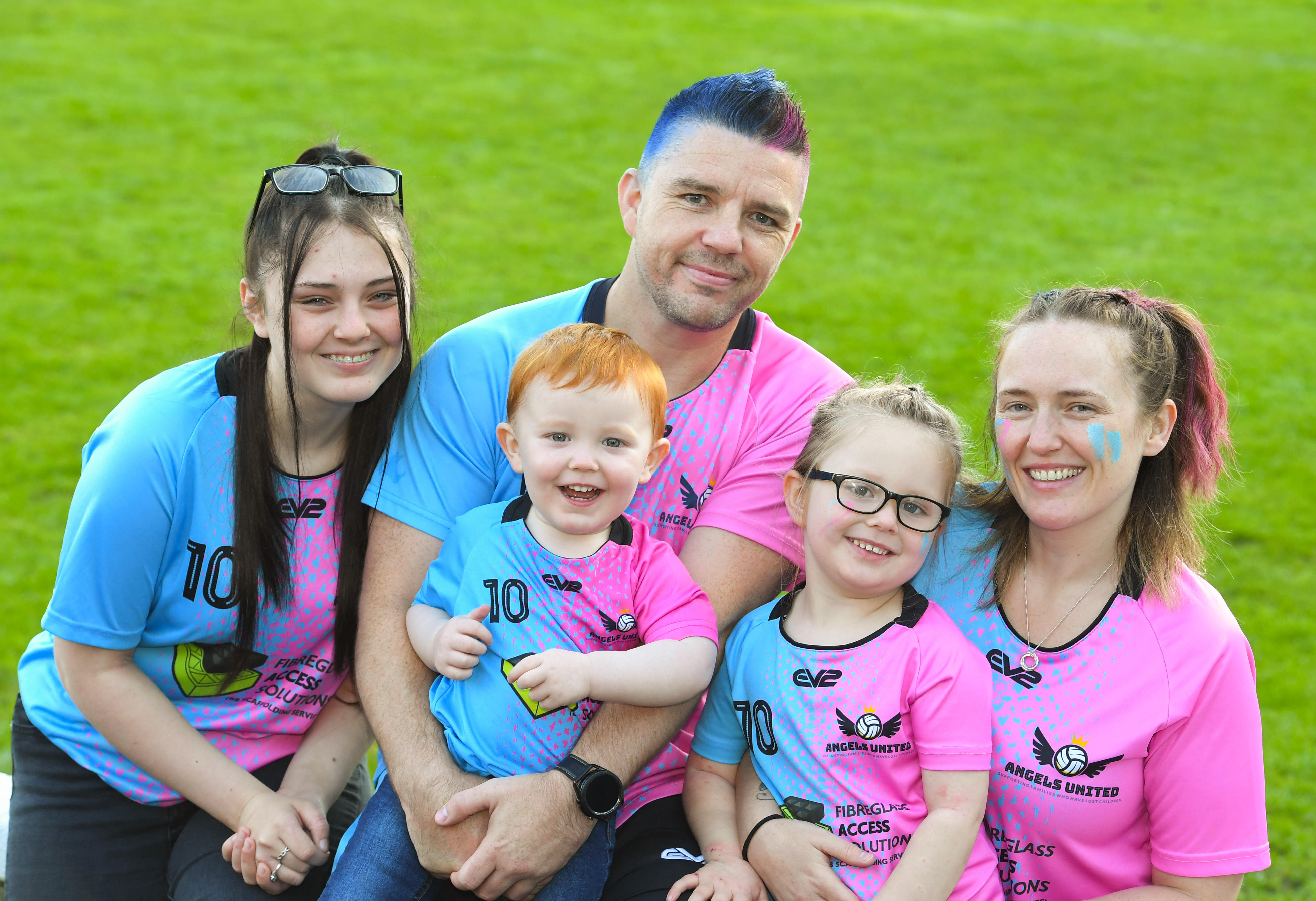 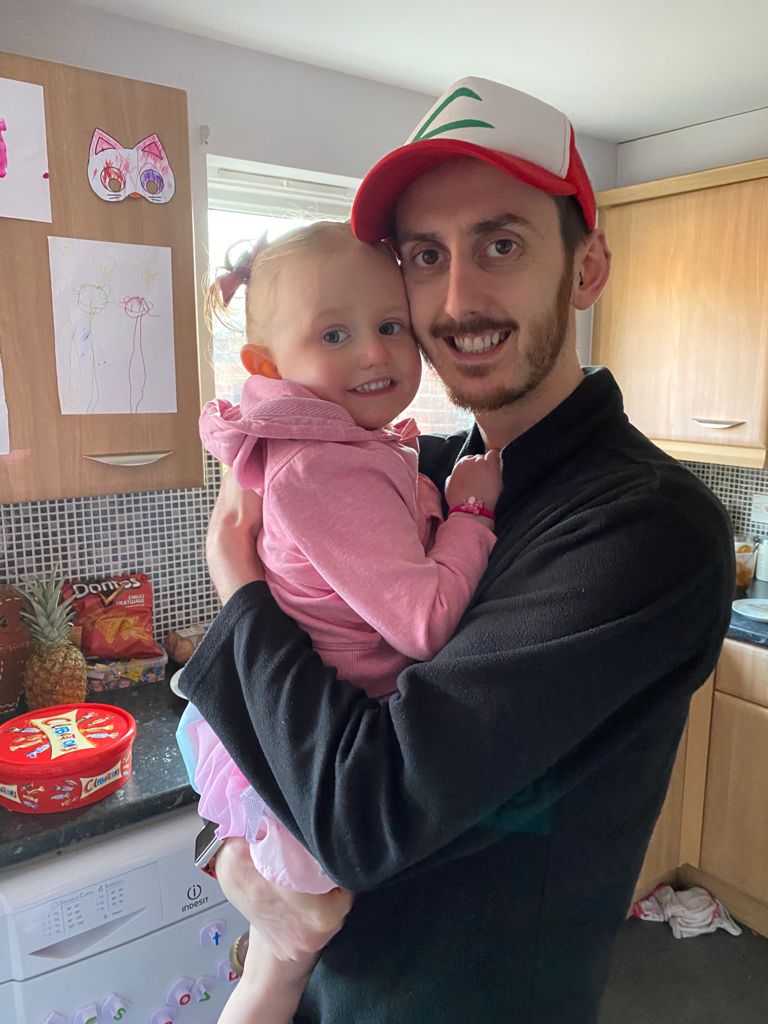 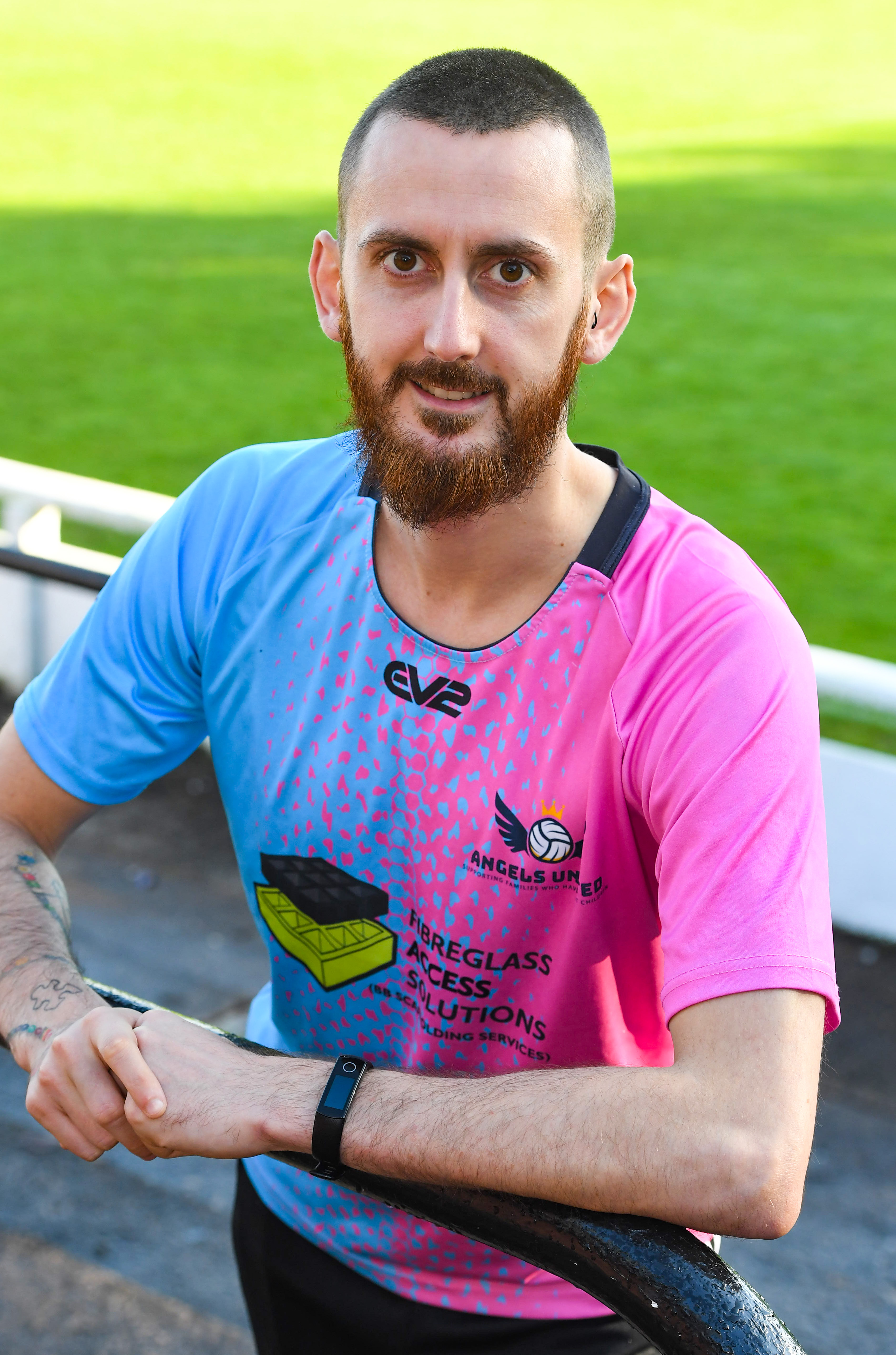 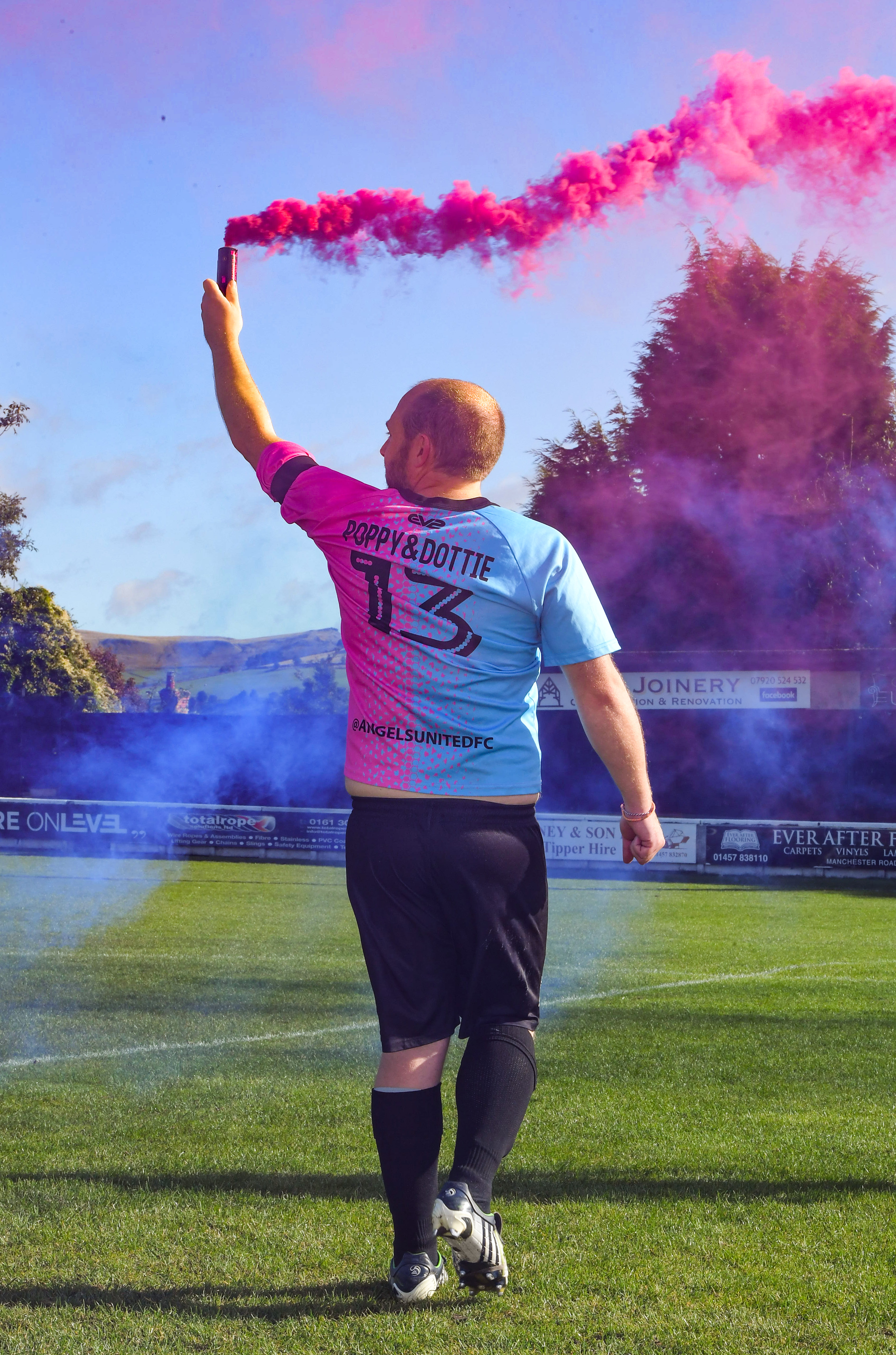