John McCallister, a 63 year old nurse, has been a renter all his life. He’s loved the flexibility of renting – “it’s given me an ability to move around, live in different cultures” – but with retirement looming, he’s worried. “Twice in my renting I’ve been displaced and evicted at short notice. At short notice, you’re suddenly looking for somewhere else to live. There’s anxiety around that … and expense,” he says.

On 1 September, that anxiety will ease. McCallister will move into a home where he can hammer nails where he wants, paint the walls, adopt a pet and be free from the spectre of a quick eviction. But McCallister will not own the one bedroom apartment. He is one of the first five tenants to sign a lease at Liv Indigo, a build-to-rent apartment complex in Sydney’s Olympic Park, owned and managed by property development titan Mirvac.

Although they are common in the US and parts of Europe (where renters also enjoy far more legal protections), and growing in prominence in the UK, Liv Indigo is one of just a tiny handful of built-to-rent properties in Australia, and the first of its kind in New South Wales. 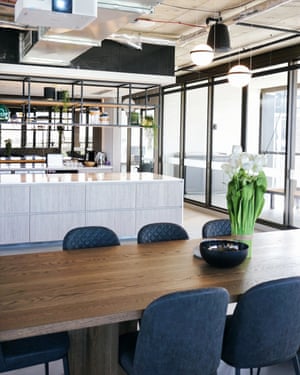 Currently, Australia has a “rental model which is almost entirely dominated by mum and dad investors,” explains Prof Hal Pawson, an urban policy and strategy researcher at the University of New South Wales’ City Futures Research Centre. While it might work for the investors, who are able to accumulate wealth as their properties rise in value, this way of doing business does not always work out for the people who live in the “asset”. “The business philosophy is to do with the property, not to do with a tenant,” says Pawson. “It’s not consumer-focused.”

McCallister has been on the receiving end of that service model before, wanting to be a “good tenant”, he has “always been reticent about making too much of a fuss”. When there have been problems with units he has lived in previously, he explains “I try to put up with stuff … In case I become one of the renters that’s always needed something done.”

With built-to-rent housing – where an investment group own and run a large property (or properties) populated only by renters – money comes not from the appreciation of the building as an asset, but from a steady stream of rent from residents. “If your main business is about … the income stream, then inherently it’s pushing you as a company towards thinking about how can you generate the most rent by offering the most attractive product,” Pawson says.

“We say we’re ‘the anti-real estate agent’ at the moment, because you’re not dealing with someone who has multiple priorities. Our number one priority is this building,” says Mirvac’s Head of Operations, Built to Rent, Andrew Hansen. 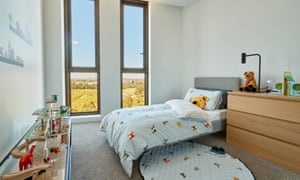 He explains that the Liv Indigo project comes without “that sugar hit” that typically drives construction. But, “we’re holding onto this for 50 years, so we see the capital investment as being – ‘we want happy renters, we want people to stay as long as possible’”. From a construction point of view, this has meant spending more on high quality fixtures like floor tiles. The building was constructed in partnership with the Clean Energy Finance Corporation and includes elements that improve energy efficiency like double glazing, energy usage signposting and LED lighting.

While units are offered on 12 month leases, in line with typical Australian rental properties, the leases are rolling and tenants will have first right of refusal on renewal. They will also be encouraged to move within the building if their housing needs change. Rental price increases will be capped at 4% per year – although Hansen is quick to stress that this does not mean the rents will increase annually.

On the top floor of Liv Indigo, there’s an expansive lounge space, filled with greenery, trendy furniture, a commercial kitchen and, from the wraparound windows, a sweeping view of Sydney’s skyline. It looks like a brand new business class lounge at an airport. Along with a gym, a media room, hot-desking and conference facilities, this lounge space is one of many perks built into the complex, that will be freely available for renters to use. 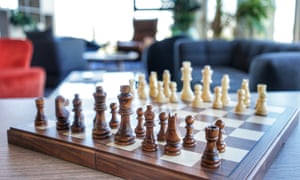 The building will also have on-site maintenance, concierge services, a social club and brand new, energy efficient appliances that will be replaced for residents every five years (or sooner, if they break down). Renters will also be given the freedom to customise their units with paint and nail-in fixtures. Pets – sometimes verboten in rental properties, though laws differ state-to-state – will also be welcome.

All these perks do come at a price – living in a Liv property is more expensive than the rest of the rental stock in the neighbourhood. A one bedroom apartment starts at $535 per week, two bedrooms start from $615 while three bedroom units cost $900 – according to data from Realestate.com.au, the median property prices are $470, $580 and $775 respectively. “We model it, because we have nothing else to model it on, at about a 5-10% premium,” Hansen says.

This means that, while built-to-rent developments are nice for those that can afford to live in one, “on its own [built-to-rent] doesn’t fulfil the affordable housing shortage at all,” Pawson says. Pawson asserts that the lack of good quality, affordable housing is the biggest way in which Australia’s housing system is broken, and while built-to-rent “could possibly be a very useful disruptor”, without significant policy changes, these developments are unlikely to fill that gap.

At the moment, Mirvac has between 1,700 to 1,900 built-to-rent units in their pipeline – mostly in Melbourne, including a 490 unit development in the Queen Victoria Market precinct, set to open in mid-to-late 2022.

There are other players in the market too, including the former Commonwealth Games Athletes Village on the Gold Coast, and the Subiaco building in Perth, owned by large US-based real estate company Sentinel.

However, the initial investment in creating a built-to-rent property is huge. Speaking on 7 July, Hansen described the taxation treatment for these developments as “extremely unfair”; however on 29 July, the NSW government announced a 50% discount on land taxes for built to rent properties.

If lowering this tax barrier creates increased competition, that will be a boon for renters, says Pawson. “If there’s a professional build-to-rent model in the market which is showing how could be done in a consumer-focused way,” he says it could have “spillover benefits to a much larger number people, who are still renting from mum and dad investors” because “the real estate agents that are usually managing properties on behalf of mum and dad investors have to aspire to do a better job”. But Pawson says, this still only applies to those that can afford it – “the idea is offering much better product for slightly higher cost”.

Hansen is tentatively optimistic about the long term prospects of the experiment. “A lot of money has been put into this business, and hopefully one day we’ll get a return, but it won’t be fast.”

For McCallister, the return will be faster. “I think there needs to be more of what’s happening. I think it’s remarkable,” he says. “When you’re a renter you never feel like a place is your home. For me, being part of this project, it’ll feel like a home. It’ll feel like my home.”