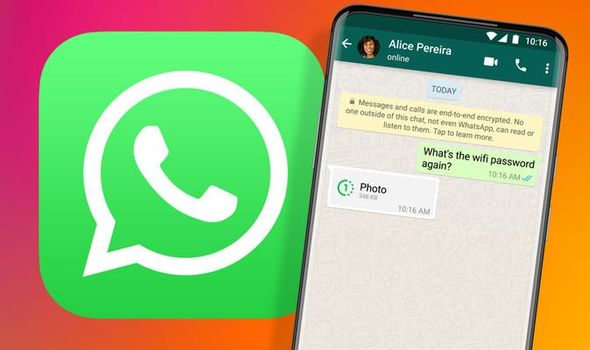 WhatsApp has launched its hotly-anticipated “View Once” feature, which lets you send photos or video that immediately vanish after they’ve been opened by the intended recipient. Like Snapchat, which pioneered this type of popular ephemeral messaging, photographs and videos will disappear as soon as they’ve been opened.

You will be able to tell that you’ve been sent a self-destructing message before you open it, so there’s plenty of time to prepare yourself and make sure you’re paying attention to what’s happening on-screen. WhatsApp believes users will leverage the new feature to send temporary information, like Wi-Fi passwords. However, it’s also a handy new addition for those who don’t want friends and family keeping every single holiday photo, shot of a new outfit, meme, or GIF you’ve ever sent them.

WhatsApp will not save the photos and videos to the storage on your handset, even if that’s what usually happens when you’re sent one of these messages.

However, a prominent security expert have flagged a potential problem with the system that’s cause for concern. Aaron Drapkin, Digital Privacy Expert at ProPrivacy, told Express.co.uk, “WhatsApp’s new ‘View once’ feature is a well-intentioned idea clearly designed to decrease the level of permanency attached to images you send to your contacts and, in turn, grant you more privacy and control over your sent items. Unfortunately, it has been poorly executed.

“As is the case with most social media apps that try to innovate these sorts of changes, very few of them account for the iconic screenshot function on an iPhone. Some apps, such as Snapchat, notify you if a screenshot of something you’ve sent has been taken, but with the View Once feature on WhatsApp, you won’t know if your image has been screenshotted.

“The technology is there – it’s not possible, for instance, to screenshot a frame of a show on the Netflix app – and we can only hope this is implemented ASAP otherwise the supposedly privacy-first app is lulling users into a false sense of security.”

To send one of these messages, you’ll need to load up a picture or photo as usual. However, in the lower right-hand corner, next to the send button, there is a “1” button. Tapping that will enable the feature, ensuring that your picture won’t hang around once it’s been viewed.

However, WhatsApp has warned users there’s nothing built into the feature to prevent the recipient from taking a screenshot.

The arrival of “View Once” is not entirely unexpected. Back in June, Facebook CEO Mark Zuckerberg confirmed that the feature would be incoming, though details on how it would work were thin on the ground. According to WaBetaInfo, which trawls through the code of beta versions of WhatsApp to uncover new features and unfinished updates, claims “View Once” was tested for around a month before it was launched worldwide.

To get access to the latest feature, head to the App Store and Play Store to download the latest version of WhatsApp.