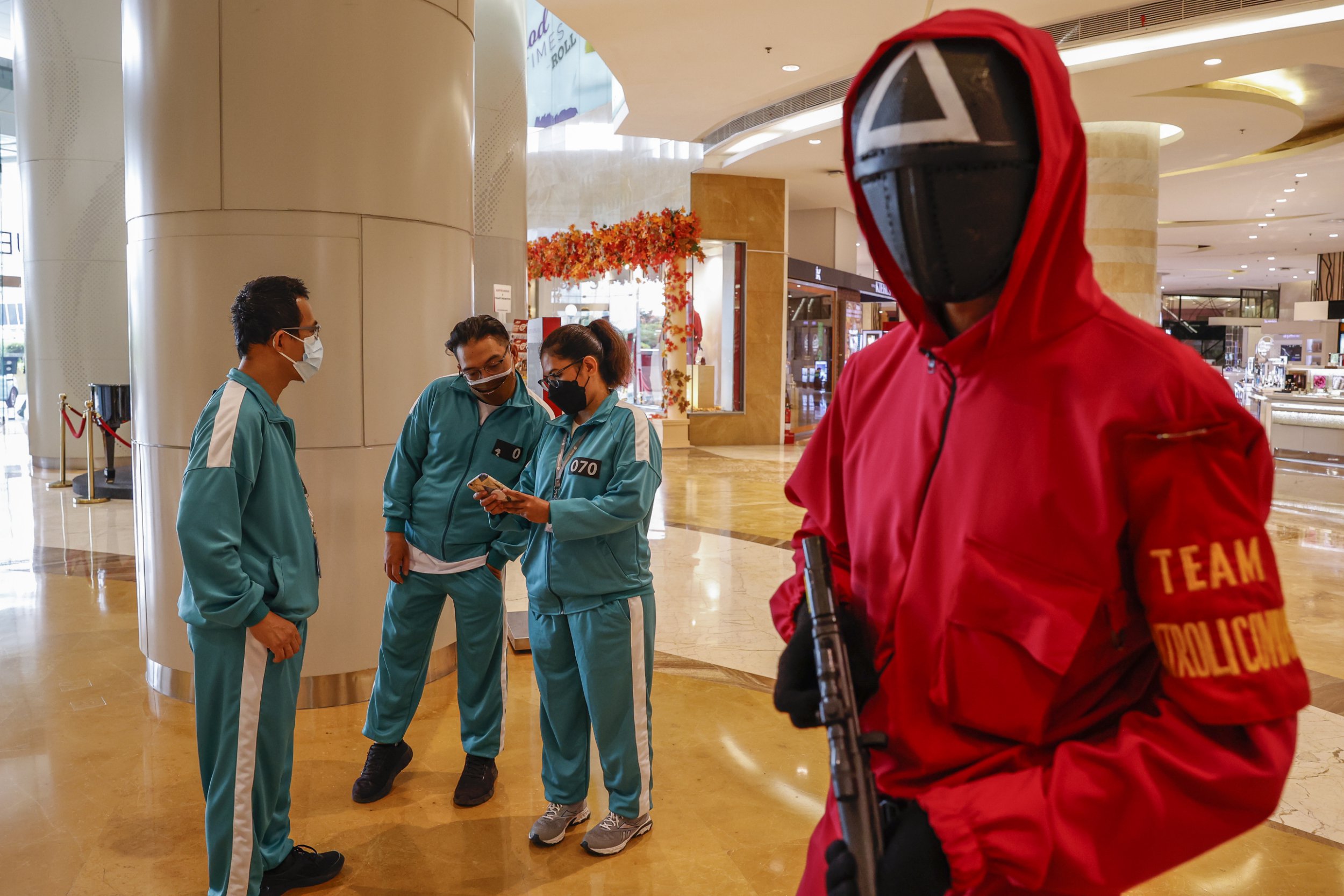 Imagine being out for a day of shopping when a security guard wearing pink coveralls, a black mask covering their entire face and holding a toy gun approaches you.

This is what happened to Indonesian customers visiting Jakarta’s Lotte Shopping Avenue.

The mall’s security staff wore costumes from the hit Netflix series, monitoring the halls and escorting store employees who were dressed in the green tracksuit uniforms of Squid Game’s participants.

Some customers took it as a chance to immerse themselves in the world of their favourite new show and took pictures with the guards terrorising them and pointing guns at them.

Other customers did not seem to care about the guards’ new attire, which the shopping mall adopted for their Halloween celebrations.

The security employees however did not let the fun take the best of their duties and returned to their station where other colleagues were dressed normally to welcome guests.

The Squid Game craze has taken over the Indonesian capital in recent days as a café in the city also had their employees wear Squid Game guard uniforms as they welcomed guests.

While there are no prizes for winners, patrons of the café can enjoy a less stressful game with their drinks, trying to get the ‘dalgona’ biscuits out of their shapes.

The café started this immersive experience earlier this month and in the first week, it managed to triple its earnings with more than 200 customers a day.

‘Before this, when there was a PPKM (Enforcement of Community Activity Restrictions), our income fell sharply,’ said café owner Putra Priyadi.

‘However, after the PPKM rules were relaxed, our sales began to recover and increase slightly. But after we started the Squid Game event, our sales rose significantly right away.’

Squid Game has officially become Netflix’s biggest debut ever, with over 111 million viewers tuning in to watch the show in the 28 days since it was released.

This means that the drama has beaten the viewership of Bridgerton, which was released at the end of 2020 and commanded 82m views.

It is the first Korean programme on the streaming platform to become the most popular series in the US and follows from the company’s efforts to increase its offering of international shows.

Speaking of the success, Minyoung Kim, Netflix’s vice president of content for Korea, South East Asia, Australia and New Zealand, told CNN: ‘When we first started investing in Korean series and films in 2015, we knew we wanted to make world-class stories for the core K-content fans across Asia and the world.

‘Today, Squid Game has broken through beyond our wildest dreams.’

And we might have even more drama on our hands after director Hwang Dong-hyuk shared the ideas he has for season two.

‘If I do get to do one — one would be the story of the Frontman [a former cop who now oversees the game],’ he told the Times.

Squid Game is available to stream on Netflix.