Anything can happen on live television and This Morning proved exactly that on Monday’s episode.

The ITV daytime show was plunged into chaos as Jenny Kell and her young sons Tom and Finn appeared in full costume to talk about their weekends living a viking lifestyle.

The family regular get together with other people to dress up as vikings at reenactment events, which includes eating traditional food, acting out battles and more.

However, Tom didn’t seem keen on the chat and instead just started shouting ‘boo’ over and over again as presenters Andi Peters and Rochelle Humes tried to regain some control.

Andi joked: ‘I’m laughing because all my life, I’d love to be like Tom on telly. I want to sit there going, “Boo! Boo!” Literally, that would be my – I’ve never been allowed to do that, but Tom is living it!’

‘I feel like I’m at home, so I’m actually having a conversation with Jenny over the boo,’ Rochelle quipped before Tom literally started screaming. ‘I now don’t know what to do, I’m going to be honest!’ 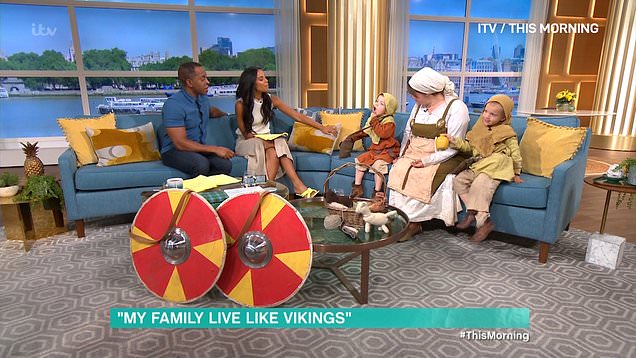 They desperately tried to ask him a question, which ended up being about the battles – and Tom was very clear about his favourite part.

Referring to the aftermath when the kids get to run onto the battlefield and join in the action, he simply shouted: ‘Kill the winner!’

As the interview came to an end, Rochelle – who has kids Alaia-Mai, nine, Valentine Raine, five and Blake Hamptom, 22 months, with husband Marvin Humes – joked that she usually goes to work to get some respite from that kind of chaos.

It seems some viewers also struggled with the segment, with one describing the situation as a ‘nightmare’ and another laughing as they said the interview was ‘trashed’.

‘Kids had too much sugar this morning,’ quipped a different Twitter user, while a fourth person added: ‘Please shut those kids up or I’m turning off’.

And yet another tweeted: ‘Thank you @thismorning for reminding me why I’m glad my kids are grown up. The noise that kid was making for the past five minutes is now a distant memory…’

This Morning airs weekdays at 10am on ITV.