A few lucky residents walking along a beach in Mexico were treated to a special light show when the shore lit up with bioluminescent plankton Monday night for the first time in 60 years.

Photos and videos of the phenomenon showed the shoreline shining in blue as the waves crashed on the sand in Acapulco.

The rare occurrence was the byproduct of a ‘biochemical reaction’ caused by the microorganisms in the water off Puerto Marqués beach, according to Acapulco’s tourism board. 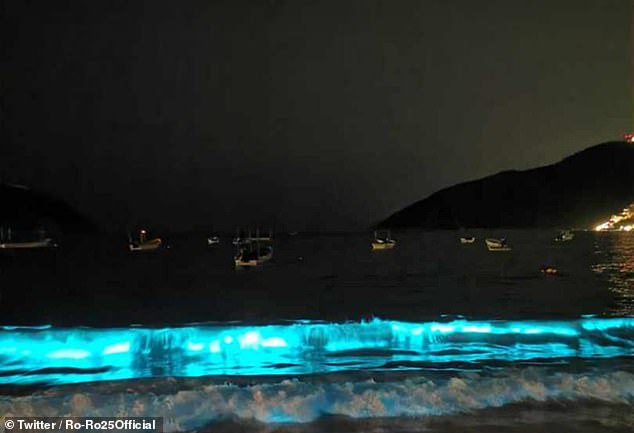 Visitors at the beach in Puerto Marqués, Acapulco, were treated to a rare occurrence Monday when for the first time in 60 years the shore was lit up with bioluminescent plankton as the waves washed up along the sand 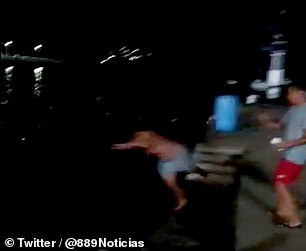 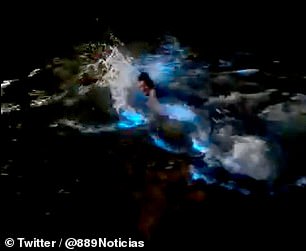 A visitor at a beach in Puerto Marqués, Acapulco, goes out for a swim as bioluminescent plankton brightened the water Monday night. The phenomenon was captured in Acapulco’s beaches for the first time in 60 years

Marine biologist Enrique Ayala Duval dismissed the idea that spread quickly through social media that the extraordinary episode was due to the recent lack of human activity in the beach.

‘Bioluminescence is the light produced as a result of a biochemical reaction in which most of the time luciferin [protein], molecular oxygen and ATP [adenosine triphosphate] take part, which react by means of the enzyme luciferase in the following way: oxygen oxidizes luciferin, luciferase accelerates the reaction, and ATP provides the energy for the reaction, producing noticeable water and light at night,’ Ayala Duval wrote on Sabersinfin.com.

‘There is a hypothesis that the bioluminescence that exists today is the result of evolution,’ Ayala Duval continued. ‘Initially, when the Earth’s atmosphere had an almost zero concentration of oxygen and oxygen was gradually increasing due to the increasing presence of photosynthetic organisms, organisms were released from oxygen, which was then toxic to them with the bioluminescence reaction producing water.’ 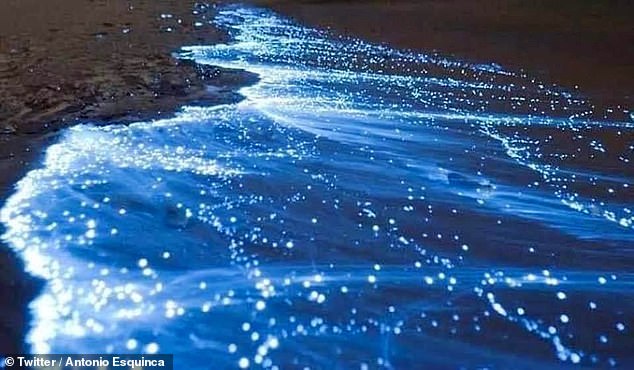 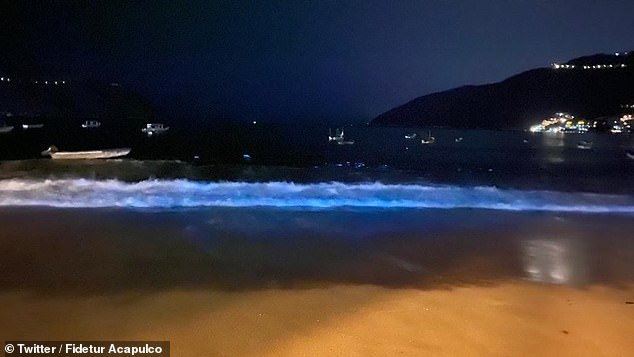 Waves on a beach in Acapulco are lit up in neon blue, the byproduct of a ‘biochemical reaction’ caused by the microorganisms in the water

While visitors have been banned from bathing in beaches across Mexico due to a nationwide quarantine to prevent the spread of the ravaging coronavirus, one beachgoer couldn’t forego the chance of a lifetime and jumped into the neon blue Pacific coast waters.

His decision to do so didn’t sit too well with a host of social media users.

‘What do you think? Yes, the human being again? Do we not understand?,’ one person tweeted. ‘The phytoplankton natural spectacle in Puerto Marqués #Acapulco is impressive, it is an effect created by microorganisms from the sea. What is bad is that the human being will always be there to ruin everything.’ 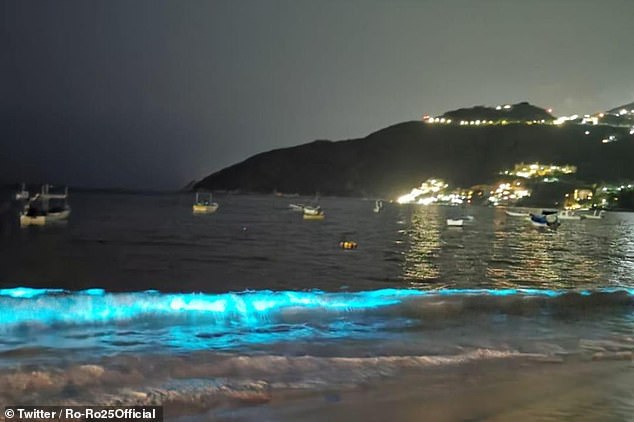 It took 60 years for the beach water at Puerto Marqués, Acapulco, to be illuminated with bioluminescent plankton 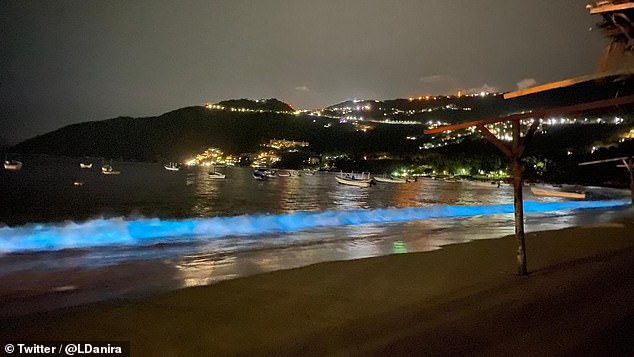 Arturo Martínez took to his Facebook account to blame motorists for the bioluminescent plankton’s six-decade absence in Acapulco after recalling an old conversation.

‘My friend Domitilo Soto once told me that these microorganisms on the beach … were not visible this way because tourists on ATVs ran over them. I think it is a good time to see this beautiful phenomenon in that part of Acapulco in the absence of preferred people on a dark moonless night.’

While it took 60 years for Acapulco’s beach to be illuminated, the viral spectacle is regularly seen in other parts of Mexico.

From May to September, the  water along the shore of the romantic island of Holbox, in Quintana Roo, is lit in blue as is the case with the five lakes in Chacahua National Park in Chacahua, Oaxaca, between August and March.