The Victorian government will continue its pause on administering the AstraZeneca vaccine to people aged under 50.

The Andrews government cancelled appointments for under 50s on Friday following Commonwealth advice that the risks associated with AstraZeneca jabs may outweigh the benefits. 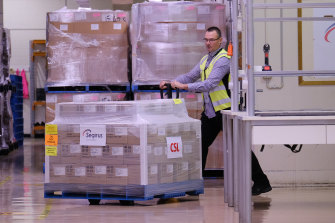 The AstraZeneca vaccine is being made at the CSL factory in Melbourne but Victorians under 50 will not be receiving a jab just yet.Credit:Getty Images

Victorian officials will resume AstraZeneca inoculations for those aged under 50 when the Commonwealth distributes information and consent forms in languages other then English.

Victoria also wants compulsory training for health staff to teach them about the AstraZeneca risks, and wants indemnity for GPs, before restarting vaccinations.

Acting Premier James Merlino said his government still had confidence in the Commonwealth vaccine program but said it required a “reset”.

“The implications … are quite significant and require a recalibration of the Commonwealth’s rollout,” he said.

“Those things all need to happen so people can truly make an informed decision.”

The Victorian government has asked the Morrison government to divert about 80,000 AstraZeneca vaccines that were due to be delivered to state government sites over the next two weeks to GP clinics.

“GPs are calling out for more. This is a common sense approach to get this done as quickly as possible,” Mr Merlino said.

Mr Merlino said there needed to be a “sense of urgency” about speeding up the vaccine program.
He said that, as a person aged under 50, he would roll up his sleep for the vaccine recommended by the federal vaccine advisory committee, which is the Pfizer vaccine.