AIRLINES are being warned to avoid flying through Belarusian airspace after the country was accused of "hijacking" a Ryanair flight and forcing it to land in order to arrest an anti-regime blogger.

Latvia's airBaltic was the first to announce it would no longer fly over the country over safety fears after it was claimed the pilot of a Belarus MiG-29 fighter jet had been given "permission to shoot down the plane". 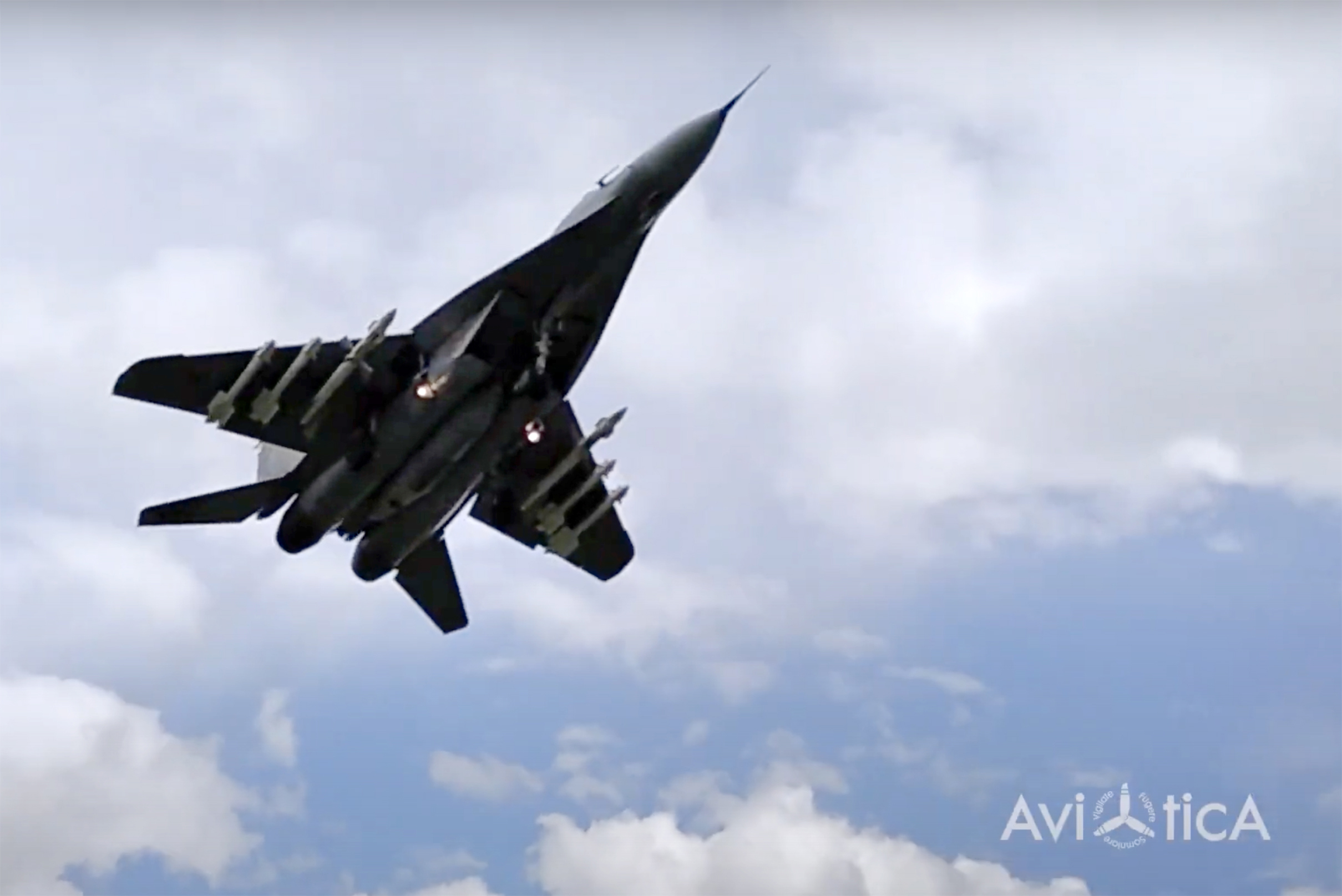 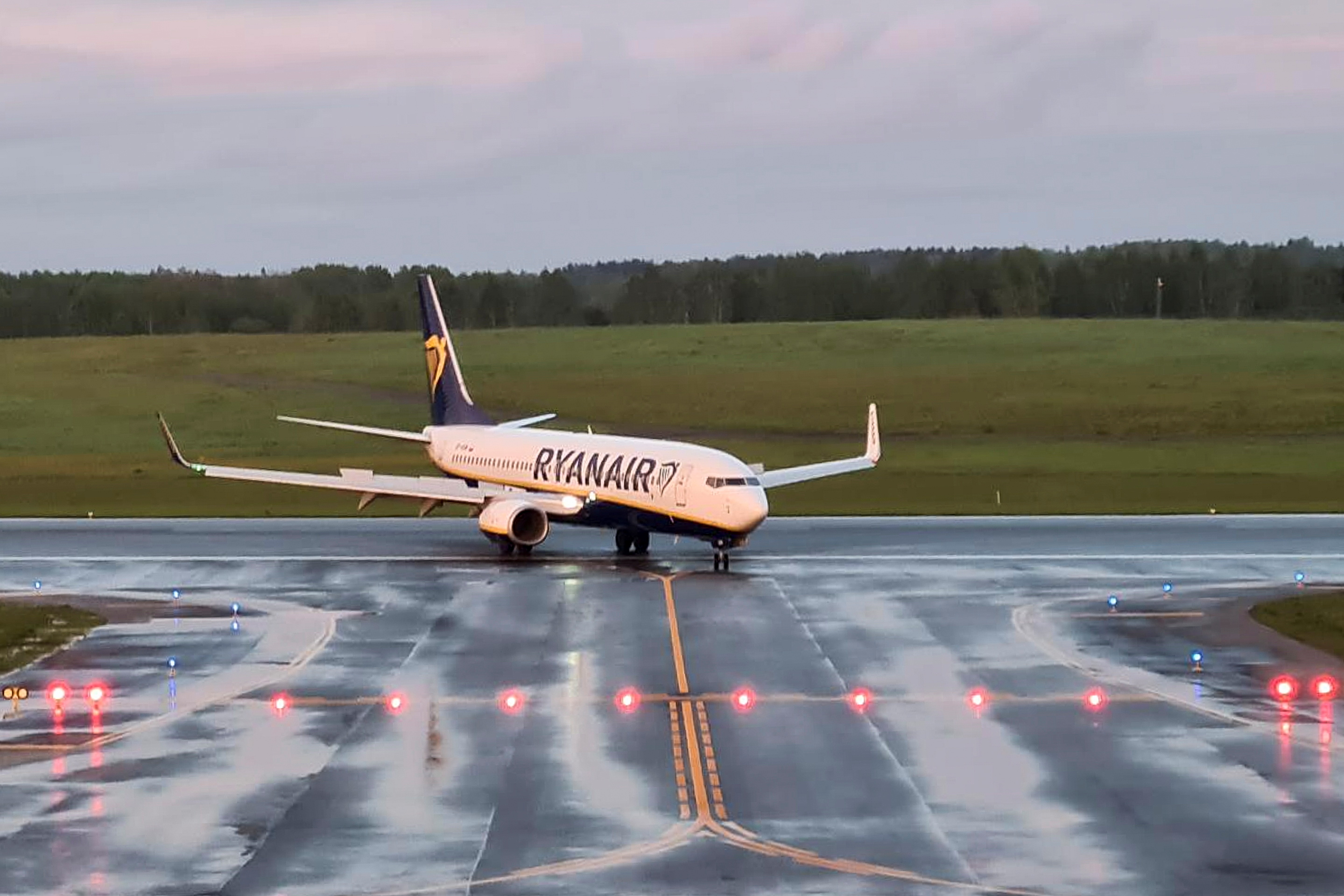 The jet allegedly threatened to blast the Ryanair plane carrying 123 passengers out of the sky as part of a plot to arrest an exiled opposition activist who was on board.

Now, France and its European partners are working on measures to halt overflights of Belarus and bar its national carrier Belavia from EU airports, the French presidency said on Monday.

"We are working on a package of measures that go beyond sanctions against individuals" and may also suspend ground transit links with the EU, President Emmanuel Macron's office said.

Ryanair's boss Michael O'Leary, who referred to the incident as a "state-sponsored hijacking", said he believed security agents had been on the flight and had disembarked in Minsk.

Minsk has shrugged off previous sanctions since last year, which consist mainly of adding various officials to black lists which restrict their right to travel or do business in Europe and the United States. The EU was already working on a fourth round before the Ryanair incident.

Additional steps could now include suspending overflights of EU airlines over Belarus or banning the Belarusian airline Belavia from landing at EU airports.

It comes after the leader of the opposition, Svetlana Tikhanovskaya, widely seen to have won last year’s presidential election against Alexander Lukashenko before being forced into exile, warned "no one can be sure of their safety" following the incident.

"From now on, not a single person flying over Belarus can be sure of their safety," she said.

"After all, the regime is abusing the rules of air traffic in order to capture those who disagree."

Meanwhile, suspicions mount over the role of a group of mystery Russians aboard the aircraft. 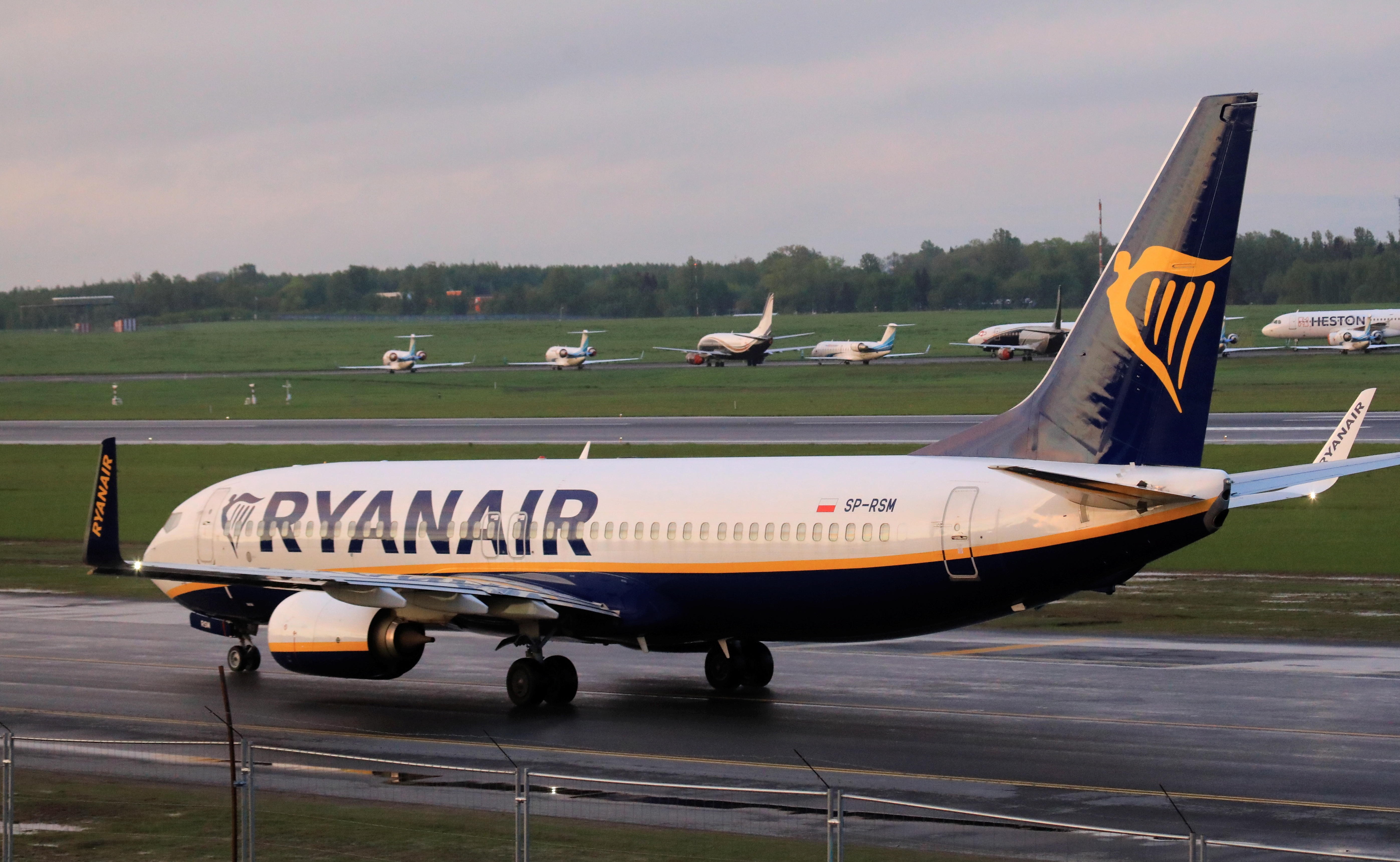 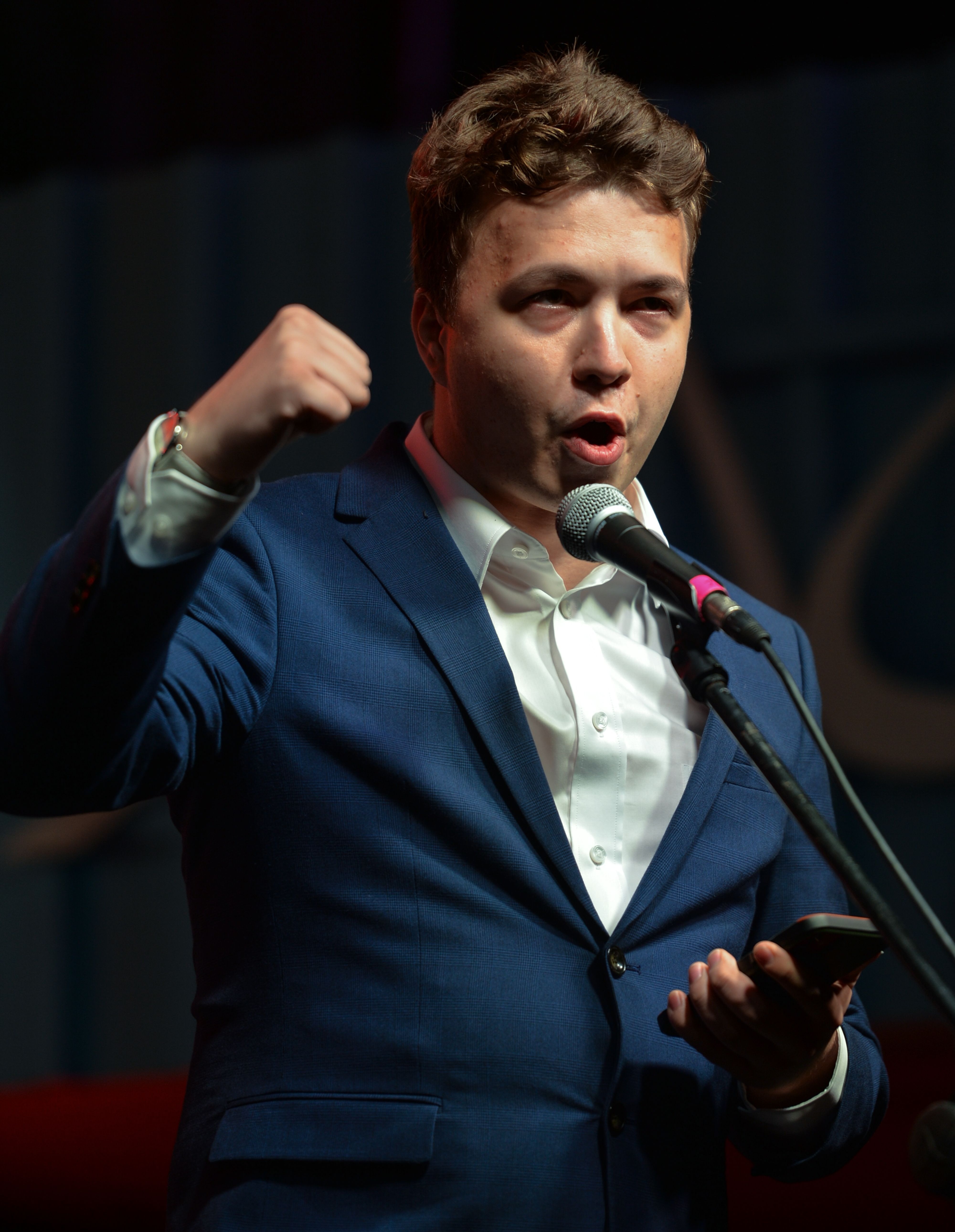 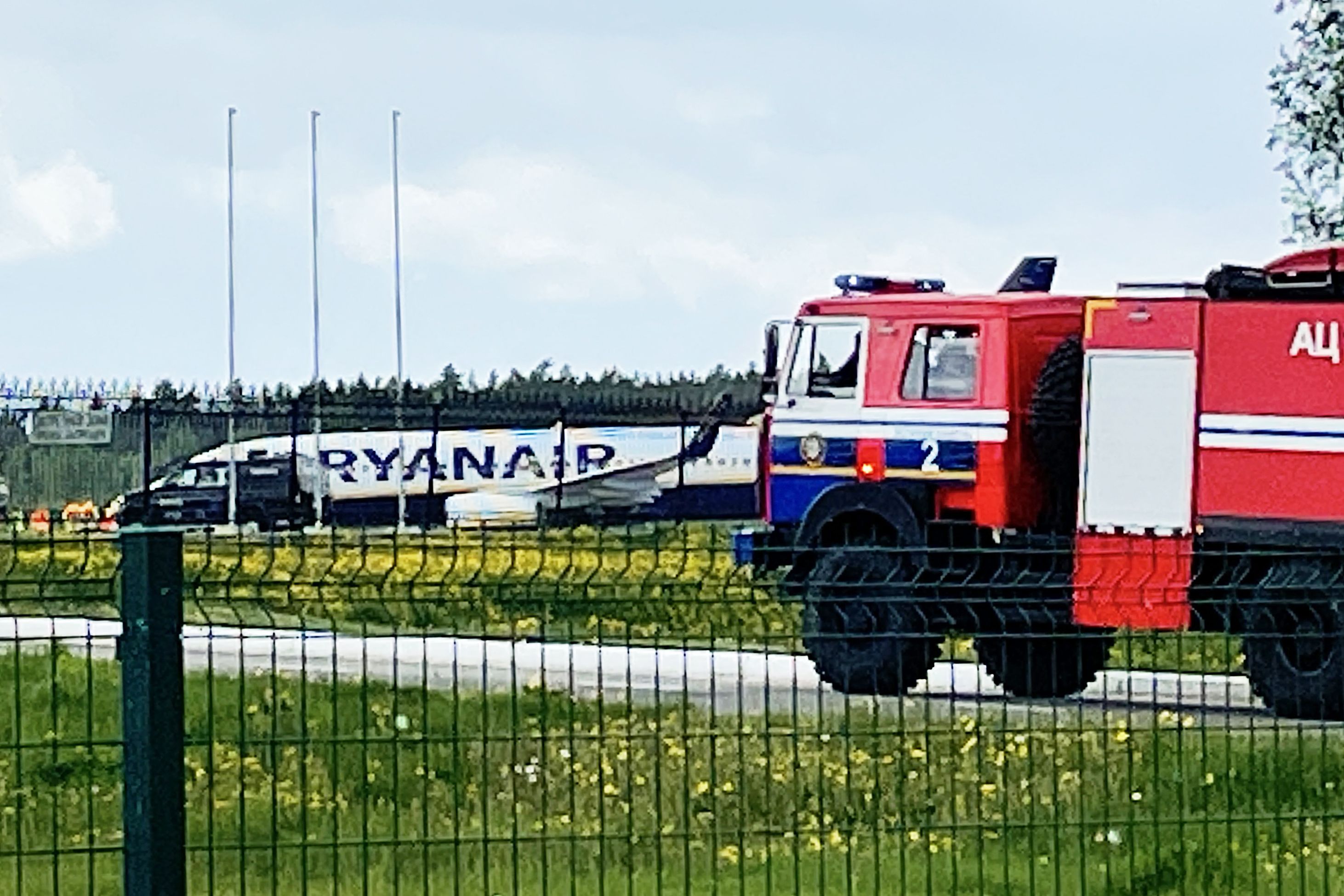 They voluntarily left the plane in Minsk and did not continue with the flight when it flew on to its destination Vilnius.

Their presence stoked fears of Russian secret service involvement in a murky operation to arrest opposition journalist Roman Protasevich, 26, who was detained with his girlfriend Sofia Sapega, 23, after the emergency landing.

Russian president Vladimir Putin backs the Belarusian regime led by his dictator pal Alexander Lukashenko, who is accused of rigging an election in August.

The pretext for forcing the plane to land was a bomb threat, but no explosive was found by the Belarus authorities.

Leading opposition figure Pavel Latushko said: "The air traffic controllers of Minsk-2 airport threatened to shoot at the Ryanair civilian plane with passengers on board.

"For this reason, a military fighter MiG-29 of Belarus Air Force was sent.

"It demands an immediate reaction of European authorities and the entire world community."

Protasevich, a prominent critic of the regime, told fellow passengers he was "facing the death penalty" as he was led away by security forces.

Meanwhile, the country could face further sanctions as European allies discussed how to respond.

Leaders from the European Union will hold emergency talks to discuss the situation, while UK Foreign Secretary Dominic Raab hinted at tougher action.

He said: "The UK condemns yesterday's actions by the Belarusian authorities, who arrested journalist Roman Protasevich on the basis of a ruse, having forced his flight to land in Minsk.

"Mr Lukashenko must be held to account for his outlandish actions.

"The UK calls for the immediate release of Mr Protasevich and other political prisoners held in Belarus.

"The UK is working with our allies on a coordinated response, including further sanctions."

The UK condemns yesterday's actions by the Belarusian authorities, who arrested journalist Roman Protasevich on the basis of a ruse

The flight is said to have been closer to Vilnius than to Minsk when it was diverted, according to a BBC report.

An official Belarus Telegram channel claimed they saved Europe from a terrorist incident, in bringing down the Ryanair plane bound for the Lithuanian capital Vilnius.

A MIG-29 jet escorted the Ryanair Boeing-737-8AS flight to Minsk.

There were 123 passengers on board the passenger aircraft forced down in Minsk.

It was air traffic control in Minsk that informed the pilot about the alleged bomb threat, it was reported.

Belarus Investigative Committee said it had opened a criminal case into a false report about a bomb on board the Ryanair plane.

But before he was dragged away, Protasevich reportedly told other passengers "the death penalty awaits me here". 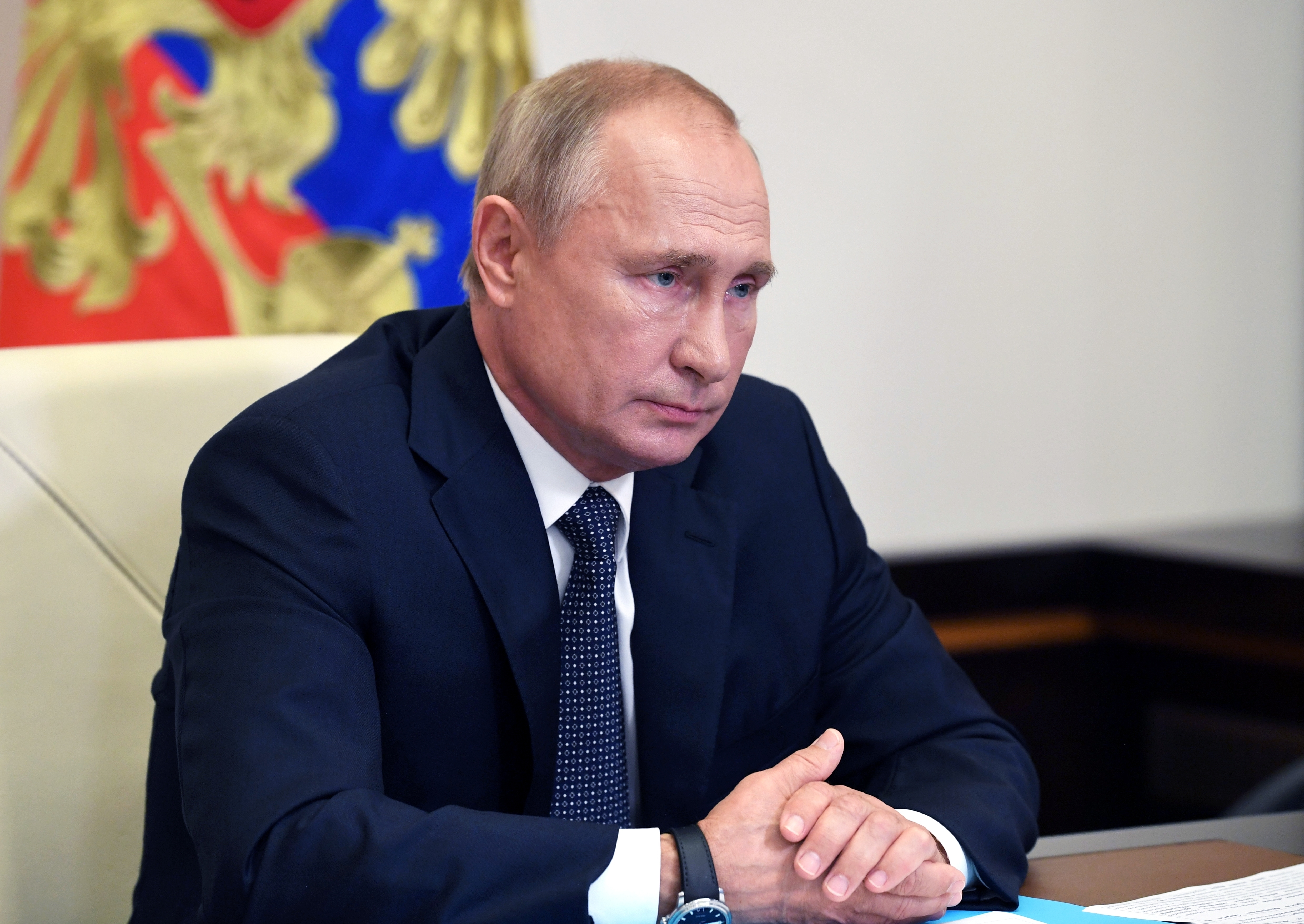 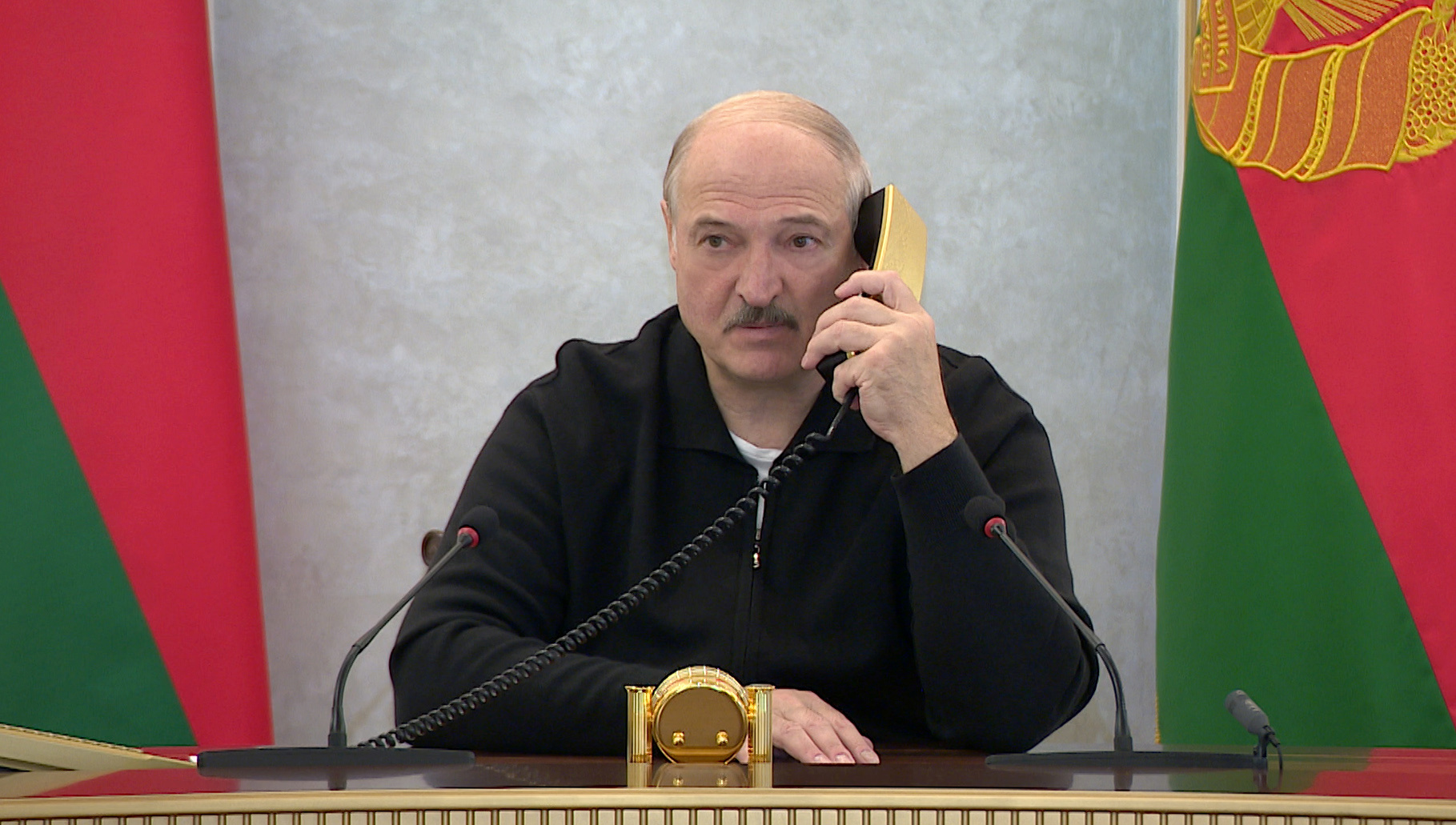 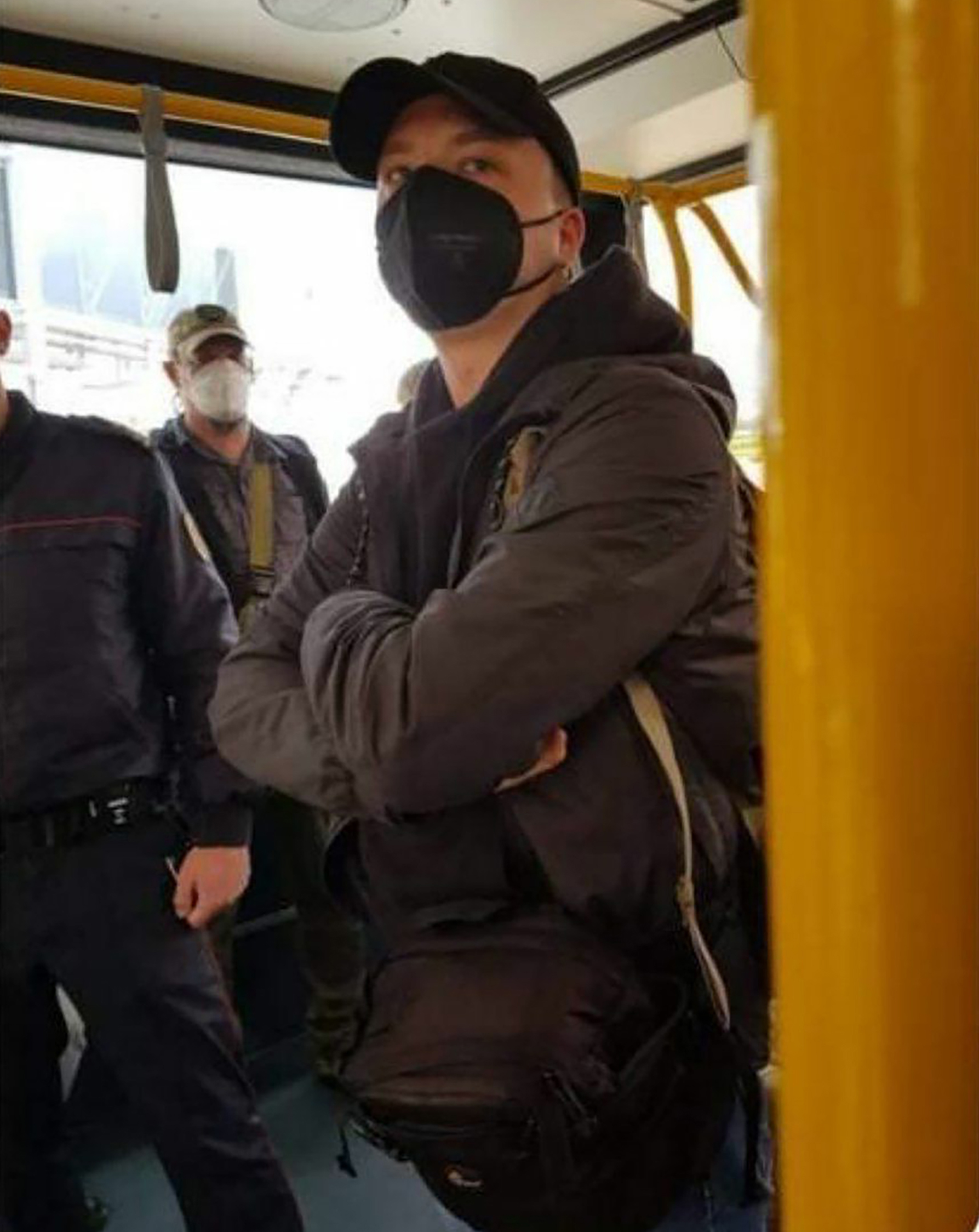 One eye-witness said Protasevich was distraught.

"Only when the guy found out that we were going to land did he get upset," said the passenger.

"We were all taken out in fours, and dogs sniffed all our things."

Protasevich "was taken to one side, his belongings were dumped onto the tarmac.

"We asked him what was going on. He said who he was and added: 'This is where the death penalty awaits me'.

"He was already calmer, but shivering.

"An officer was standing next to him all the time, and soon the military simply took him away."

The aircraft  was due to leave for Vilnius but without the detained political foe.

The head of Russian state channel RT, Margarita Simonyan, said: "I never thought I would be jealous of Belarus in any way. But right now I envy it." 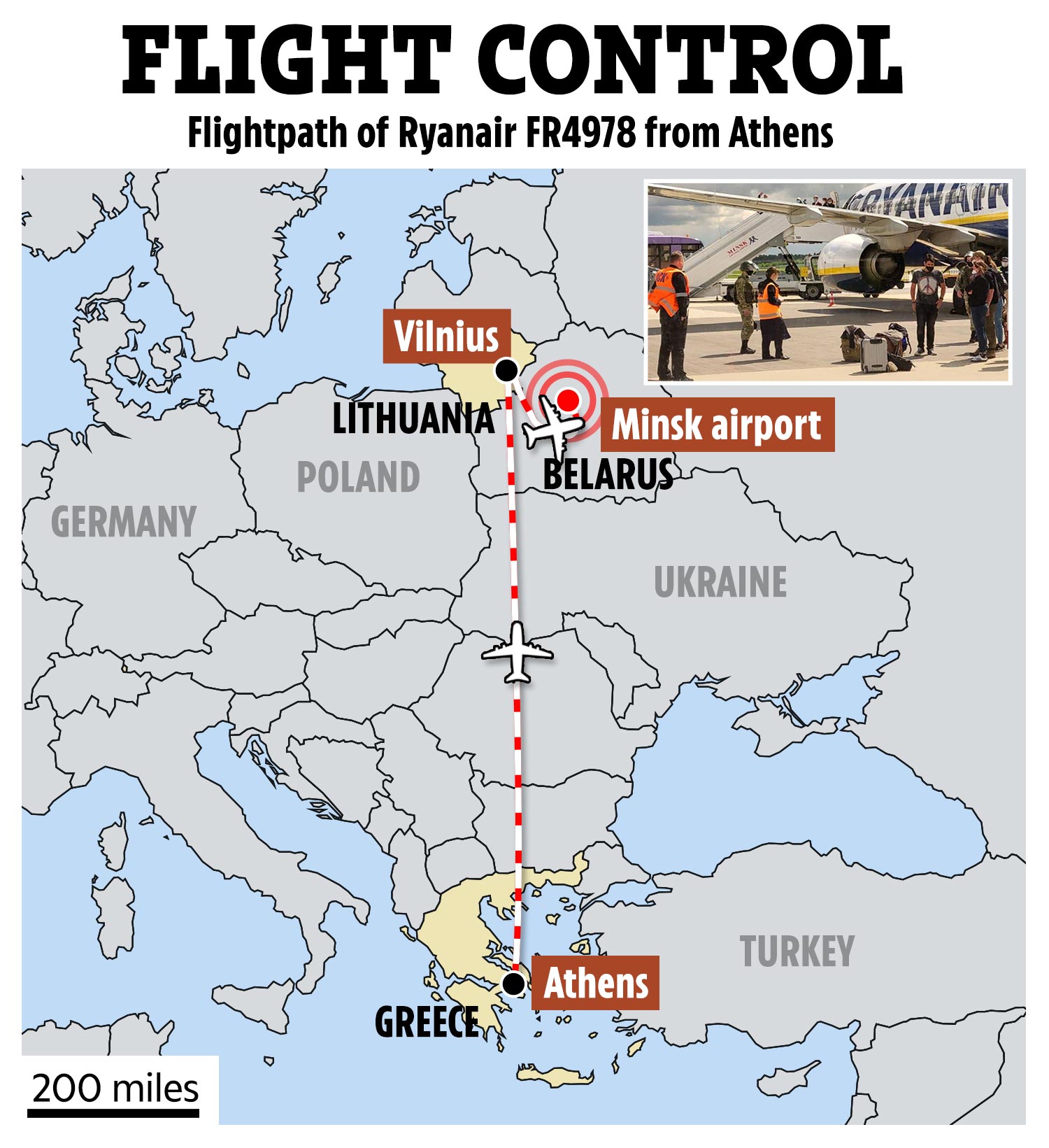 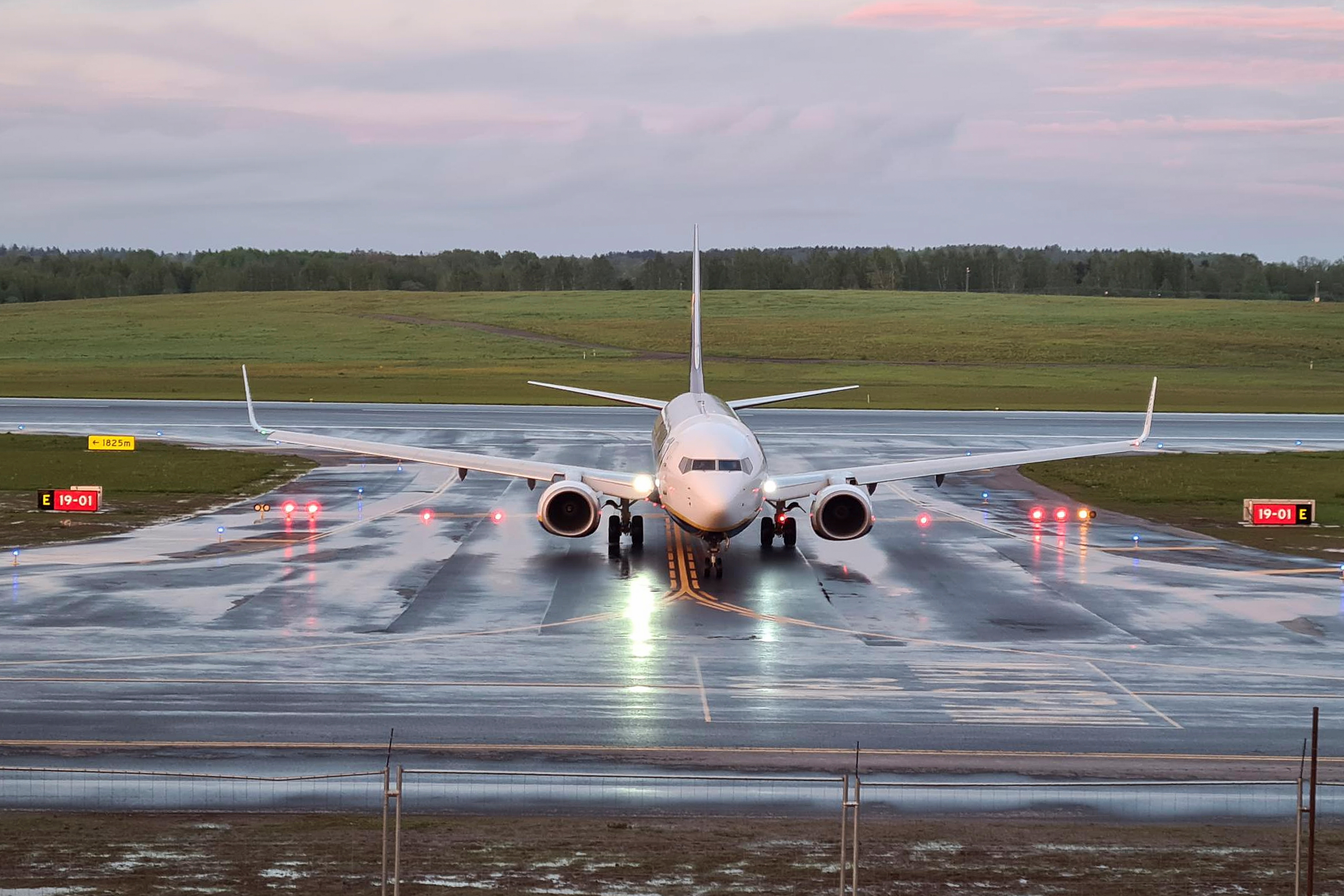 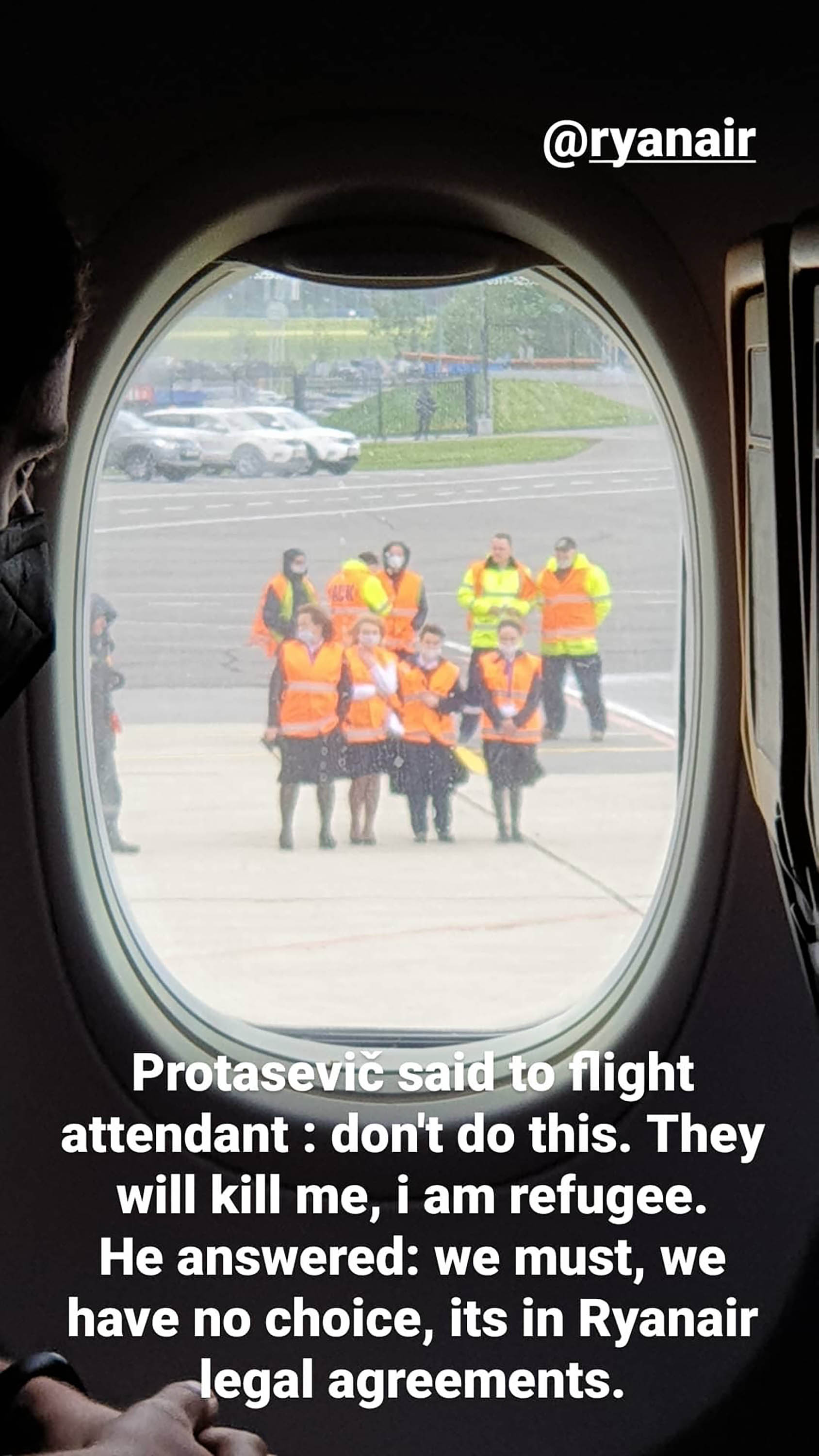 Aviation sources in Vilnius said the plane made an emergency landing due to a conflict on the plane.

"There was a conflict between a passenger and a crew member. It was decided to land the plane in Minsk,” said airport spokeswoman Lina Beisiene.

Ryanair said checks in Minsk found "nothing untoward" and the aircraft was cleared to depart after about five hours on the ground.

"Ryanair has notified the relevant national and European safety and security agencies and we apologise sincerely to all affected passengers for this regrettable delay which was outside Ryanair's control," it added.

Latvia's Foreign Minister Edgars Rinkevics said Belarus's action was "contrary to international law" and the reaction should be "strong and effective".

The EU's foreign policy chief Josep Borrell said Belarus would be held responsible for the safety of all passengers on the aircraft. 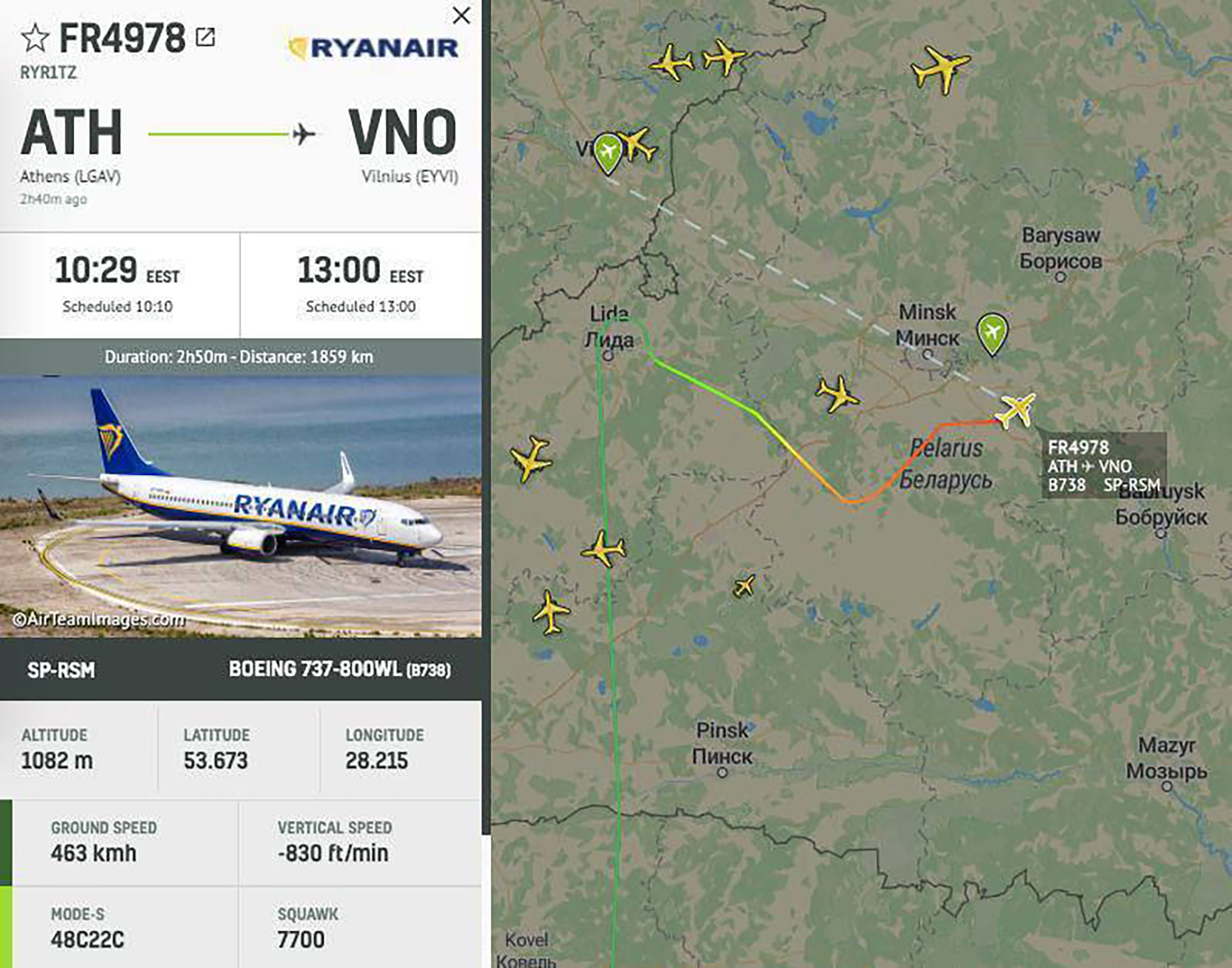 The Lithuanian civil aviation authorities had “no information” about any bombs planted onboard the plane, she said.

Belarus' state owned news agency said it was Lukashenko’s personal order to force down the plane in Minsk.

The Belarus defence ministry confirmed the detention of Protasevich, who had been living in exile.

The plane took off without the dissident,just after 6pm.

Several other European countries have reacted angrily to the news.

Opposition politicians say that the plane was forced to land in Minsk after a "bogus threat" that an explosive was on board.

Tikhanovskaya said: "It is absolutely obvious that this is an operation by the special services to hijack an aircraft in order to detain the activist and blogger Roman Protasevich.

"The regime endangered the safety of passengers on board and all civil aviation for the sake of reprisals against a man who was the editor of the largest Belarusian independent Telegram channels."

Belarus is the last country in Europe to use the death penalty.

Tikhanovskaya warned: "From now on, not a single person flying over Belarus can be sure of their safety.

"After all, the regime is abusing the rules of air traffic in order to capture those who disagree."

Protasevich had said that at Athens airport a bald Russian-speaking middle-aged man had attempted to film the main page of his passport. He then turned and left.

NEXTA was closely involved in reporting a wave of opposition protests that last year threatened to topple Lukashenko, before he was given backing by Putin

A message being retweeted in Russia read: ‘Detention of Protasevich (NEXTA) is a splendid, beautiful, complicated, (operation) in the best traditions of the Soviet KGB, the work of the Belorussian CHEKA (state security). You are cool!”

NEXTA reported: "Protasevich was on board a flight heading from Athens to Vilnius. He faces the death penalty in Belarus.

"The Lukashists [derogatory term for supporters of embattled President Lukashenko] seized the plane in order to arrest Protasevich," the channel said.

The Belarus authorities claimed its bomb-disposal squad was examining the plane, but it was later reported no explosives were found.

The official Minsk version said: "Belarus defended Europe. Information has been received that the plane has been mined."

The plane had almost left Belarus air space but was forced to land in Minsk. The situation was immediately reported to the President.

"Lukashenko gave an unconditional command to turn the plane around and receive it.

"In this situation, the most important thing is the safety and lives of people." 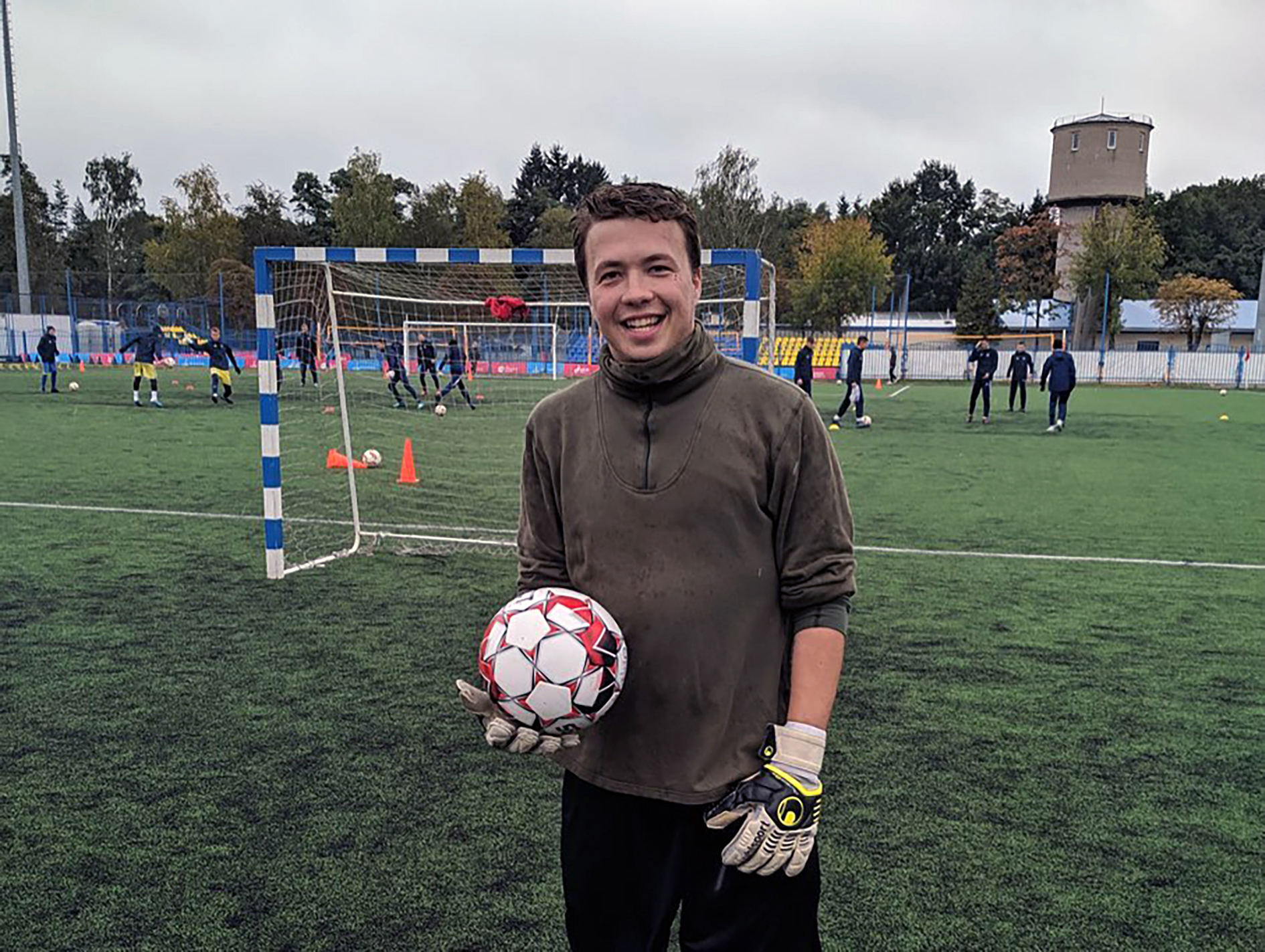 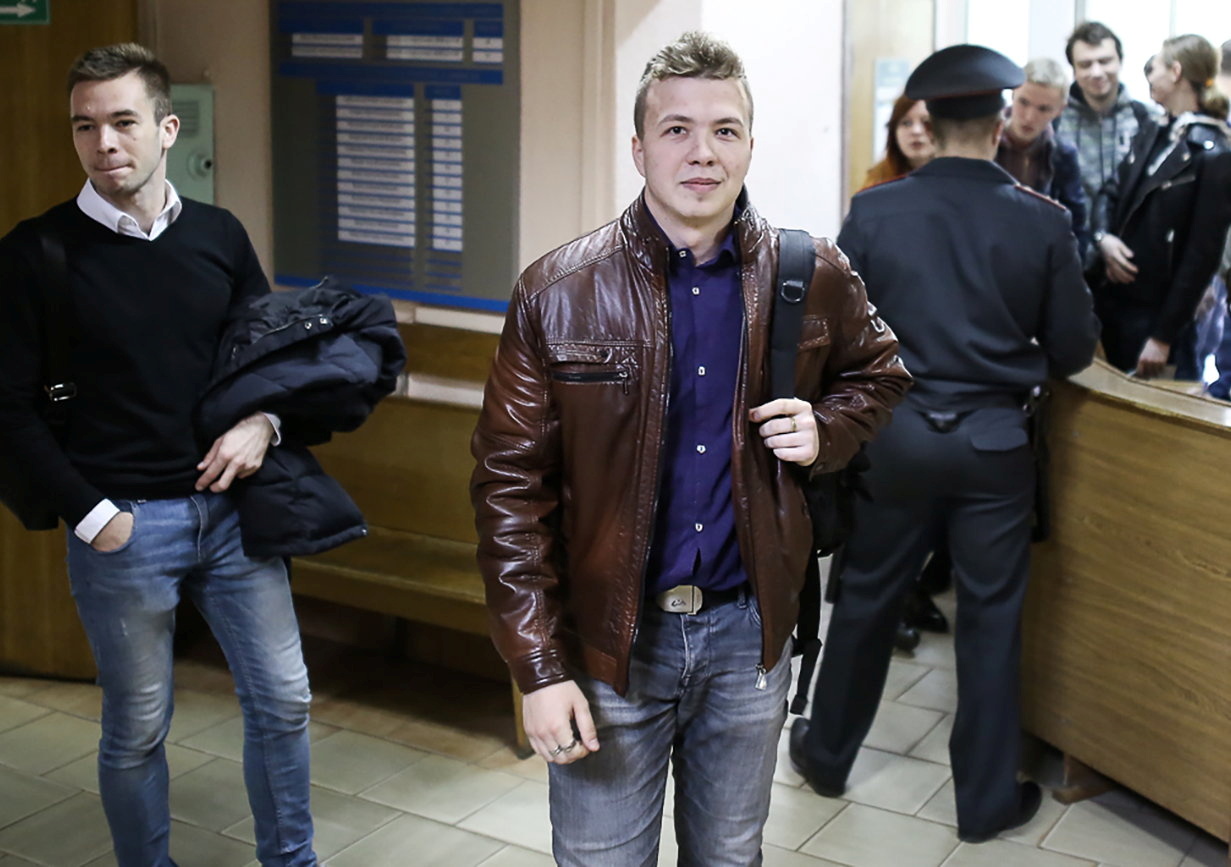 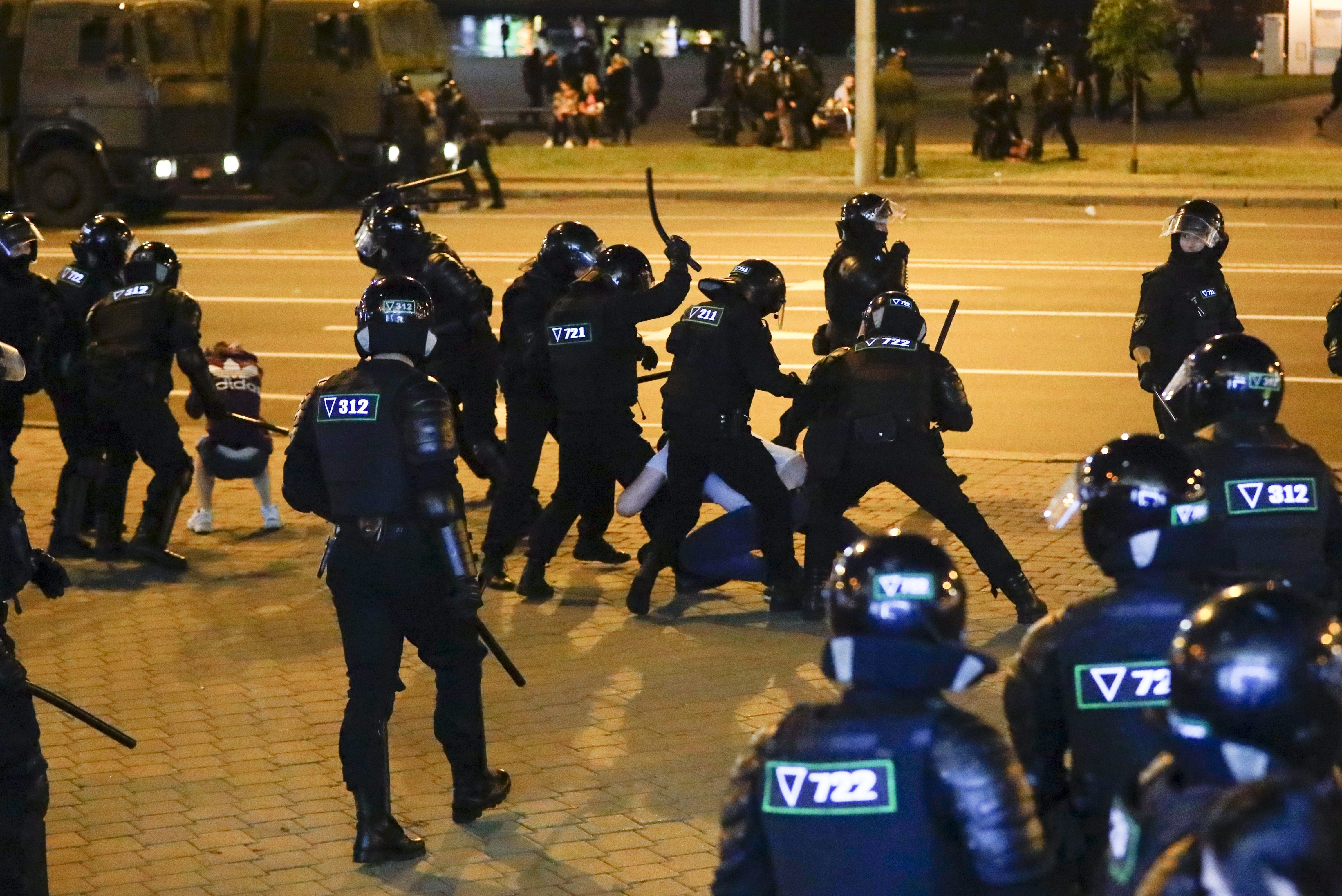