Singapore: Deputy Prime Minister Richard Marles says he expects a more powerful China to have a stronger say in international affairs, but it has a duty to reassure its neighbours that it is not a risk to their security.

In a speech to India’s National Defence College in New Delhi on Wednesday, Marles said Beijing’s military build-up had not been accompanied by effective diplomacy, forcing countries to upgrade their own defence forces in response. 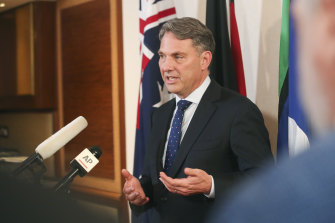 “Insecurity is what drives an arms race,” he said. “China’s military build-up is now the largest and most ambitious we have seen by any country since the end of the Second World War. It is critical that China’s neighbours do not see this build-up as a risk for them.”

Marles, who is also defence minister, said Australia was not questioning the right of any country to modernise its military capabilities in line with its growing economic and geopolitical power.

“But large-scale military build-ups must be transparent,” he said after meetings with Indian Defence Minister Rajnath Singh. “And they must be accompanied by statecraft that reassures.”

Indian and Chinese armed forces engaged in direct conflict on their shared border in Ladakh in May 2020. More than 20 soldiers were killed in hand-to-hand combat during a territorial dispute in the Himalayas.

“The global rules-based order matters everywhere, including in the highest place on earth,” Marles said. “It is vital that China commits to resolving this dispute through a process of dialogue consistent with international law.” 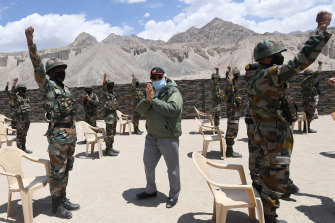 Marles said that deeper Australian-Indian security cooperation was often seen as a response to a rising China, but also subtly criticised India for its refusal to criticise Russia’s invasion of Ukraine. India is the world’s biggest buyer of Russian military equipment, spending $8 billion on arms from Moscow between 2018 and 2021 to strengthen its defence forces in response to disputes with neighbouring Pakistan and China.

“I do not come here to lecture India on how it should respond to this conflict, or how it should manage its relationship with Russia. Every country needs to make its own choices,” Marles said.

“But Russia’s war on Ukraine does teach us that we cannot just rely on economic interdependence to deter conflict; and that deterrence can fail when one country’s determined military build-up creates an imbalance of military power.”

That imbalance had encouraged Russian President Vladimir Putin to conclude the benefits from conflict outweighed the risks, said Marles. He did not name China’s harassment of Taiwan, but warned that it “is in all of our interests to ensure no country in our region ever comes to a similar judgement”.

On Tuesday, 29 Chinese aircraft, including bombers and an intelligence-gathering plane, entered Taiwan’s south-western air defence identification zone. It was the third-largest sortie of Chinese warplanes to fly near the Taiwan Strait this year.

US State Department Spokesman Ned Price on Tuesday said the US was concerned by China’s aggressive rhetoric, its increasing pressure and intimidation of Taiwan after Chinese officials reportedly attempted to claim the Taiwan Strait was no longer in international waters.

“We’ll continue, as we have said before, to fly, to sail, and to operate wherever international law allows, and that includes transiting through the Taiwan Strait,” he said.

Get a note directly from our foreign correspondents on what’s making headlines around the world. Sign up for the weekly What in the World newsletter here.