Inner Melbourne councillors have voted to press ahead with a community hub on council land rather than provide social and affordable housing.

A special meeting was held for Yarra City Council on Tuesday night after socialist councillor Stephen Jolly filed a motion to rescind last week’s vote that blocked a proposal to build 200 units surrounding Collingwood Town Hall, 50 per cent of which could have been social and affordable housing. 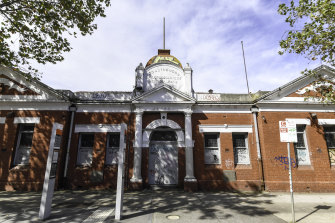 The Sailors and Soldiers Hall on Hoddle Street could form part of the redevelopment.Credit:Justin McManus

The housing development had support from the state government and could have been part-funded by the $5.3 billion Big Housing Build in a public-private partnership.

“We have to rescind this motion walking away from what I believe to be a once-in-a-lifetime opportunity,” Cr Jolly said at the special meeting.

The Greens-majority council voted down the development last week— six votes to two — with mayor Gabrielle de Vietri arguing it would have gifted council land to developers to make a profit from the remaining private units.

“I do not support the gifting of public land for private profit to developers,” she said.

An alternative motion to begin consultations for a new community hub with a library, maternal and child health centre and meeting spaces was supported by a majority.

Cr Jolly forced the decision back before Yarra on Tuesday night, but his motion failed six votes to three.

The vote came hours after a Yarra Council officer informed councillors the community hub would cost about $21 million and was unlikely to attract a funding partner or grant.

The details were provided in response to questions from Cr Jolly, who said the vote should be reconsidered because the alternative motion was tabled only half an hour before the meeting and did not include any costing.

He said socialist councillor Bridgid O’Brien’s absence last week was another justification for the notice to rescind.

“As far as I’m concerned, nothing has changed since the motion was voted for by a majority of councillors,” Cr de Vietri said.

Last week’s successful motion said the state should build an undisclosed number of social housing units for older women and families on a smaller parcel of residential land.

The housing development could have set aside 1000 square metres for community facilities and Cr Jolly argued council did not need to choose between facilities and housing while the state government was on board.

He wanted to lease the land long-term rather than sell it off.

The stoush sets the scene for the 2022 state election in the seat of Richmond, which will be fought between the Greens and Housing Minister and sitting MP, Richard Wynne.

Our Morning Edition newsletter is a curated guide to the most important and interesting stories, analysis and insights. Sign up to The Sydney Morning Herald’s newsletter here, The Age’s here, Brisbane Times’ here, and WAtoday’s here.