Foreign Secretary Dominic Raab has warned overseas aid officials to expect their budget to be slashed by £3 billion, The Mail on Sunday understands.

Mr Raab, set to take over responsibility for aid in a controversial Government shake-up, issued the budget warning in a private conversation last week.

Government sources last night blamed the pandemic for the forecast cut, pointing out that the aid budget was automatically linked to the size of the economy. 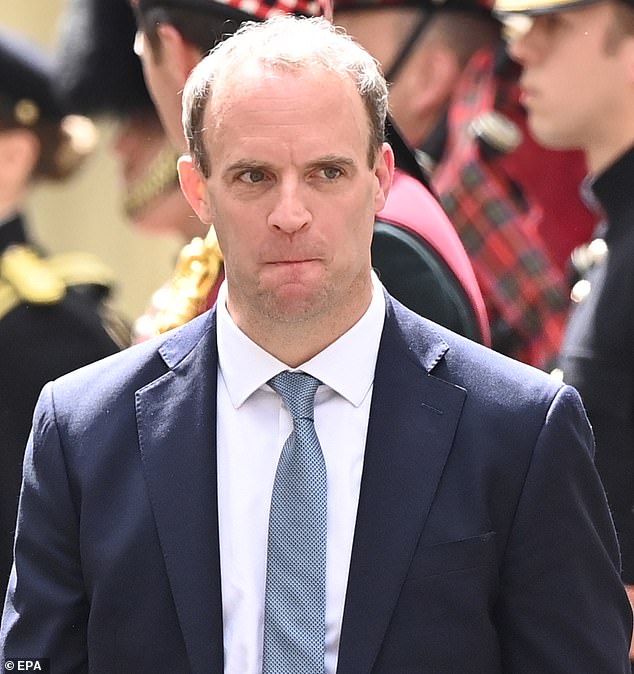 But the move comes amid anger from some leading Tories at Boris Johnson’s surprise announcement last week that he was merging the Department for International Development with the Foreign and Commonwealth Office.

The Prime Minister coupled his announcement with the claim that ‘for too long frankly UK overseas aid has been treated as some giant cashpoint in the sky that arrives without any reference to UK interests’.

Mr Raab is understood to have seen projections suggesting a huge 20 per cent contraction in the UK economy as a result of the pandemic.

Aid spending is fixed at 0.7 per cent of Gross National Income (GNI) and currently runs at about £15 billion a year. But the Foreign Secretary is understood to have warned colleagues that would fall to £12 billion on existing projections.

The departmental shake-up was met with protests from former Tory PM David Cameron and Andrew Mitchell, an ex-International Development Minister.

Mr Mitchell told The Times yesterday: ‘I’ve had messages from people all over the world who are shaking their heads in disbelief at this utterly self-inflicted act of vandalism. All their comments are in sorrow not in anger at the huge damage to our influence in the world this is going to do. I am quite certain that this is a very regressive and retrograde step.’

A Government spokesman said last night: ‘The UK is committed to spending 0.7 per cent of GNI on development.

‘This means the aid budget increases when the UK economy grows and decreases if the economy shrinks.’