Dramatic footage has emerged of a souped up race car rolling off the back of a trailer as it was being transported down a busy road.

Andrew Jackson captured the moment on his dashcam as he was coming off the M40 at Cherwell Valley, Oxfordshire.

The incredible 15-second clip shows the door of a white trailer suddenly coming down as it approaches a roundabout.

The car, previously hidden inside, then rolls out backwards onto the main road, though luckily not at too great a speed.

Its sudden emergence forces other vehicles nearby, including a red truck directly behind it and a white lorry driving round the junction, to slam on the brakes. 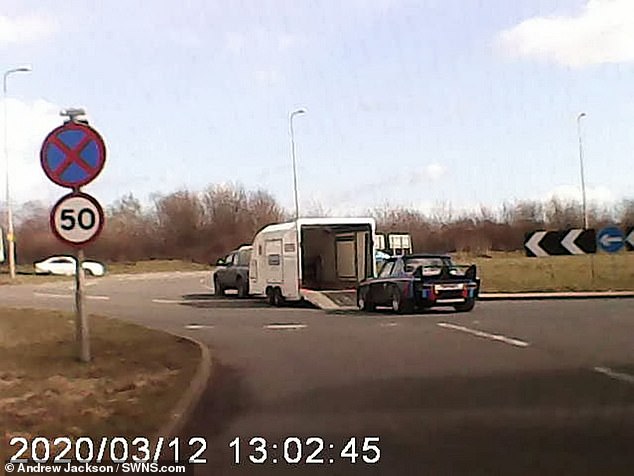 It is unclear what model the vehicle was but onlookers believe it was a ‘race-tuned’ Dutton track car.

Andrew, 55, said it was set up for racing with a ‘roll cage, a huge rear spoiler, stripped interior and a bank of toggle switches’ and no passenger seat. 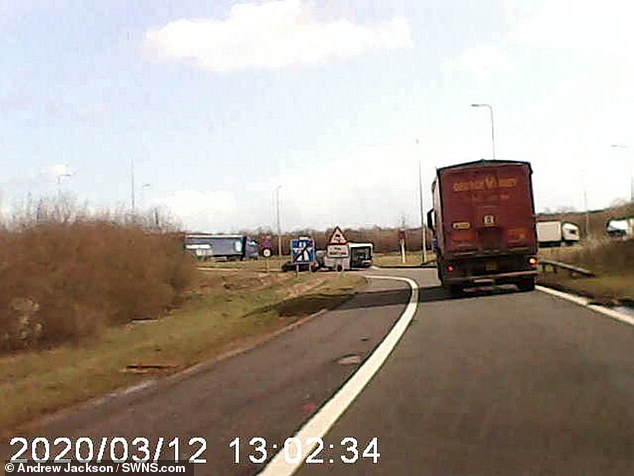 The 54-year-old had been taking his daughter, 23, to Luton Airport when he saw the door of the white trailer suddenly coming down

He said: ‘I just laughed. Obviously if it happened on the M40 it would have been completely different.’

The software engineer, from Alcester, Warwickshire, said traffic came to a stand still as all the lorry drivers and other road users got out to help. 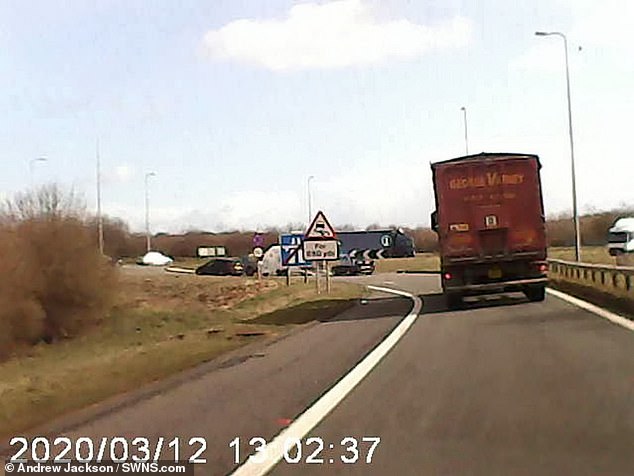 The vehicle, described by onlookers as a ‘race-tuned’ Dutton track car, then rolls out onto the road, forcing other drivers nearby to slam on the brakes

Some cars swerved the trailer, which had stopped on the roundabout, while six people helped the panic-stricken driver put the car back in the transporter.

The video was shot on March 12 as Andrew took his 23-year-old daughter to Luton Airport for her flight back to Lisbon where she is a teacher. 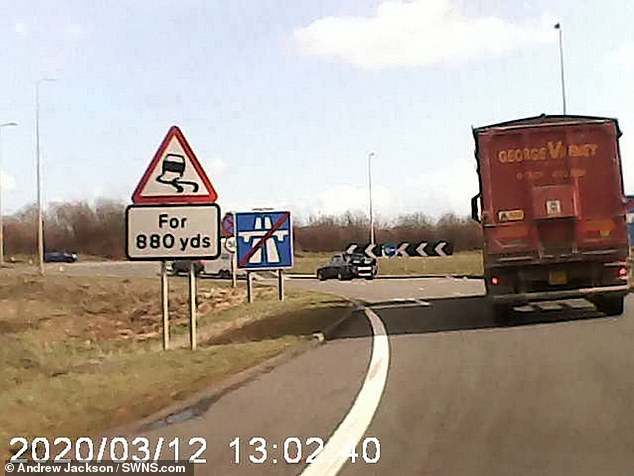 Some cars swerved the trailer, which had stopped on the roundabout, while six people helped the panic-stricken driver put the car back in the transporter

He added: ‘When I got back into the car I stopped the dashcam so I knew where it was.

‘As soon as I got back I showed my wife and daughter and sent it out to my other daughter in Portugal. They all had a good laugh.’

Canary Islands Covid tests: Brits will have to test when holidaying in Tenerife, Lanzarote and Gran Canaria this winter