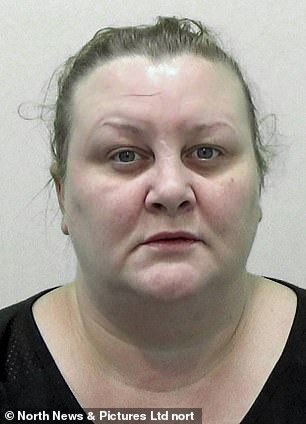 Joanna Sutherland, 40, drove her Vauxhall Zafira the wrong way down the A1(M) while three times over the drink drive limit

A drunk driver sped the wrong way down a dark motorway at 80mph and then abandoned her car in the road – as terrified drivers swerved to avoid catastrophe.

Joanna Sutherland, 40, from Gateshead, was ‘well over’ three times the drink drive limit when she got behind the wheel of her Vauxhall Zafira in the early hours of May 5.

She crashed into a barrier and got stuck in mud on the verge of the A1(M) southbound before turning her vehicle around at Washington services and driving the wrong way up the road, Newcastle Crown Court heard.

Lorries were forced to swerve out of her way to avoid a crash, before police eventually found her Vauxhall Zafira abandoned on the A194 with a flat tyre.

Sutherland, who was sat in trees nearby smoking a cigarette, recorded 122 micrograms of alcohol per 100 millilitres of breath at the time. The legal limit is 35 micrograms.

The drunk driver avoided an immediate jail term after a court heard she had been ‘very stressed and anxious’ during the Covid-19 pandemic as her partner had been shielding.

Prosecutor Neil Pallister told the court Sutherland left her home in the early hours of the morning and was seen on the A1(M) southbound at Washington by a witness who described her car ‘veering off the carriageway’. 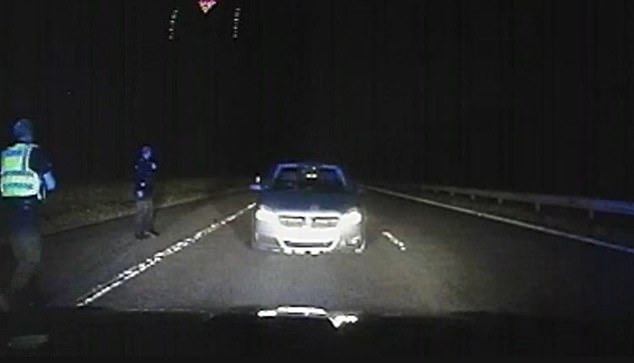 Sutherland crashed into a barrier and got stuck in mud on the verge before managing to turn her vehicle around at Washington services and travel the wrong way down the A1(M), Newcastle Crown Court heard

Mr Pallister said the vehicle ‘collided with the crash barrier and got stuck in the mud on the verge’.

The witness got out of his car and approached the Vauxhall Zafira.

‘He did try to speak to the defendant but she made no sense, she was totally incoherent and smelled of alcohol,’ Mr Pallister added.

The court heard the witness then called the police and pulled into Washington services, but heard vehicle horns as he was getting out of his car, and saw the Zafira now travelling the wrong way up the southbound carriageway.

One lorry was heading straight for it and ‘had to take evasive action to avoid a collision’, Mr Pallister said.

An off-duty police officer who joined the road then saw headlights travelling directly towards him.

Mr Pallister said: ‘The oncoming vehicle began to erratically veer into the central lane, swerving across the near side and central lanes.

‘In order to avoid the vehicle he had to drive along the tarmac verge to avoid a collision. He estimates [Sutherland] was going at about 80mph on the wrong side of the road.’

A police car on mobile patrol also had to brake and swerve to avoid crashing into Sutherland, who kept driving even after they illuminated their blue flashing lights.

Sutherland’s abandoned car was eventually found on the A194, while she sat in nearby trees smoking a cigarette.

Footage of the moment the vehicle was located captures the Vauxhall Zafira parked in the middle of a lane with its headlights illuminating the road. 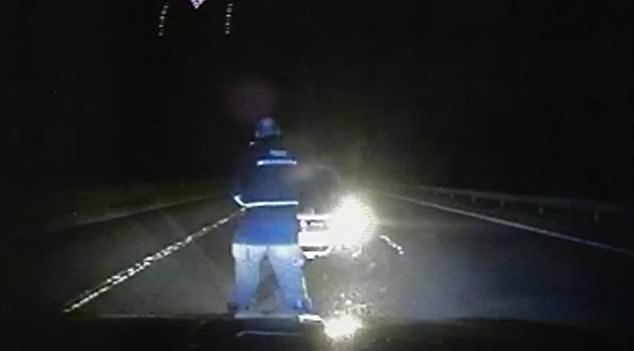 Lorries were forced to swerve out of her way to avoid a crash, before police eventually found her Vauxhall Zafira abandoned on the A194 with a flat tyre (pictured) 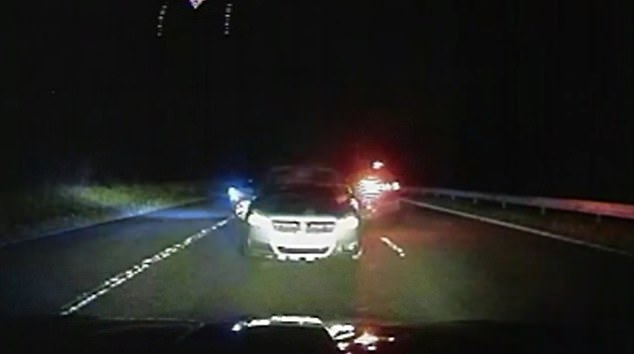 A man then looks inside the car and appears to discover it is empty, before heading to the hard shoulder and surveying the area.

Police officers then approach, and begin making their way through greenery on the verge where Sutherland was discovered following the incident.

Mr Pallister said she was ‘heavily intoxicated and unable to stand unaided’.

Annalisa Moscardini, defending, said Sutherland ‘has no memory of [the incident] and is deeply ashamed of what happened’.

Judge Julie Clemitson told her: ‘There was some traffic around at the time, one HGV drivers tried to attract your attention and one had to take evasive action.

‘You carried on, oblivious to these vehicles warning you you were going the wrong way.

‘You had a near miss with an off duty police officer effectively playing dodgems on a three lane motorway with a car coming towards him at speed in the dark.

‘This was an extraordinarily dangerous situation for other road users. You were clearly very drunk and oblivious to your surroundings.’

The judge added: ‘It’s obvious you are very remorseful and ashamed of your behaviour.

‘The situation you found yourself in during lockdown, isolated from members of your family and anxious about the illness itself and the impact on your partner, resulted in the deterioration in your mental wellbeing.

Sutherland pleaded guilty to dangerous driving and driving while over the legal alcohol limit.

She was sentenced to 12 months in prison, suspended for 18 months, and banned from driving for five years. The judge also imposed a two-month curfew ordering her to stay at home between 8pm and 7am.