76 per cent of Russians have voted in favour of constitution change that will enable Putin to stay in power until 2036, exit polls show

The poll, published on Monday, showed that some 76 percent of respondents voted for the package of amendments, which range from better pensions and minimum wages to a reset of term limits that would allow President Vladimir Putin to run again in 2024 and potentially stay in power until 2036.

The vote, which the opposition has slammed as illegal and prone to rigging, began last week and is due to end on Wednesday. 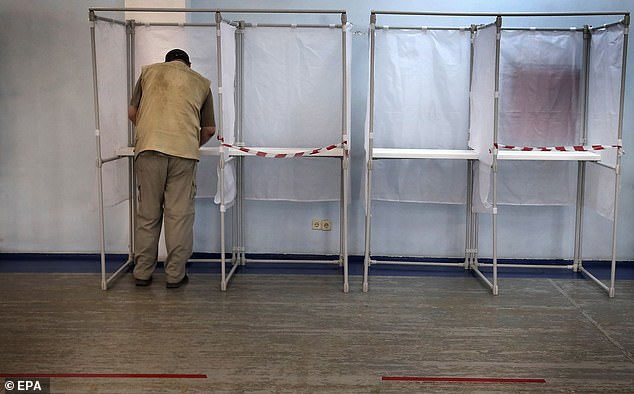 Russian state pollster VCIOM has published an exit poll showing a vast majority of Russians backing proposed constitutional reforms, days before the end of voting. Above, a man votes at a polling station in Moscow

VCIOM, which stands for the All-Russian Public Opinion Research Centre, polled more than 163,000 voters in 25 regions, with about 70 percent agreeing to say how they voted.

The co-chairman of election monitoring group Golos, Grigory Melkonyants, told Business FM radio that the publication of figures before the end of voting could unduly ‘influence the will of citizens’.

This is why the publication of exit polls is banned before the end of voting, he noted.

VCIOM said it decided to publish the figures because of ‘high demand’ for the data and dismissed the idea that it could influence the outcome.

‘It’s not against the law to publish,’ the centre’s director Valery Fyodorov told AFP in an emailed comment.

Election commission chief Ella Pamfilova said the body had recommended to wait until the end of voting but that the centre did not do anything illegal.

The constitutional vote has to abide by its own special law, rather than Russia’s regular election legislation, which forbids publication of data during a ‘silent period’ immediately before and during voting. 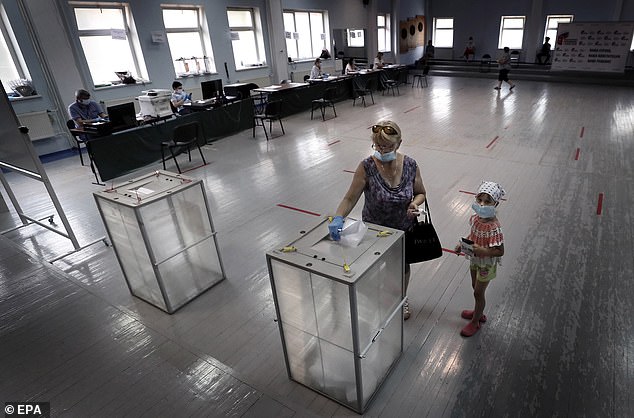 Voting started in Russia on Thursday after a decision to spread the plebiscite over a week to avoid crowds during the coronavirus epidemic. Above, woman votes at a polling station in Moscow 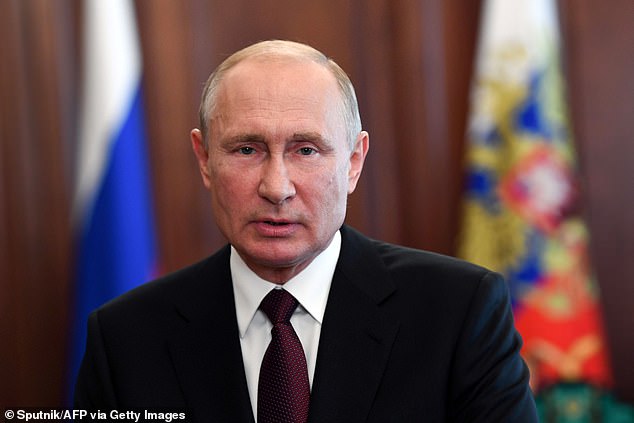 ‘The law (on the constitutional vote) does not regulate this,’ Pamfilova told Business FM radio.

Voting started in Russia on Thursday after a decision to spread the plebiscite over a week to avoid crowds during the coronavirus epidemic.

Advertisements running frequently on television ask Russians to vote without any mention of the clause that effectively ‘zeroes’ Putin’s time in the Kremlin and opens the possibility of him staying on for two more terms until 2036.

The Kremlin reluctantly postponed the vote, originally scheduled for April 22, as coronavirus cases increased and officials imposed restrictions to slow the spread.

Residents of separatist-controlled regions in eastern Ukraine who have Russian citizenship are travelling to Russia to vote on the constitutional amendments.

Authorities of the self-proclaimed Luhansk and Donetsk People’s Republics have organized bus services to polling stations in the neighboring Rostov region in Russia, in what is seen by many as part of the widespread effort to boost turnout at the controversial plebiscite. 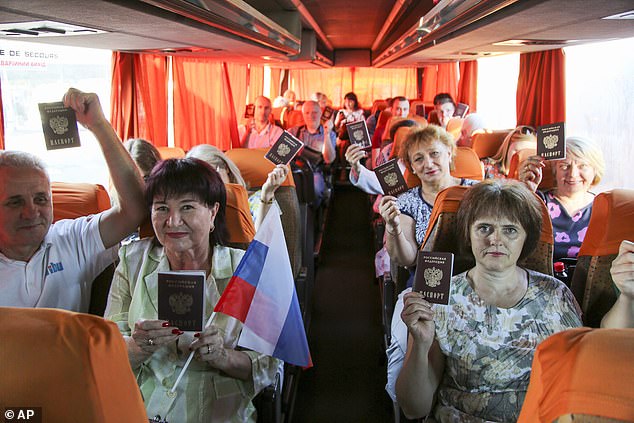 Residents of separatist-controlled regions in eastern Ukraine who have Russian citizenship are travelling to Russia to vote on the constitutional amendments. Above, people show their Russian passports at a bus stop in Donetsk, eastern Ukraine 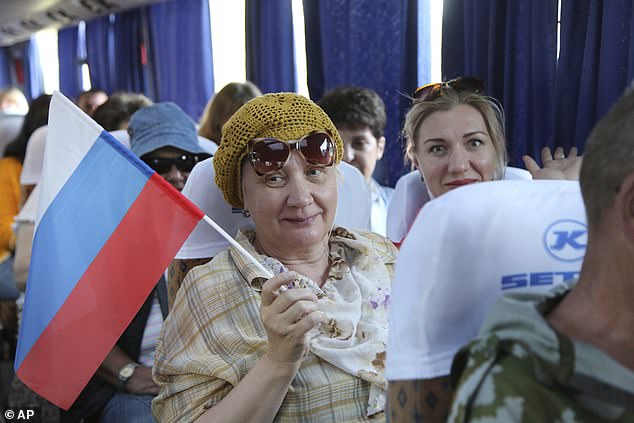 Russian authorities this month have gone to great lengths to lure voters to polling stations amid the coronavirus outbreak. Above, a woman holds a Russian national flag sitting on a bus to Russia at a bus stop in Donetsk, eastern Ukraine

On Friday morning, dozens of people gathered at a bus station in Donetsk, a rebel-controlled city in eastern Ukraine, waiting to get on a bus to Russia. Some of the voters told The Associated Press that the constitutional changes would boost the powers of the Russian authorities and bring peace to the separatist region in eastern Ukraine. Others expressed hope that the changes would allow separatist republics to become part of Russia.

Russian authorities this month have gone to great lengths to lure voters to polling stations amid the coronavirus outbreak. Allowing residents of eastern Ukraine to participate is part of this effort, independent foreign affairs analyst Vladimir Frolov said.

‘(Russian authorities) are obsessed with the results (of the vote),’ and rebel-controlled areas in eastern Ukraine can contribute some ‘manageable voting,’ he said.

Over 220,000 Ukrainians living in areas held by Russia-backed rebels received Russian passports last year, after Putin signed a decree expediting citizenship applications from residents of the self-proclaimed republics. The move had been widely condemned as an attack on Ukraine’s sovereignty that could undermine efforts to end a separatist conflict that has killed more than 14,000 since 2014.

More than 150,000 residents of eastern Ukraine have expressed a desire to cast a ballot in the vote on the constitutional reform, Russian lawmaker Victor Vodolatsky told the state Tass news agency last week. 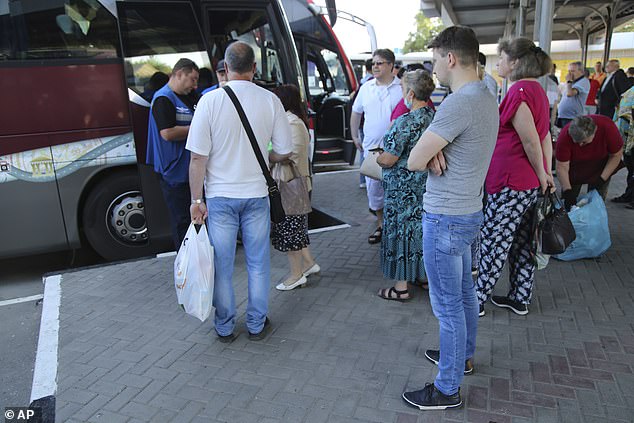 Over 220,000 Ukrainians living in areas held by Russia-backed rebels received Russian passports last year. Above, people observe social distancing guidelines to protect against coronavirus as they queue to get on a bus to Russia at a bus stop in Donetsk, eastern Ukraine

Russia’s borders have been closed since late March because of the coronavirus outbreak but there are procedures to allow Russian citizens to enter, Kremlin spokesman Dmitry Peskov said Friday, commenting on the fact that voters from eastern Ukraine are able to travel to Russia.

According to separatist officials, there are 12 polling stations in the Rostov region where residents of eastern Ukraine can vote. The regional election commission confirmed to the AP that polling stations for Russian citizens not registered as residents were operating all across the region.

Russian election monitors point out that bringing residents of eastern Ukraine into Russia to vote could make it easier to rig the vote. Non-resident voters are not registered with a specific polling station, and with several stations operating in the Rostov region, it will be difficult to verify that they haven’t voted several times at different polls, said Vladimir Yegorov, coordinator of election monitoring with the Golos independent election watchdog.

‘The vote lasts seven days, and a person, if they so wish, can vote several times at several polling stations, and there is no way to control it,’ Yegorov said.