Adelaide, Tuesday – The famous Antarctic explorer and geologist, Sir Douglas Mawson, died tonight at his home at Brighton. He was 76. 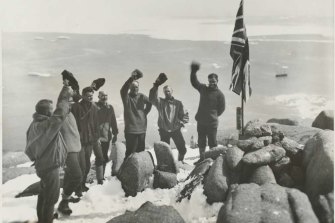 He had been in ill health for some years.

The late Sir Douglas Mawson was a man in whom scholarship, leadership and courage were generously combined to make a great Australian and a world famous figure in the history of polar exploration.

He has been acclaimed by a fellow Antarctic adventurer as “one of the greatest figures in all polar exploration, north or south.”

The catalogue of his achievements in many fields will fill a significant page in Australian history. The record of his adventures is more thrilling than any work of fiction.

Sir Douglas Mawson was himself so modest that his eminence in the realm of scientific exploration was not realised by those among whom he lived.

Beyond South Australia, where he had made his home for more than 50 years, Sir Douglas Mawson’s work was more appreciated.

After winning distinction as a member of Sir Ernest Shackleton’s Antarctic team (1907-9) he led his own principal expedition south in 1911.

In spite of tragedy which involved the death of two of his companions and came within an ace of costing him his own life, Sir Douglas Mawson achieved results which for their scope and scientific importance have never been executed in any similar endeavour.

“Australia’s present position in the Antarctic is due entirely to the foresight, imagination, energy and stimulation of Sir Douglas Mawson,” the director of the Antarctic Division of the Department of External Affairs (Mr P. G. Law) said last night.

Mr Law said that during a period of 50 years Sir Douglas Mawson was “always looking forward, always young in heart and in enthusiasm; an inspiration to all of us of this younger generation.

“He provided unfailing support, kingly and wise advice, and a close personal interest in the A.N.A.R.E., which he was, of course, instrumental in establishing in 1947.

“Mawson station and the research results from it and other Australian Antarctic bases will stand as memorials to this very great Australian pioneer,” Mr Law said.