This is the heart-stopping moment a girl risks her life by walking across the top of a ruined castle.

The teenager was spotted balancing on the summit of Sandsfoot Castle in Weymouth, Dorset, and perched on top of a narrow crumbling wall.

She doesn’t seem to be concerned about the dangerous 30ft drop below her.

It was a resident saw the young woman as she climbed over a metal fence, erected to protect the precious site, and clambered up the castle.

This comes after police increased patrols of the historic ruin because of teenagers having late night parties and climbing on it.

The castle, which was built by Henry VIII to protect against invasion by France, was closed to the public in January after dangerous cracks appeared in the castle walls.

The resident, who wished not to be named, said the youths risked ‘certain death.’ 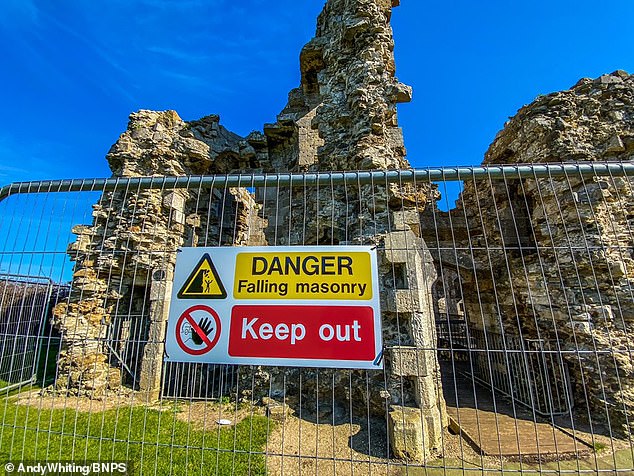 Sandsfoot Castle in Dorset has metal fencing with warning signs for the public to keep out due to falling masonry, pictured

She said: ‘It was recently fenced off by the local authority for reasons of safety and this delightful attraction has bought pleasure to many over the years.

‘However, it is now a site of parties and thuggish behaviour, which is causing not only danger to the people who are doing it, but also to the castle structure.

‘The whole reason it’s now inaccessible is because it’s not safe to be inside – let alone on top of.

‘If any of these youths fall, it will most certainly be to their death.

‘They won’t be laughing then, that’s for sure.’

The woman added that police visits proved ‘fruitless’ and that the teenagers run away as soon as officers arrive.

‘With loud music and parties being held in the base of the castle, and people sitting on the top to keep watch, things are simply getting worse,’ she said. 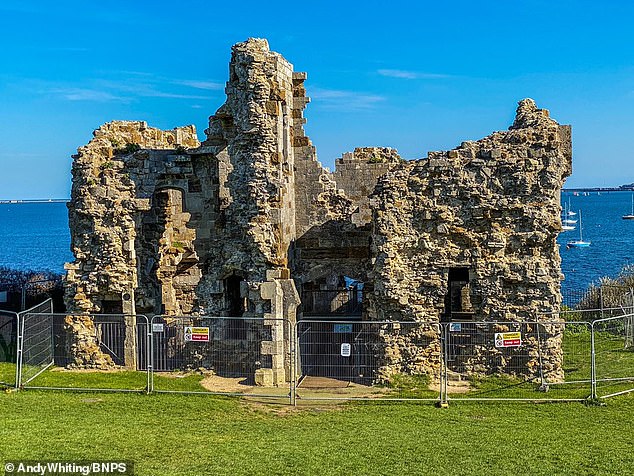 The castle was built by Henry VIII to protect against invasion by France, was closed to the public in January after dangerous cracks appeared in the castle walls

Heritage England recently announced they had added the castle to its ‘at risk’ list as the landmark continues to deteriorate.

A spokeswoman for Dorset Police said behaviour ‘of this nature is clearly dangerous’ and ‘could result in serious injury’.

She said: ‘We would strongly urge people to show respect for their local area and we will take appropriate action against anyone involved in anti-social behaviour.

‘Local officers are aware of these issues and will continue to carry out increased patrols in the vicinity.’