Nationals MP Tim McCurdy can retain his seat in Victoria’s Parliament after having five fraud charges against him dismissed by a judge over a lack of evidence during his trial.

Mr McCurdy was facing a trial in the County Court over allegations he illegally pocketed $269,000 in commissions over the sale of two farms in north-eastern Victoria in 2009, when he worked as a real estate agent before entering politics the following year. 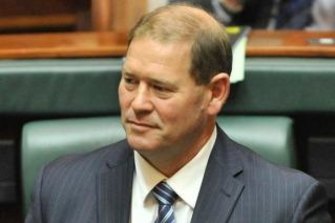 Nationals MP Tim McCurdy has been found not guilty on five fraud charges.

The 58-year-old denied the allegations. 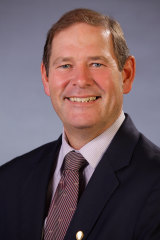 Judge Georgiou made the ruling after Mr McCurdy’s lawyers submitted he had no case to answer.

The judge entered verdicts of not guilty for all five charges and dismissed the jury that began hearing the case last week.

“There is simply no evidence that would satisfy all of the elements of offences charged,” he told the jury.

Mr McCurdy was elected as the MP for the seat of Ovens Murray in 2010 and would have been forced to resign from Parliament had he been found guilty, which in turn would have triggered a byelection for what is a safe Nationals seat.

Outside court, the father of four said he was relieved his “horrible journey”, spanning years of investigation to trial, had come to an end.

“Even though you can be confident with what the outcome is going to be, sitting before a jury is not a lot of fun,” he said, as family members stood nearby.

“I’m just delighted that we’ve got to this place with no case to answer.”

Mr McCurdy said he was re-elected in the 2018 state poll with the allegations hanging over him, but said the saga had taken “an emotional and financial toll”.

He also hit out at “a few people with dirt under their fingernails and a few with the axe to grind” who had brought the allegations and said the truth would “come out in the passage of time”, though he said he would not be taking civil action.

Mr McCurdy, a dairy farmer and real estate agent before he entered politics, was the state opposition’s spokesman for sport, veterans, gaming and liquor control until he stepped down when charged by police in 2018.

He is one of just six Nationals MPs in Victoria’s lower house.

Our Morning Edition newsletter is a curated guide to the most important and interesting stories, analysis and insights. Sign up here.