A MAN has been left stunned after finding a message in a bottle that was stashed between walls for 47 years.

Matt Streatfeild discovered the letter, which gives a snapshot of how life used to be 50 years ago, inside a glass milk bottle, during renovations at his home in Newcastle, New South Wales. 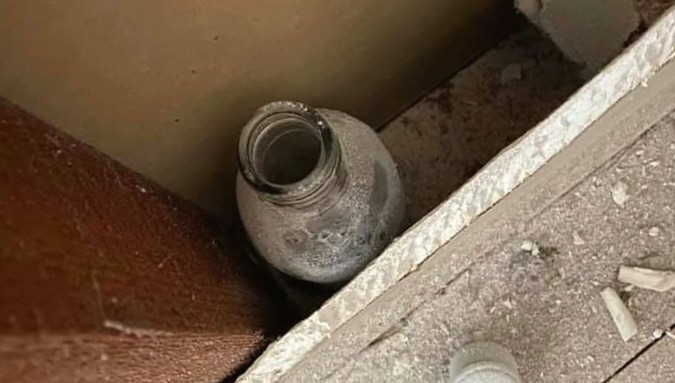 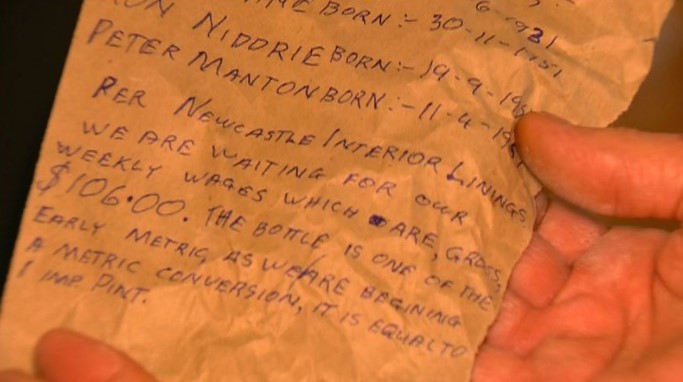 He told NBN News: "You always hear the legend of messages in a bottle, but you never think you'll find one in between two walls in your own house."

The note, dated April 5, 1974, was written by the two plasterers who built the walls in the property.

The two writers included notes on the conversion from the imperial to the metric measuring system and even noted that the milk bottle itself was one of the first to have millimeters on the label.

They added that they were expecting a weekly wage of $106 from Newcastle Interior Linings- a company that still exists today.

Streatfeild was eventually able to track down one of the writers of the note, Ron Niddrie,66.

Mr. Niddrie said: "One of these little mementos has paid off.

"The fact that it was 47 years ago was even more of a shock."

Mr Streatfeild said he will return the bottle and a memento of his own once the wall is reconstructed.

"When we re-sheet this wall we're going to place the old bottle that we found from 1974 with that piece of history, and we're going to add our own, "he said.

"Little face mask from 2021 and a bit of a description of how life's been for the last couple of years."

It is not the first time someone lucky discovered a message from so long ago.

Back in June, a mum discovered a 100-year-old message in a bottle whilst scuba diving.

Jennifer Dowker came across the green glass bottle in the Cheboygan River, in Michigan, US.

The note read: "Will the person who finds this bottle return this paper to George Morrow, Cheboygan, Michigan and tell where it was found? November 1926."

Another message that appears to have been thrown from the deck of the Titanic hours before it sank, has left experts baffled.

The intriguing note, dated April 13, 1912, was written by 12-year-old Mathilde Lefebvre and it reads: "I am throwing this bottle into the sea in the middle of the Atlantic. We are due to arrive in New York in a few days.

"If anyone finds her, tell the Lefebvre family in Liévin."