London: Sviatlana Tsikhanouskaya has been living in exile for almost a year. She fled Belarus last August after being detained in the wake of a disputed presidential election in which, as a stand-in candidate for the opposition, she became the figurehead for mass anti-regime protests.

Now, after the unexplained death of Vitaly Shishov, a young anti-regime activist living in Ukraine, the leader of Belarus’s opposition fears not only for her own life and that of her team, but of all Belarusian exiles.

She is calling for Western nations to offer Belarusian dissidents abroad training in counter-spycraft to help protect them from the regime of long-time leader Alexander Lukashenko. 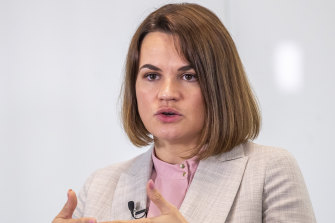 Shishov was found hanged in a Kyiv park near his home. Ukrainian authorities have opened a murder investigation, while his associates say they have “no doubt” he was killed by the Belarus government.

Tsikhanouskaya said that she will closely monitor the results of the police investigation. But Shishov’s death has sent a fresh wave of fear through the Belarusian diaspora.

“Of those who are in exile, nobody can feel safe now. We see that the regime can do anything”, she said, speaking from her office in Vilnius after a meeting in London with Boris Johnson, the Prime Minister.

“Of course, Western countries can’t take care of every person, it’s impossible,” she said. “But they can offer platforms for education: how to behave when you think you are being followed by someone, what to do, who to call, where to go.”

Activists in neighbouring countries were at particular risk, suggested Tsikhanouskaya.

In May, Belarus used a fake bomb threat to forcibly divert to Minsk a Ryanair flight carrying Raman Pratasevich, an anti-government blogger, who was then detained.

Tsikhanouskaya, who initially signed up as a candidate in last year’s election after her husband was arrested and prevented from running, said she and her staff feared for their wellbeing.

“I don’t think my team and I feel safe,” she said, adding that they had heard of written “bomb threats” against their buildings in Vilnius being sent to Lithuanian authorities.

As well as the numerous opposition figures forced into exile, thousands of Belarusian dissidents who have stayed in the country have been jailed.

An opposition leader who ripped up her passport to stop officials from expelling her from Belarus went on trial on Wednesday (Thursday AEST).

Maria Kalesnikava, a flute player who became one of the public faces of last year’s protests, smiled, danced and made her trademark heart-shape symbol with her hands to reporters as she and Maksim Znak, a lawyer and fellow opposition activist, stood in the defendants’ cage.

They face as much as 12 years in prison at the closed-court hearing on charges of public calls to harm national security, conspiracy to seize power and organising an extremist group.

“Don’t trust, don’t be afraid, don’t plead – and laugh — that’s my principle for communicating with them,” Kalesnikava said of Belarusian authorities in an interview from detention published Wednesday by Russia’s TV Rain channel. She said she’d rejected officials’ attempts to get her to take part in staged interviews with state television or plead for clemency because she’s innocent.

“Don’t trust, don’t be afraid, don’t plead – and laugh — that’s my principle for communicating with them.”

She also called for more generous flexible financial support, especially for those dissidents still in Belarus, saying Western countries needed to get comfortable with cryptocurrencies as a way to pay them.

“It’s impossible to bring, physically, this financial help or to deliver it via bank cards, because these are blocked, so we have to find ways to transfer the money,” she explained.

Asked how she saw the future of Belarus’s democracy movement, Ms Tsikhanouskaya was optimistic. She said sanctions could be tightened but should be given time to work.

“The people around Lukashenko know this regime is over, that this regime has run out of road.”