Norway adjusts Covid vaccine advice for doctors after admitting they ‘cannot rule out’ side effects from the jab were behind 23 deaths in ‘elderly, frail’ patients

Norwegian health chiefs have said that side effects of the Covid-19 may have caused the deaths of 23 elderly people.

The country’s medicines agency reported today that of these fatalities, 13 have been autopsied and showed signs of suffering side effects such as fever and nausea.

All of these patients had recently received the jab and were nursing home residents over the age of 80.

The Norwegian Medicines Agency stressed they were not alarmed by the deaths – they expected some – but is updating its advice to allow doctors to make a judgement whether to vaccinate their most frail patients.

Sigurd Hortemo, chief physician, said ‘common adverse reactions to mRNA vaccines, such as fever and nausea, may have contributed to a fatal outcome in some frail patients,’ in the body’s first report on vaccine side effects.

The agency noted that clinical trials of the Pfizer/BioNTech vaccine ‘did not include patients with unstable or acute illness – and included few participants over 85 years of age.’

The agency added in a statement: ‘We cannot rule out that adverse reactions to the vaccine occurring within the first days following vaccination (such as fever and nausea) may contribute to more serious course and fatal outcome in patients with severe underlying disease.’

Steinar Madsen, medical director with the agency, said: ‘We are not alarmed by this. It is quite clear that these vaccines have very little risk, with a small exception for the frailest patients.’

He added: ‘Doctors must now carefully consider who should be vaccinated. Those who are very frail and at the very end of life can be vaccinated after an individual assessment.’ 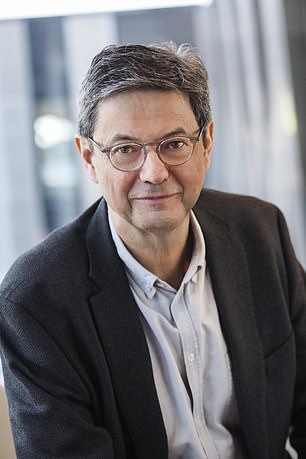 Sigurd Hortemo, chief physician, said ‘common adverse reactions to mRNA vaccines, such as fever and nausea, may have contributed to a fatal outcome’

A total 29 people in Norway have had confirmed side effects shortly after getting the jab out of more than 30,000 people to have received their first shot of the Pfizer or Moderna coronavirus vaccine since the end of December.

Earlier this week, the Norwegian Institute of Public Health said that ‘any side effects of the vaccine will be outweighed by a reduced risk of becoming seriously ill with Covid-19 for elderly, frail people.’

It added that ‘for very frail patients and terminally ill patients, a careful balance of benefit versus disadvantage of vaccination is recommended.’

In its report, the Norwegian Medicines Agency said that 21 women and eight men had side effects.

The nine patients had allergic reactions, strong discomfort and severe fever while the less serious side effects included severe pain at the injection site.

Overall, Norway has seen 57,279 cases and reported 511 deaths during the pandemic.

Across the world, officials expect deaths and other severe side effects to be reported after any mass vaccination campaign given the huge numbers of people involved.

But determining whether or not the vaccine caused deaths can be very challenging and requires that all other potential causes be ruled out first.

The United Kingdom and the United States have also reported a number of cases of side effects that had fatal consequences.

The European Medicines Agency said Friday that it will receive and consider monthly safety reports from companies authorized to sell vaccines, starting in January with the Pfizer jab.