Gigantic nuclear-powered ‘flying hotel’ capable of carrying 5,000 passengers and staying airborne for months at a time is unveiled in outlandish concept design

Is it a bird? Is it a plane? To be honest, we’re not sure quite what this is.

Graphic artist and YouTuber Hashem Al-Ghaili has invented a cruise ship for the clouds, with room for 5,000 passengers, named the ‘Sky Cruise Hotel’.

No pilot, no need to refuel and a chance for lucky voyagers to see the Northern Lights up close every single night. As one Facebook commenter wrote, ‘What could possibly go wrong?’

With his audacious idea, Mr Al-Ghaili has divided the internet between idealists and realists.

The Yemeni science communicator describes his ‘sleek design’ as combining ‘the features of a commercial plane with the epitome of luxury’. 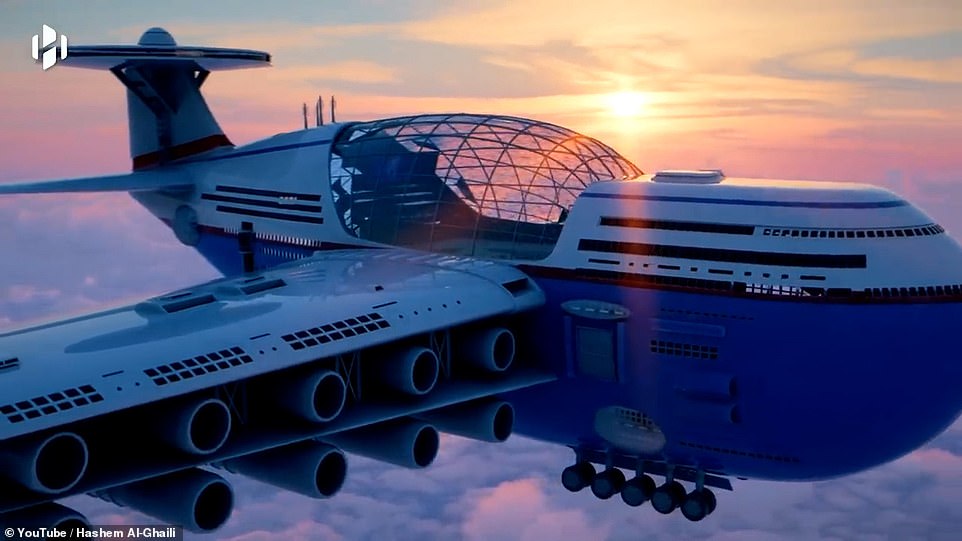 The huge flying cruise ship is ‘the future of transport’, its wacky graphic designer and YouTuber has boldly proclaimed

You can even get married in its incredible, 360-degree observation platform high above the rest of the plane.

Most incredibly, though, it’s nuclear-powered – meaning it is fuelled by a fusion reactor onboard, so it would never need to land to refuel.

Passengers and crew can be brought up on separate aircraft to the permanently in-flight vessel, which appears to have no fewer than twenty jet engines.

Al-Ghaili has said the plane represents ‘the future of transport’ and would fly 24 hours a day.

But as it never lands, where it would actually ‘transport’ people to and from remains somewhat unclear. 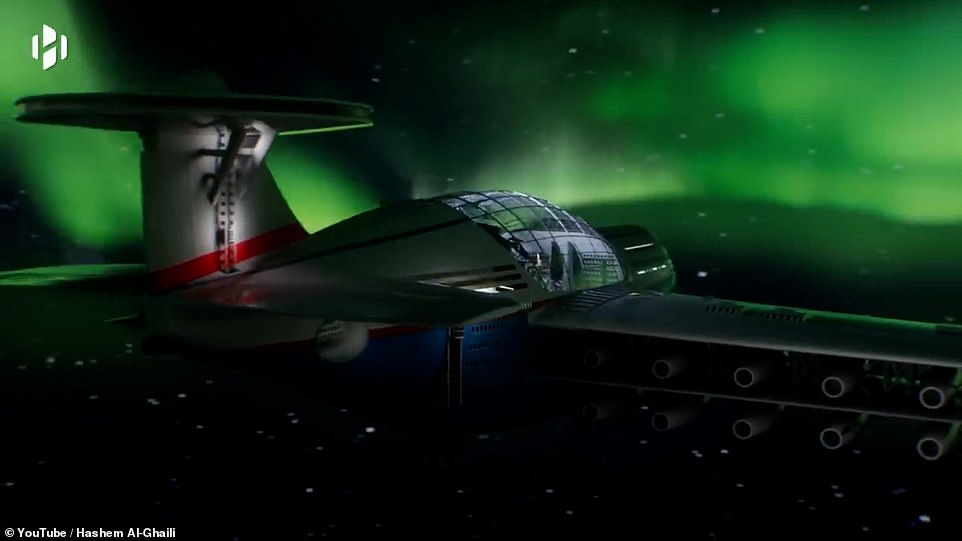 The plane’s lucky 5,000 passengers would be able to see the Northern Lights up close every single night of their voyage 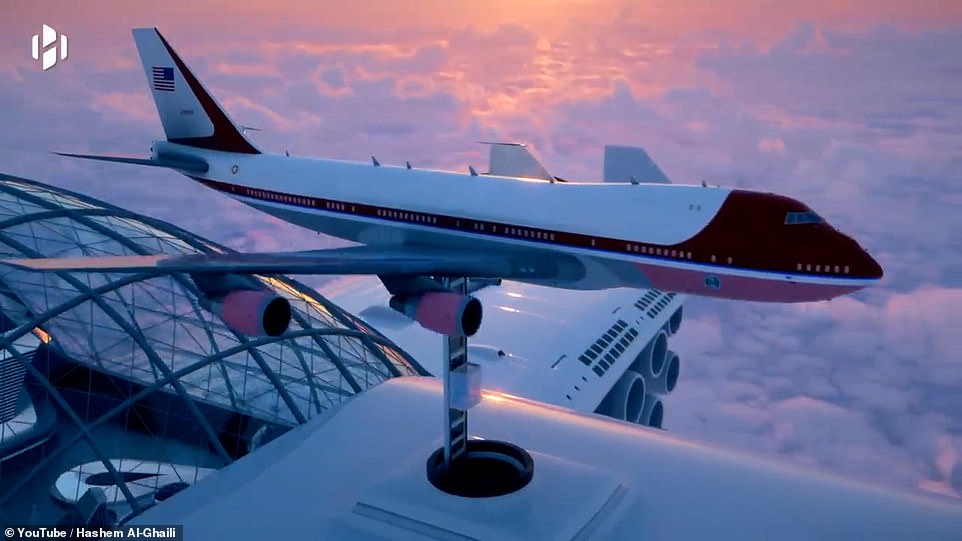 Compared to a regular-sized jumbo jet (pictured above the Sky Cruise’s left wing), the airborne cruise ship is a flying monolith

And how much crew there’d need to be isn’t obvious, either.

Answering a Facebook comment asking how many pilots would be needed to fly the monolith with wings, the designer simply said: ‘All this technology and you still want pilots?’

‘I believe it will be fully autonomous.’

Whether or not the technology could ever be placed on a jet like this one and taken into the sky is a whole other question.

Second, no runway ever conceived would get close to housing this beast of technological ambition.

An entire custom airport for one take-off would probably be necessary.

That begs the question of cost, which Mr Al-Ghaili boldly appears not to have considered at all.

Another Facebook commenter took the idea a little too seriously, writing: ‘How about imagining eliminating world hunger instead of other rich people’s luxury toys?’

One Twitter user asked, ‘Did somebody clone Howard Hughes?’, referencing the notorious playboy aviator and inventor who built the world’s biggest plane – and only flew it once, before vanishing from public life altogether. 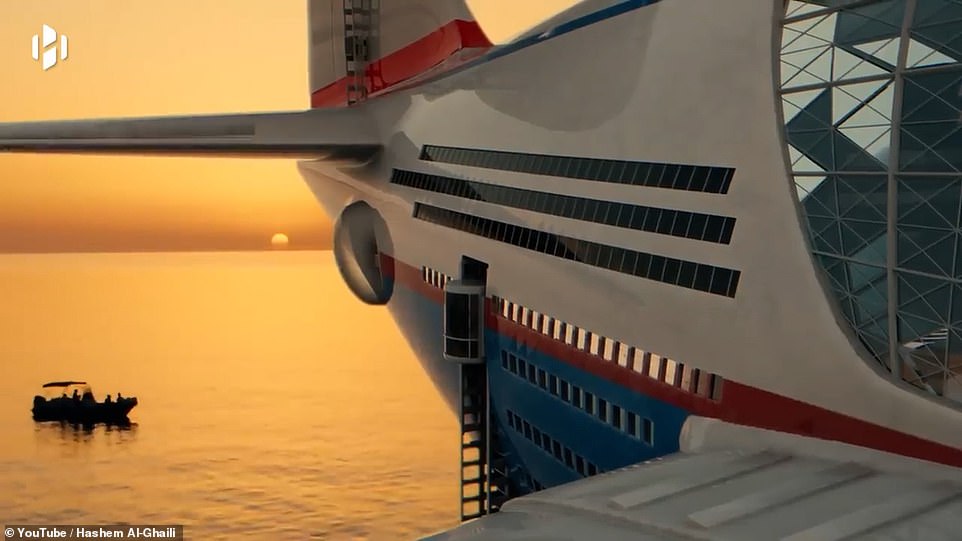 Yet not everyone is quite convinced by Al-Ghaili’s sunny optimism, with some comparing the plans to the Titanic 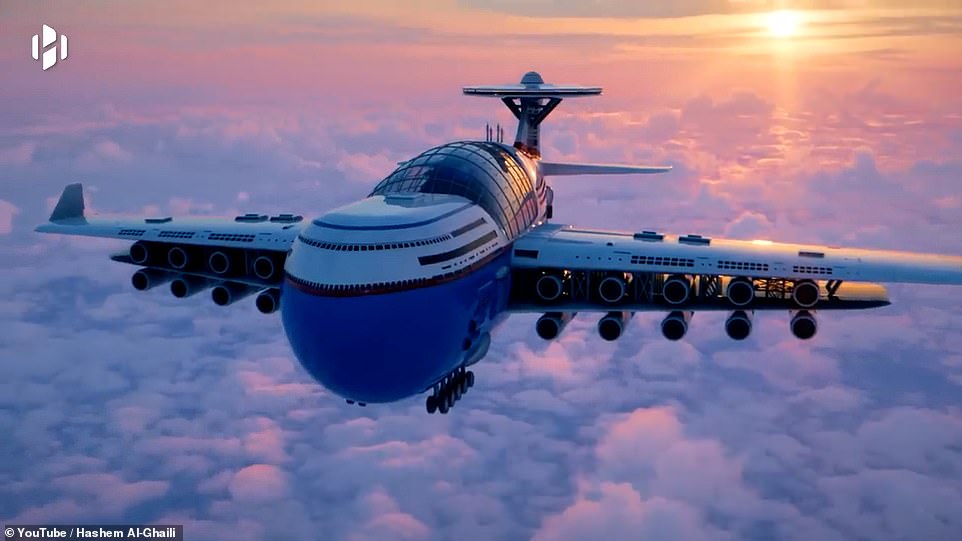 A naysayer said of the plans: ‘Great idea putting a nuclear reactor in something that could malfunction and fall out of the sky’

Another said: ‘Great idea putting a nuclear reactor in something that could malfunction and fall out of the sky.’

One person pointed out that were it to crash, 5,000 people might be killed.

That would be by far the biggest transport disaster in history – and probably prompt an entire series of Air Crash Investigations rather than a single episode. 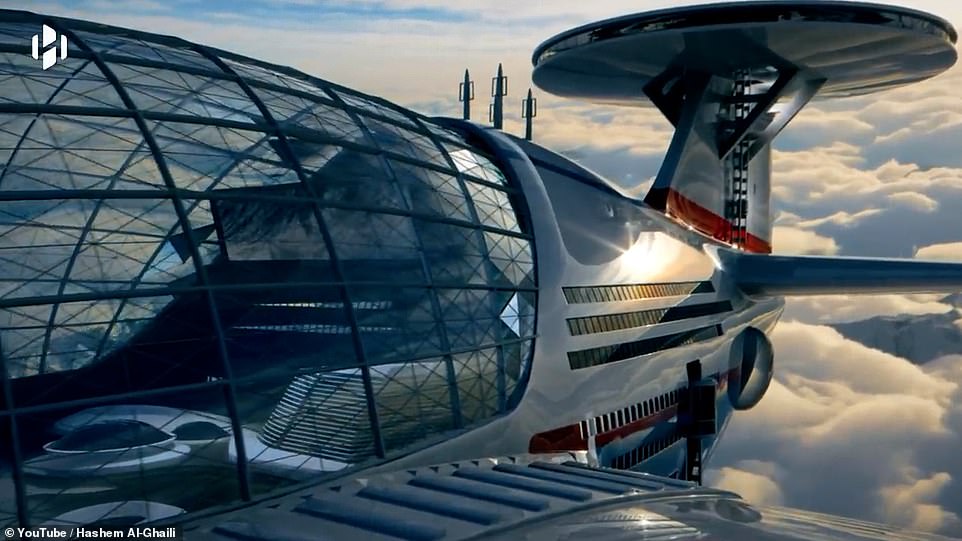 One optimist wrote: ‘It’s like someone got in a time machine, traveled to 2070, found a retro-futurism video based on our era’ 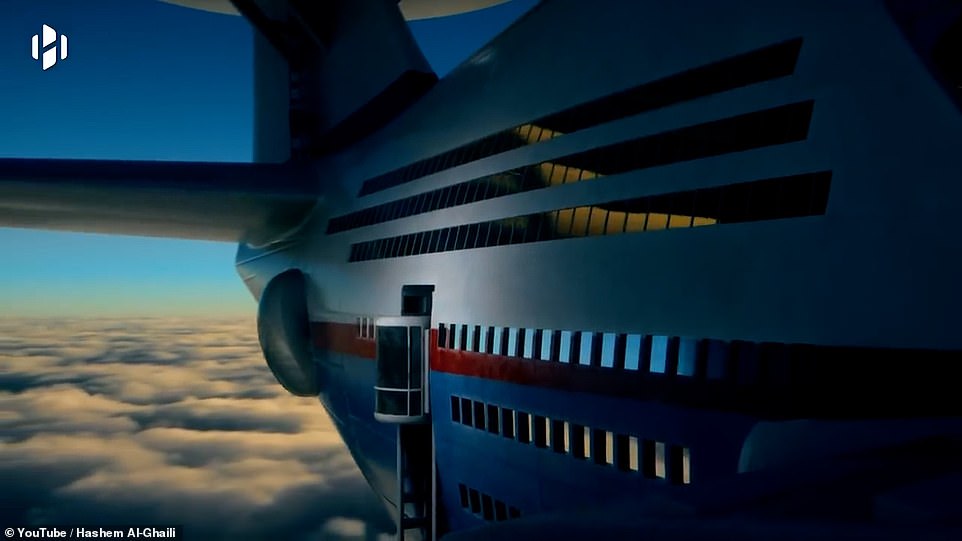 Yet regardless the ship’s incredible design and futuristic features, the prospect of a screaming child can never be ignored

Yet not all were naysayers. One Twitter user seemed optimistic, writing: ‘Hilarious!

‘It’s like someone got in a time machine, traveled to 2070, found a retro-futurism video based on our era (as opposed to the 1950s or 1800s) depicting what people from our era thought our future would look like.’

They wrote: ‘I bet I still end up next to someone else’s screaming three year old for the entire trip.’