Footage of police knocking a female protester to the ground before dousing her with OC spray during Saturday’s anti-lockdown protest is being investigated by professional standards officers.

The investigation comes amid a formal complaint set to be lodged by The Age after experienced photographer Luis Ascui and another member of the press were also sprayed with capsicum foam as parts of the protest turned hostile. 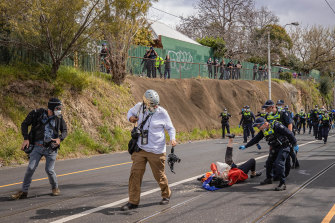 Footage of the incident shows the woman, wearing an Australian flag being pushed backwards and falling to the ground, covering her face with her hands, before a uniformed officer leans over her and sprays her to the face.

Seconds earlier Ascui, who was photographing the melee, was also sprayed to the face despite identifying himself as a media representative, before others came to his aid.

“Victoria Police is aware of a video on social media showing an interaction between police and a protester in Melbourne on Saturday. Police anticipated a highly volatile situation on the weekend and had strongly urged people to refrain from participating in protest activity,” police said.

“Despite warnings an estimated 700 people protested in clear breach of the Chief Health Officer’s directions.

“The incident circulating on social media has been referred to professional standards command and will be investigated.“

Police sources said it was understood the woman was yet to make an official complaint herself with inquiries into her identity “pending”.

Hundreds of demonstrators marched from Bridge Road in Richmond to a cutting on Barkers Road in Hawthorn on Saturday as part of the rally.

They had originally planned to march through the CBD but changed their location hours before the protest after Victoria Police and the state government moved to shut down public transport into the city.

Footage of the redirected protest shows few demonstrators were left in the area when a contingent of police moved through and members of the media were accosted.

Ten police were injured during the protest with six taken to hospital. A further 235 demonstrators were arrested as they broke through police lines near Richmond early on Saturday afternoon.

There, protesters also hurled projectiles and abuse at authorities before surging through the police line, screaming and being soaked in capsicum spray as they went. One female police officer was trampled in the chaos, with scuffles breaking out along the road.