Russian military manoeuvres are being closely scrutinised due to a troop buildup near Ukraine that has prompted fears in Kyiv and the West that Moscow may be planning to invade. Russia denies any such plan.

In response to the Cyber Attack, EU foreign policy chief Joseph Borrell said on Friday the bloc is mobilising ‘all its resources’ to aid Ukraine.

No breakthrough was reached at meetings between Russia and Western states this week, which fear Moscow could launch a new attack on a country it invaded in 2014.

Russian Foreign Minister Sergei Lavrov said on Friday that all communication channels between the EU and Russia are now closed.

The events came the day after Poland warned Europe faces its greatest threat of war in the last 30 years, and as Russia threatened ‘military means’ if its demands over Ukraine were not met by the West.

‘The drumbeat of war is sounding loud,’ added senior U.S. diplomat Michael Carpenter, last night as talks to find a diplomatic solution to the worsening situation between Russia and Ukraine teetered on the brink of collapse. 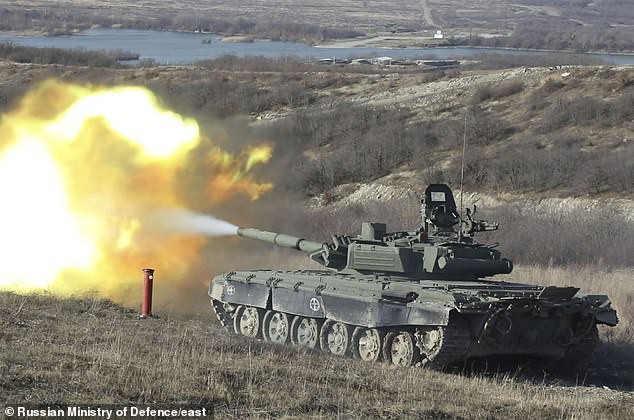 Pictured: A tank takes part in a military drill in Russia. Russian military manoeuvres are being closely scrutinised due to a troop buildup near Ukraine that has prompted fears in Kyiv and the West that Moscow may be planning to invade. Russia denies any such plan

‘The exercises will make it possible to assess the readiness of the troops… to carry out missions as required after regrouping at far distances across Russian territory,’ the ministry was quoted as saying.

Open-source intelligence analysts have for weeks been studying social media footage of Russian military hardware being transported, including by train.

Russia says it is up to Moscow alone where it moves its forces around on its territory and that they pose no external threat.

Rob Lee, a military analyst and a fellow at the U.S.-based Foreign Policy Research Institute, said the drills would test the ability of units to complete missions after conducting long-distance travel.

‘This is likely cover for the units being moved towards Ukraine,’ he tweeted.

‘As a result of a massive cyberattack, the websites of the Ministry of Foreign Affairs and a number of other government agencies are temporarily down,’ a foreign ministry spokesman told AFP.

The education ministry wrote on Facebook that its website was down due to a ‘global (cyber) attack’ that had taken place overnight.

The website of the cabinet and the emergencies ministry were also targeted in the attack, with services later restored to the government site.

There was no immediate claim of responsibility and Kyiv did not say who may have been responsible. Ukraine had blamed Russians with links to the Kremlin for previous attacks. 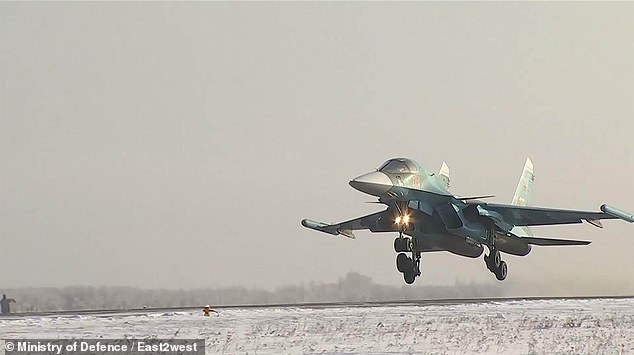 Pictured: A fighter jet is seen taking off in footage released by Russia’s military ministry of defence. Amid concern over Russia’s troop movements, Russia says it is up to Moscow alone where it moves its forces around on its territory and that they pose no external threat 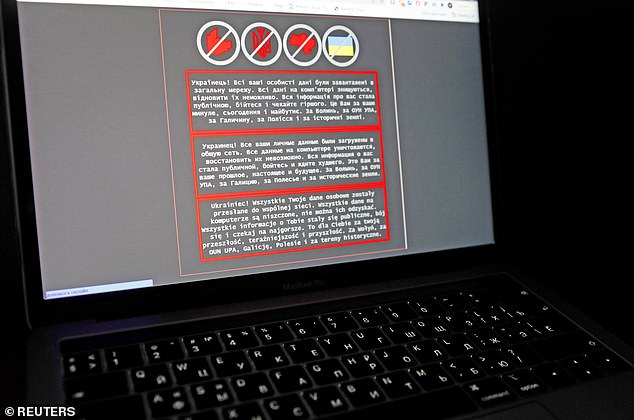 The inspections came as several key Ukrainian government websites were taken offline Friday, authorities said, in a sweeping cyber attack. Pictured: A laptop displays a warning message in Ukrainian, Russian and Polish, that appeared on the official website of the Ukrainian Foreign Ministry after a massive cyberattack, in this illustration taken January 14, 2022

‘Our specialists are already working on restoring the work of IT systems, and the cyber police opened an investigation,’ the foreign ministry said.

The foreign ministry website earlier Friday was displaying a message in Ukrainian, Russian and Polish languages.

‘Ukrainians! All your personal data … have been deleted and are impossible to restore. All information about you has become public, be afraid and expect the worst.’

‘This is for your past, present and future,’ it said, mentioning two ultra-nationalist organisations in Ukraine.

The education ministry said that authorities – including the SBU security service and cyberpolice – were working to address the issue.

Later, the government said that the content of Ukraine’s government websites was not changed during the cyber attack and no personal data was leaked.

Russian hackers linked to Moscow have repeatedly been blamed for cyber attacks on Ukrainian government websites and infrastructure in the past.

The European Union said it is mobilising ‘all its resources’ to aid Ukraine after the cyberattack, EU foreign policy chief Josep Borrell said. 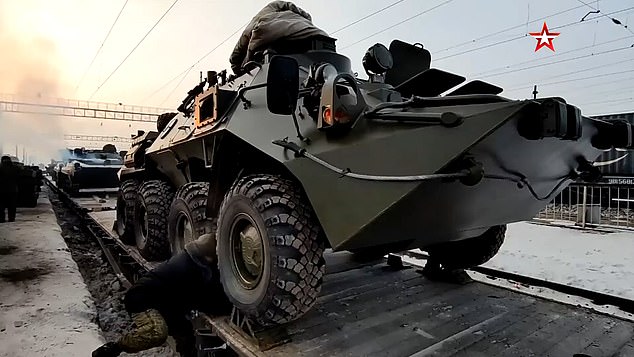 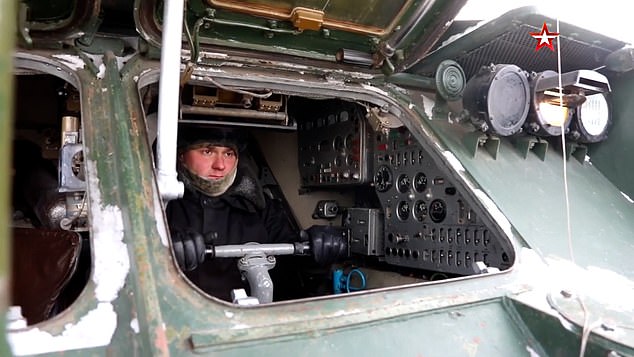 Open-source intelligence analysts have for weeks been studying social media footage of Russian military hardware being transported, including by train. Pictured: A man is shown operating a Russian armoured vehicle 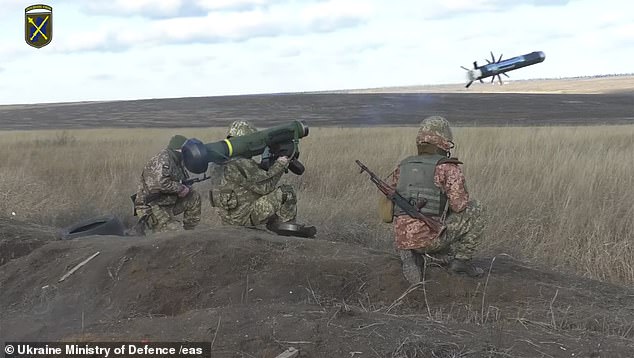 Pictured: Ukrainian troops take part in military drills as tensions across the country’s border with Russia continue to mount

Borrell said the EU’s political and security committee would convene later on Friday for an urgent meeting on the attack, which he said ‘merits condemnation’.

The EU’s rapid response cyber unit was also being activated, Borrell told reporters on the margins of an EU foreign ministers’ meeting.

‘We are mobilising all our resources to help Ukraine deal with this type of cyberattack,’ he said.

All EU governments were being asked to participate, ‘even though Ukraine is not a member’ of the bloc.

Borrell said it was too early ‘to point the finger at anybody. We don’t have proof’.

But he added: ‘You can imagine who did this.’

The attack comes as tensions between Russia and the West are soaring over Ukraine, an ex-Soviet country and close ally of the United States and Europe.

The West has accused Russia of deploying tanks, artillery and about 100,000 soldiers on Ukraine’s war-torn eastern border in recent weeks, in what NATO says is preparation for an invasion.

Moscow says it has no plans to invade Ukraine. 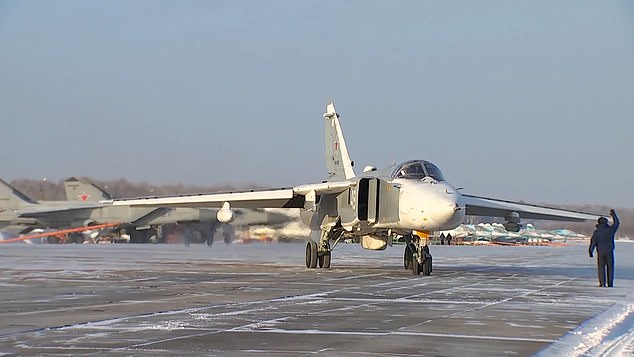 Pictured: A Russian plane is shown in video released by the Russian military on Friday 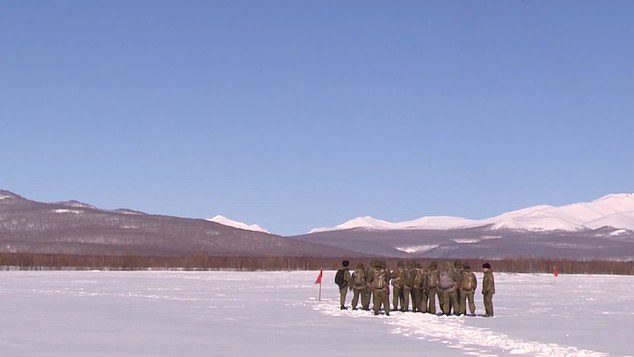 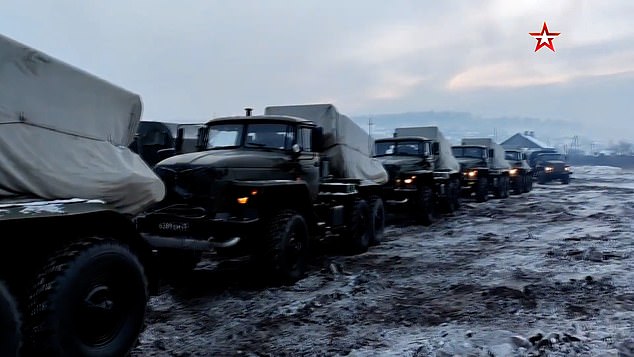 The West has accused Russia of deploying tanks, artillery and about 100,000 soldiers on Ukraine’s war-torn eastern border in recent weeks, in what NATO says is preparation for an invasion. Russia has denied it plans to invade

In December, Russia unveiled proposals to contain the United States and NATO in the former Soviet Union and Eastern Europe, saying that the US-led alliance should not admit Ukraine or Georgia as new members.

This week’s negotiations in Geneva and a related NATO-Russia meeting in Brussels were held amid a significant Russian troop buildup near Ukraine that the West fears might be a prelude to an invasion.

Russia, which annexed Ukraine’s Crimean Peninsula in 2014, has denied having plans to attack its neighbor but warned the West that NATO’s expansion to Ukraine and other ex-Soviet nations is a ‘red line’ that mustn’t be crossed.

Washington and its allies firmly rejected Moscow’s demand for security guarantees precluding NATO’s expansion, but Russia and the West agreed to leave the door open to possible further talks on arms control and confidence-building measures intended to reduce the potential for hostilities.

British Prime Minister Boris Johnson has warned of his ‘grave concerns’ of a Russian invasion of Ukraine with an appalling cost in human lives.

He cautioned Vladimir Putin not to close the door on talks to diffuse the crisis, joining with NATO secretary general Jens Stoltenberg to demand a Russia de-escalation.

His intervention came as Moscow signalled a ‘dead end’ in talks with the West, amid further intense war games by Kremlin’s forces.

On Thursday, Deputy Foreign Minister Sergei Ryabkov said Moscow saw no reason to hold a new round of security talks with the West following a lack of progress.

Ryabkov also said he did not rule out the possibility that Moscow could deploy forces to allies Venezuela or Cuba if diplomacy failed.

But in the same interview with prominent TV presenter Tina Kandelaki on RTVI he hit out at Britain and the US, claiming London was in the vanguard of the West’s perceived uncompromising stance.

She had claimed that British officials ‘simply hate’ Russia and ‘put in a lot of effort to ensure our relations with the US and with the rest of the world are in a state of constant escalation’.

He said: ‘I am certain, I don’t even need to read it – the Anglo-Saxon group, North America, Great Britain were the toughest in their attacks on us and on politics.

‘This is fact without a doubt.

‘So there is no way we can speak about London’s constructive role.’

In 2020, the United States in October charged six Russians with carrying out cyber attacks on Ukraine’s power grid, the 2017 French elections and the 2018 Winter Olympics.

The justice department at the time said the six were current or former members of the GRU – Russian military intelligence and were also accused of staging a malware attack called ‘NotPetya’ that infected computers of businesses worldwide causing nearly $1 billion in losses.