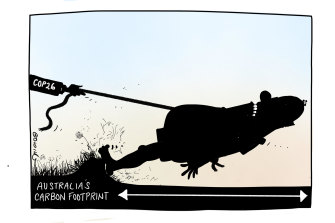 To submit a letter to The Age, email letters@theage.com.au. Please include your home address and telephone number.

People’s preparedness for any challenge is revealed by two important indicators – the pace at which they respond and the examples they use to justify their position.

The Morrison government is in chaotic last-minute preparations for COP26 although the date was set several years ago. Downplaying the prospects of jobs in renewables, Nationals senator Bridget McKenzie, said the promise of jobs in the sector was a “mirage” (“UN pressure on emissions rising as key Nats resist”, The Age, 14/10) and used the example of a solar farm employing only five people, most of whom just cut the grass under the solar panels, to make her case.

Both demonstrate the mind-set of a government that is hopelessly inadequate for tackling the challenges of climate change. A response we are all vitally dependent on.
Howard Tankey, Box Hill North

The arts lead the way
How refreshing and exciting to see a story about Alexander Rodrigues conducting for The Australian Ballet in The Sunday Age (“Rocket science? Try conducting a ballet”, 10/10).

And as one of the orchestra musicians who may soon be heading back to rehearsing together in the studio and performing on stage, my heart is singing. Once again, the arts lead the way in lifting one’s spirits.
Tania Hardy-Smith, Mitcham

A joyful time awaits
The announcement by Victoria’s Minister for Creative Industries, Danny Pearson, has brought me to tears (“Cartwheels on the cards over return of rehearsing together”, The Sunday Age, 10/10).

After long COVID lockdowns, uncertainty, fear, disappointments and stress I’m excited and longing to once again sit in a Melbourne theatre to nourish my worn-out soul.

And as the curtain closes I will stand with the audience to loudly applaud and cheer the wonderful artists and everyone involved who brought this to fruition … actors, writers, musicians, technical support, directors, ticket staff, ushers and so many more who for too long have been forgotten, sidelined and financially neglected.

Yes, there will be many tears shed, but the arts will give us all the lift we need. A joyful time awaits.
Lorraine Ryan, Templestowe

Put it to a panel
For the incredibly vulnerable people still choosing to remain unvaccinated, it is essential vaccination exemptions are only obtainable from a public health panel (“Trusting doctors with exemption guidelines”, Letters, 16/10).

All aboard …
As I read that Barnaby Joyce says an extension to the Melbourne to Brisbane inland rail project to Gladstone can be “booked in” as a federal election promise to help shift future coal exports from the Surat Basin, I am hearing the wonderful sound of a steam train at the Newport station (“Joyce makes coal train a poll pledge”, The Age, 15/10).

I think one of those trains would be the perfect vehicle to carry Barnaby’s coal.
Carol Reed, Newport

An irrelevant party
Deputy Prime Minister Barnaby Joyce’s commitment to extending the inland rail project from Brisbane to Gladstone highlights the increasing irrelevance of the federal National Party. The railway extension has been ruled out by “a series of feasibility studies” and would mainly be used to transport thermal coal, a commodity without a future.

By championing fossil fuels, ignoring opportunities to protect their constituents from worsening droughts, floods and fires and delaying an economic transition that will create jobs in the regions, Mr Joyce is making his party look like a bunch of Luddites who fear the future.

There is a real risk his short-term opportunism will backfire at the next federal election and contribute to the success of more independents like Helen Haines who reflect their regional communities’ desire for effective climate action and long-term, sustainable economic opportunities.
Matilda Bowra, Fitzroy North

We all have a say in this
On coming to power in 1983, Bob Hawke held the National Economic Summit, bringing together all political parties, unions and employer organisations.

Hawke’s consensus style of political leadership is needed now, more than ever, to face the existential threat of our age – climate change. Our current combative political environment cannot achieve a position Australians can all agree on or live with. As noted recently, climate change policy has been the graveyard of many PMs.

This issue is all encompassing, with far-reaching effects on all Australians far into the future. We must all have a say – political parties, business, unions, activists, the farmers, experts, the quiet Australians, we are all stakeholders.

Scott Morrison should announce a “climate summit” and bring together all stakeholders to thrash out a climate policy in a genuine non-partisan forum and try to achieve a national consensus.

“Bringing Australia Together” was Hawke’s mantra, and we need it now more than ever.
Wayne Alexander, Eltham

The answer is ‘yes’
Your correspondent (Letters, 16/10) asks: “if a person chooses not to vaccinate, are they asking to die from COVID-19?”

The Age’s editor, Gay Alcorn, writes an exclusive newsletter for subscribers on the week’s most important stories and issues. Sign up here to receive it every Friday.