The Victorian government’s top construction industry adviser has quit in protest over controversial new rules for the sector that sparked demonstrations from tradespeople last week and led to vandalism of the building union’s head office.

Union and industry leaders said they received minimal notice and provided no input to the government’s decision last week to close tearooms and ban employees from working if they had not received their first coronavirus vaccination within a week. 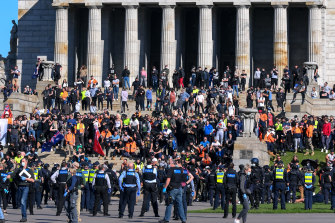 Police and protesters face-off at the Shrine of Remembrance on Wednesday.Credit:Eddie Jim

Circumstances of his departure were confirmed by four union and industry sources speaking anonymously to discuss the relationship between the Health Department and union and employer groups, which one source said had “disintegrated” in the three weeks leading to the shutdown.

They said Mr Parkinson, who declined to comment when contacted by The Age, had expressed his concerns to the government, which caused tension about whether it was tenable for the chair of the council to be at odds with the government that appointed him.

The protest movement that began with anger among tradespeople about the vaccine mandate intensified this week. Public protests have grown to include groups outside the construction industry, such as far-right and anti-vaccination activists.

Wednesday’s protest took the form of a sit-in at the Shrine of Remembrance, where police used tear gas and non-lethal rounds to end a tense stand-off on a day when the state recorded 628 new coronavirus infections. Police, the RSL and the chair of the Shrine described the protesters’ choice to occupy the memorial as disgraceful and disrespectful.

On Monday, an angry mob confronted building union leader John Setka outside the Melbourne offices of the Construction, Forestry, Mining and Energy Union (CFMEU). The following day thousands of protesters swept across the city and stopped traffic on the West Gate Bridge after several violent incidents across the city.

Victoria’s peak union body, the Trades Hall Council, the Master Builders Association of Victoria, the Property Council and the Housing Industry Association told The Age aspects of the government’s information-sharing and decision-making last week were poor.

The tearoom ban led to Friday’s protests, in which union members ate in the middle of CBD streets to show that closing tearooms was unworkable – a view shared by some unions and industry groups. 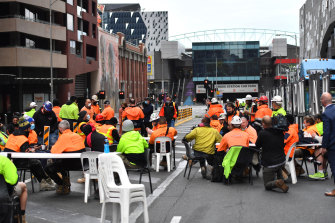 On Monday morning, CFMEU officials arrived at work sites demanding eight hours’ pay for six hours’ work because lunch breaks were made difficult by the ruling. After several large builders rejected the deal, workers walked off sites and many headed to the CFMEU’s head office to protest.

The impasse prompted the Treasurer to tell industry leaders on Monday morning – before the protests – that the sector would probably shut if a compromise could not be reached, and it was closed that evening.

Trades Hall secretary Luke Halikari said the health directions “did not have a lot of consultation” and earlier dialogue could have avoided confusion.

“I don’t think everyone understands what those lunch sheds are. They are not garden variety sheds, they are auditoriums with hundreds of tables with cleaners cleaning them regularly,” he said, adding he understood the pressure faced by Professor Sutton’s team to make swift decisions.

“What needed to be done was to have a deeper conversation about if sheds are a dangerous place, what mitigation measures could have been put in place, or what alternative arrangements could we have had.” 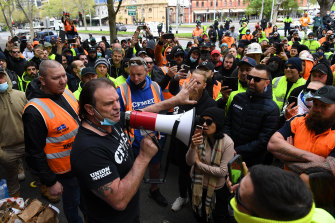 CFMEU secretary John Setka addressing workers outside the union headquarters in Melbourne on Monday, before the protest turned violent.Credit:AAP

The government put the industry on notice for weeks leading up to the shutdown and warned that industries may be targeted for mandatory vaccinations.

A government spokeswoman said the message to the sector had been clear. “Pick up your game or we wouldn’t hesitate to act to keep Victorians safe and stop the spread,” she said.

Fresh state government data provided to The Age highlights the growing level of transmission within the sector. Between February 2020 and August 4 this year, 160 coronavirus cases were linked to the sector, compared with 337 since August 4.

Property Council chief executive Danni Hunter said the Health Department’s consultation about the health directions “left a lot to be desired”. Both she and Opposition Leader Matthew Guy said it was unreasonable to give workers seven days to be inoculated before they would be banned from sites.

“With the benefit of hindsight, that was a really short time frame,” she said. “Aged care workers were given 10 weeks.”

“We provide advice and feedback and offer for [health officials] to tour sites, but these weren’t taken up.”

The concerns held by unions and peak bodies were shared by Mr Parkinson, a veteran union official and industrial relations expert who was appointed by the government early last year to foster employer and union cooperation through the pandemic.

Mr Parkinson had expressed his concerns in the past month about what one industry source described as the “disintegrating” relationship with Professor Sutton’s team. The source said health officials had stopped engaging with sector representatives by the time of last week’s announcements.

The building council asked the government to formulate a solution to allow safe use of tearooms, but the group was not consulted and was instead informed that a decision had been made to prohibit use of the sheds. 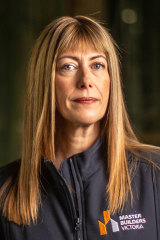 The tearoom ban was one of several components of new health directions that attracted criticism from the industry. One ruling which banned drinking water on a work site was revoked over the weekend amid crisis talks between government officials and sector leaders.

Master Builders Association of Victoria chief executive Rebecca Casson said her organisation had attempted to seek clarity on the nature of non-compliance in the sector, but that information was not forthcoming.

“We have struggled to get data from the health team in relation to our industry’s COVID compliance. However, there has been a marked improvement in engagement this week,” she said.

Both Mr Halikari and the Housing Industry Association’s Fiona Nield said the rules curtailing the entire industry may have lacked nuance in differentiating between groups in the industry, which includes builders of large apartment complexes and smaller residential builders.

“Many of the new requirements introduced in the directions last week seems to be more appropriate for implementation on the large-scale construction sites,” Ms Nield said.

“Further consultation and engagement directly between health and the small-scale building industry would be useful to assist our sector manage the new requirements.”

Stay across the most crucial developments related to the pandemic with the Coronavirus Update. Sign up for the weekly newsletter.