The University of NSW has launched a review of allegations of research misconduct in several taxpayer-funded studies. The research was into ageing and was undertaken by scientists at Australian and overseas universities.

The review comes after a well-known scientific sleuth went public with allegations some papers showed evidence of image or data error, or manipulation. 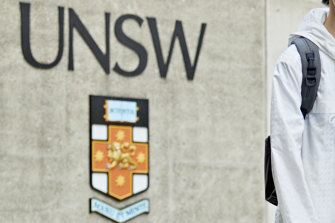 A student at the University of NSW in January, before travel bans were put in place.Credit:Yianni Aspradakis

If the allegations were upheld, it would be a significant blow to the university and the field of anti-ageing research.

“UNSW Sydney is aware of the concerns, and we are managing these concerns in accordance with our research misconduct procedure. It would be inappropriate to comment any further at this stage,” a spokeswoman for the university said.

The coronavirus pandemic has shifted potential scientific fraud from a fringe issue to a major public health concern. A large number of papers – including several published in major journals – supporting the use of hydroxychloroquine and ivermectin to treat COVID-19 were pulled when they turned out to be based on non-existent or flawed data.

In Australia, research misconduct is self-regulated, with universities conducting their own investigations. Senior scientists have claimed in the past that this encourages a culture of cover-up.

In September, several critics raised public concerns about papers published by a team of Australian and international researchers. The papers largely focused on brain ageing and degeneration, and potential techniques for slowing it. One study tested the use of a mushroom extract, another looked at a citrus extract, and a third pomegranates.

One study is highly significant: a 2011 paper, published in PLOS ONE, suggesting a compound called NAD+ played a major role in staving off the ageing process; it has been cited more than 400 times.

This “seminal” study underpinned work around the world to develop anti-ageing drugs that increased NAD+, according to the study’s lead author Dr Nady Braidy.

Dr Braidy was promoted in 2019 to lead the Brain and Ageing Lab at the University of NSW’s Centre for Healthy Brain Ageing. In September, he won a $1.57 million government grant to study NAD’s role in ageing and dementia.

Also in September, critics of the 2011 article claimed on PubPeer – a website that allows scientists to comment on each other’s papers – that some images in the paper had been reused multiple times to represent different findings.

In multiple papers, other commentators have publicly alleged experimental data was manipulated.

Many of the allegations were made under the name Elisabeth M Bik. US-based Dr Bik is a widely lauded image detective, who scans published papers for potential academic fraud. Her previous work has led to hundreds of retractions and corrections.

Dr Bik did not reply to a request for comment. The Age and the Herald sought comment from the nine Australian authors on the papers, including Dr Braidy, but none replied.

Nibaldo Inestrosa, the Chile-based lead author of a 2015 paper that featured alleged image duplication, said he was surprised by the allegations.

“At the moment, I am asking my former collaborators and students, who process the samples of the figures, to see what happened. Most of them, as you can imagine, have already left the lab.”

Several of the authors involved hail from the University of Sydney. A spokeswoman said the university had received no complaints about the articles, and was not the lead institution on the publications.

“As the corresponding authors for these papers are not from the University of Sydney, we do not propose to take further action in relation to these concerns at this point,” she said.

Several studies that are the subject of allegations were funded by taxpayers via the National Health and Medical Research Council.

The council said it had no ability to investigate research misconduct but must be notified by universities if concerns about research arise.

“NHMRC does not provide information on complaints or concerns it receives about matters related to research integrity for privacy reasons and to preserve procedural fairness and the integrity of investigations,” a spokeswoman said.

Do you know more? Email the journalist securely: liam.mannix@protonmail.com

Liam Mannix’s Examine newsletter explains and analyses science with a rigorous focus on the evidence. Sign up to get it each week.