Western Australia’s Health Department has refuted claims by a former hotel quarantine security guard, denying a quarantine guest could have been left forgotten for three months at the InterContinental Hotel late last year.

The security whistleblower, who wished to remain anonymous for work reasons, was employed by a subcontractor at the hotel for three months until November 2020, saying the stress of working in such an unhygenic environment that wouldn’t provide masks or sanister drove him to quit. 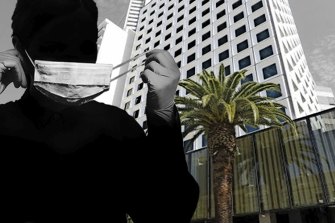 The department initially did not respond to detailed questions about his allegations and instead referred WAtoday to the Premier’s office spokesman’s six-sentence quote. Once published, the department delivered answers.

According to a spokesperson, WA Health was not aware the guard had begged for a mask and sanitiser and never received it, and being told to keep his mouth shut by security management was a question for his employer.

“In line with Australian Health Protection Principal Committee advice at the time, mandatory wearing of masks for security guards who were not in direct contact with guests was not a requirement at WA state-run quarantine hotels in September and November 2020,” they said.

“However all security companies supplied staff with ‘grab bags’ of personal protective equipment – for use should a security guard need to interact with a guest.

“The WA Department of Health implemented the requirement for security guards to wear masks at all times following the transmission to ‘case 903’, on January 31, 2021.

“From this date, security staff were supplied this PPE by the Department of Health.”

As to the guard’s claim quarantining guests would constantly walk out of their rooms to abuse him, so much so he gave up calling for police assistance, the spokesperson said it was unsubstantiated.

“The InterContinental Hotel has had a static WA Police presence since mid-August, and had officers on site should there be an issue,” they said.

The guard told WAtoday by the time police stationed outside the hotel arrived at his floor, the guests had often returned to their rooms.

His claims were backed by former WA chief health officer Tarun Weeramanthri’s report into hotel quarantine, which found 20 per cent of the 2360 issues lodged were guests coming out of their rooms, while 80 assaults were also reported.

The guard’s issues as a self-confessed germaphobe over the filth he experienced in shared staffing areas were downplayed by the department, which said cleaning occurred daily – twice daily for bathrooms.

“Like all workplaces, staff also need to take responsibility for their own food and rubbish,” they said.

And they outright denied a man from China stayed at the hotel undetected for three months, well beyond his quarantine, because no one told him he could go until a nurse made the discovery.

“There are instances where guests are required to extend their stay when they test positive [to COVID-19]. For example, where a guest is positive on day 12, they will be required to stay until they are cleared by Public Health,” they said.

“The people sharing their room will be required to stay for a further 14 days since last contact with their infected room mate and at times families cannot be separated resulting in prolonged stays.

“There has not been any occasion that a guest has stayed for three months.”

In Parliament question time on Tuesday, Liberal leader David Honey asked Premier Mark McGowan if he was confident the system was working, with news a hotel quarantine security guard had been recently stood down and another investigated for holding more than one job.

Mr McGowan said he wasn’t aware of such action but it would be in accordance with the requirements his government brought in following Dr Weeramanthri’s investigation earlier this year.

“If someone has been stood down it’s because they breached the rules; that would indicate the rules are working,” he said.

“We’ve upped the requirement for PPE, we’re phasing out three hotels, a whole range of things to keep the system safe and secure. And we’ll continue to do so.

“But as I’ve said repeatedly, the system itself is not perfect. It was never designed for these purposes.”